Lesley Mashimbye’s father wanted to abandon him at the hospital. Family members were so embarrassed when he visited, they wanted him kept him inside a bedroom. The 13-year-old suffers from cerebral palsy and spina bifida.

“They make me feel sad,” he says about the intolerance he’s faced from extended family members, neighbours and people in the community. “I want people out there to see me as a dignified person and I want them to love me.”

In South Africa, children with disabilities are often viewed as a curse by their families.

“They hide away those children. They don’t want their communities to know, because they believe their communities are going to judge them,” says Onyi Nwaneri, communications director with the non-profit group, Afrika Tikkun.

“If you start by eliminating the fear in their head and give them an understanding that every child has a right and that child’s rights needs to be facilitated, that’s a starting point.”

The government estimates as many as 600,000 children with disabilities aren’t getting an education. The pervasive stigma is just one factor. Lack of resources and access are daunting obstacles.

“The barriers to access is multiple and overwhelming and what you find in most families, who already have prejudices around their children, is that they give up.”

Lesley’s mother Maria refused to give up, however. She says her son was rejected from 10 schools and neglected at others, causing the wheelchair-bound boy to get open wounds on his feet. She filed a lawsuit and things improved. Now, he’s thriving at school.

“Our journey was really painful,” says Lesley. “But now it’s better. I am happy. I have nice friends. They are very good to me.”

But Lesley’s school is an hour away from their home in Orange Farm, near Johannesburg. His mother, the sole breadwinner, must pay a driver to transport him back and forth. It’s an economic hardship. “This is my son and I will fight for him,” says Maria Mashimbye.

The Department of Basic Education says it’s devoted more money to schools for children with special needs. It’s also raising awareness among parents and reaching out to other governmental agencies, civil society groups, and universities to help get children with disabilities out of their homes and into classrooms.

“You can’t fault parents or whoever thinks maybe the department is not doing enough,” says Moses Simelane, director of Inclusive Education. “The general public needs to understand as Basic Education alone, we can’t manage. We can’t achieve much. We need all hands on deck. That’s the only way we believe we’re going to make a difference.”

To combat the intolerance in their community, Lesley’s mother launched a campaign. She painted her house purple to promote pride for children with disabilities. House by house, other families have done the same and created a network of support, Maria says.

“It is not only Lesley. Now, my vision is to fight for each and every child to go to school.” 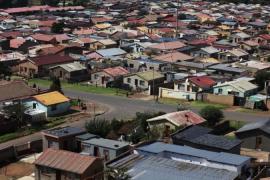 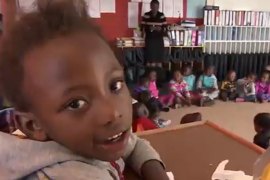 Human Rights Watch says 500,000 disabled children have been excluded from the education system.