The 15th annual conference, which ended on Saturday, saluted Palestinian prisoners in Israeli jails, describing them as “freedom fighters” and demanding international law to pressure Israel for justice.

The event brought together thousands of Palestinians from across Europe as well as Dutch politicians, and Arab intellectuals that discussed issues central to the Palestinian cause in parallel panels and exhibitions.

Among the discussed topics were the Palestinian right of return to the homes they were expelled from in 1948, when Israel was established, as well as the illegal Israeli settlements in the occupied Palestinian territories, and the state of the refugees.

Though organisers were faced with efforts from pro-Israeli activists to block the conference, who called it a “gathering of terrorists”, the one-day event was successfully held.

“Holding this conference for 15 continuous years is a clear indication of an institutional, rooted, cultivated work to build a Palestinian European commitment to the work for the rights of Palestinians, especially with new Palestinian generations born in Europe,” Hossam Shaker, a Palestinian media adviser from Jaffa, told Al Jazeera.

Shaker, who has been living in Austria for 25 years, and participated in the “Palestinians in Diaspora” discussion, said he views the gathering as a signal to the Palestinian diaspora’s consciousness of their responsibility towards Palestine, especially in the current critical political situation.

Al Jazeera’s Palestine Remix interactive project was suggested in the final statement of the conference as a tool to be used within the Palestinian European communities.

The event also featured a number of workshops, seminars, and exhibitions as well as cultural shows.

Ahmad Muhaisen, vice president of the Union of Palestinian Communities and Associations in Europe, a Palestinian from Nilin village near Ramallah, born in Amman and living in Germany for 40 years, remembers the first Palestinian European conference in London in 2003.

“I did not expect that it will be that big in the years to come,” he said. “I attended the 2003 conference and did not know any of the organisers. Yet, it was clear in the second conference in Berlin, [in] 2004, that there is a huge Palestinian community eager to make this conference a real landmark.”

Ghassan Faour, vice chairman of the Palestinian Return Centre (PRC), agrees. “The conference was a small idea. The London first one was small, but we took the decision to hold it every year in a different capital or city in Europe.”

As the conference grew larger, said Faour, it became “clear that this is becoming a real institute”.

Over 500 volunteers from all ages worked for six months to organise the event. 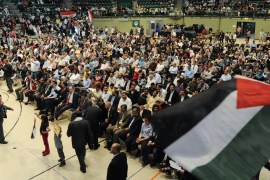 Thousands of Palestinians meet under the slogan ‘100 years on, a victorious nation and unbreakable determination’. 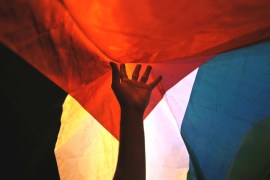