Al Jazeera’s Baher Mohamed, Mohamed Fahmy and Peter Greste, along with seven colleagues outside Egypt, were accused of spreading “false news” during their coverage of demonstrations protesting against the military overthrow of President Mohamed Morsi in 2013.

They were arrested on Sunday, December 29, that year.

Mohamed spent 437 days in jail, many of them in solitary confinement. He was finally freed in September 2015.

As journalists around the globe prepare to mark World Press Freedom Day on May 3, another Al Jazeera reporter, Mahmoud Hussein, remains in jail after being arrested on December 20, 2016.

Some of Hussein’s detention has also been spent in solitary confinement.

These are Mohamed’s reflections on his imprisonment, solitary confinement, and a weighing sense of guilt as many experience the same abusive treatment as he endured.

After a long day of interrogation, the person who has been questioning me says, with a fake smile on his face: “You know what? I believe you didn’t do anything wrong. I will send you to a nice place to rest.”

He leaves and the guards come in.

The guards place handcuffs on my hands. Then they drag me to a nasty and smelly police pick-up truck. I keep on asking: “Where are you taking me? And can you remove my handcuffs?” I don’t get an answer.

Finally, the pick-up truck stops after almost 45 minutes of driving.

I find myself inside a huge complex and in front of me there is a big steel gate. We wait for five minutes until someone brings the keys because the gate doesn’t open from inside.

Several officers are waiting for my arrival and one of them shouts at me: “Take off all your clothes immediately.” I ask him, “Why, where am I?”.

Another officer looks at me, smiling, and says: “You are in Scorpion maximum security prison.”

The first officer repeatedly shouts: “I said take off all your clothes, and I don’t want to hear you speaking!”

I remove my clothes and they hand me a disgusting polyester white uniform and two dusty, dirty blankets.

It is freezing, so I ask to keep my coat but the answer is: “We want you to freeze to death.”

Two officers and three guards walk me to my cell. I am pushed into a cell and the guard slams the door.

I find myself alone in a dark room; it’s around two square metres and surrounded by four cement walls. Broken toilet on the left and a filthy sink next to it. The sink is designed in such a way that when the tap is turned on, the water sputters everywhere.

There is nothing to sleep on and there are insects and cockroaches everywhere. Mosquitoes are all over the wall. There is a hole in the wall across the cell and it is covered with bars and wire mesh. I am shaking from the cold and I can’t use the blankets.

I take off my shoes, use them as a pillow, and lie on the floor. I am kept in this solitary confinement cell for 1,124 hours. I am not allowed visits from my family or my lawyer. During these hours, I don’t see the sunlight and am not allowed out, except for when I am sent for interrogation.

I have cried for nights and days. Nightmares wake me up almost every night. One night, I cry because I dream that my father has died and I know I won’t see him again. Another time, I cry the entire night because an officer threatens me that if I don’t sign fake confessions, he will torture and rape my wife and mother in front of me.

At a certain point, I need someone to speak to. This someone is “Wilson”. Wilson is an onion. Wilson helps me a lot and is a good listener.

I keep asking myself, why am I here? I did nothing wrong. I was only doing my job professionally. That leads me to realise that I’m in prison for something bigger than me.

I’m in prison for a cause, I’m in jail for press freedom. I have to stand strong and fight for that superior principle. I start thinking of those who stood for big causes, such as Gandhi and Mandela.

They were not different. They were humans and stood for something big. At this moment, I decide to be strong and fight for this principle which I truly believe in. I know that it won’t be an easy fight and I find myself having to take a long breath.

Here, I realise that the human mind is magnificent. It can lead you to craziness or peace. I decide to live day after day and night after night. I don’t have to think of the next hour or the next day. I should live the moment and control my mind.

I know that I will have down times and I have to live with it. I know that I may stay in prison for years, but deep in my heart and mind, I know that good always wins.

I start to look after Wilson, making sure I change his water every day.

I start exercising in the cell, one hour in the morning and one hour at night. I start listening to the testimonies of Muslim Brotherhood officials and talk to them through the doors. I feel that I’m in this prison with them for a reason. I should listen to what they say and write about it someday. Their testimonies are very important and they were in power during one of Egypt’s most crucial times.

On February 14, I am transferred to a better prison. I believe my colleagues and I have been moved to this prison for two reasons.

First, a huge campaign was launched to release us. Second, nationalities. My colleagues Peter Greste and Mohamed Fahmy are from Australia and Canada respectively. What I mean is they were foreigners and not Egyptians. That is also the reason I was released from prison: I was in a group with foreigners.

Despite the love I have for Peter and Mohamed, it really hurts that my country treats its citizens worse than foreigners, that my country, Egypt, deals with foreigners better than Egyptians.

I recall two incidents here. The first, when Peter was released. The warden didn’t tell me Peter was being deported. When I found out later, I went to thank him – he cared for my feelings and didn’t tell me. He became very angry. He said: “If I was doing a police operation with foreign officers and something wrong happens, are they going to give up on me?”

The second was more recent, after my own release, when an Italian PhD student, Giulio Regeni, was kidnapped, tortured and killed by security forces.

The Italian media said something true and tough: “He was killed as if he was Egyptian.”
If anyone is Egyptian, half Egyptian or a dual citizen, he or she is likely to be thrown in prison for a very long time, possibly for good.

Two living examples include Ibrahim Halawa, a young Irishman of Egyptian parentage who was arrested more than three years ago when he was just 17, and Aya Hegazy, a young Egyptian American who was in jail for almost three years for helping street children.

Imagine, then, how hard it is for those who with only Egyptian citizenship. Imagine how hard seeking justice will be for Al Jazeera journalist Mahmoud Hussein, and the tens of other reporters in Egyptian prisons.

It is really killing me. I have a huge amount of guilt that I’m not doing anything for journalists behind bars. Unfortunately, there is not enough campaigning going on for those who are in jail in Egypt. I wish I could do more than writing about them, but I don’t know where to start.

If I could send a letter to those in jail, I would say…

You are not forgotten. You are always on people’s minds. I’m sorry that there is not enough campaigning for you. I promise you that I’ll do my best to cover your stories. Your steadfastness is inspiring me and the world.
I keep tell my children about each single one of you.

Ibrahim, my son, wants to be like you. He wants to protect his sisters like you did.

Shawkan, my daughter, wants to become a photojournalist.

And Aya, congratulations to you and your husband on being acquitted – may this be a sign of things to come. My daughter wants to help poor children like you have.

I don’t know if this is right or wrong, but my children hate the police because of what has been happening to you and me.

Every one of you should be proud. Be sure that good will win and I won’t allow you to give in. 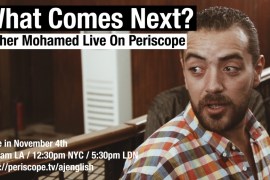 Freed by presidential pardon in September, Baher Mohamed will be answering your questions. 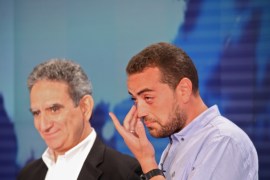