Azad Nagar, Pakistan – The car made its way down the narrow, winding, mostly unpaved road towards Azad Nagar – a settlement on the outskirts of the southern Pakistani city of Hyderabad that is inhabited by freed bonded labourers.

Inside was Veeru Kohli, a former bonded agricultural labourer who is now an activist working for the eradication of this form of slavery.

Almost 45.8 million people are trapped in bonded labour across the world and Pakistan is home to more than two million of them, according to the Global Slavery Index.

Kohli is a familiar face in Azad Nagar, which means land of the free. More than 100 families currently live here in thatched roof houses that lack electricity and running water. A small temple serves as a place of worship for the mostly Hindu residents.

Kohli does not know her age but appears to be around 50 years old. She is wearing a bright pink ghagra and choli – skirt and blouse – with a black shawl draped over her shoulders and a vermilion on her forehead, a practice followed by Hindu women.

She vividly recalls how the contractor at the farm in Umerkot, around 150km from here, where she worked as a bonded labour would beat up her children.

“Life was hell back then,” she says. “We worked for a feudal lord and never got to see any sort of payment for all our efforts.”

“There was no accountability, sometimes my children used to eat, other times there was no food. We would get random vegetables from the jungle and eat them raw,” she explains as she sits on a charpai, or cot, surrounded by other women.

The business of slavery

Bonded labour was outlawed in Pakistan in 1992, but it is still widespread in brick kilns, as well as in the agriculture, mining and fishing sectors.

The bonded labourers become trapped after taking out a small loan – often to pay for medical care or a wedding. As the loan accrues interest – often at exorbitant rates – they are unable to pay it back and future generations of their family remain enslaved.

“I started working when I had two kids,” Kohli says, although she doesn’t remember which year that was or how old she was. “We were desperate for money. My children worked with me, cutting grass and picking up cow dung.

“Altogether we were eight families, around 45 people, enslaved by that feudal lord for over two years. In addition to beating up my children, he didn’t let me marry off my girls. He didn’t let us leave despite repeated requests.”

Members of religious minorities, underprivileged castes and poor Muslims are especially vulnerable to the system of bonded labour.

“If those feudal lords liked someone’s girl, they would summon them and convert them to Islam. How can you change someone’s religion like that? But this is what happened there. It’s not right but it happened openly,” Kohli says, struggling to contain her emotions.

After being enslaved for two years, Kohli finally fled in 1998. She didn’t use the bus for fear of being caught – as had happened to some before her – but instead, walked barefoot through the jungle.

She walked for two days, her feet bleeding from the thorns that had become embedded in them, before reaching her brother’s home about 50km from there.

With his support and the involvement of the police, she then returned to the feudal lord who had enslaved her to demand that he free the rest of her family.

But, Kohli explains: “After being freed, I realised the real struggle had only just started. My aim was to free as many bonded labourers as I could because, having gone through what they do, I feel the pain and the suffering.”

“Unfortunately, those in power are either part of it or turn a blind eye, refusing to accept bonded labour exists in Pakistan,” she adds.

Kohli has travelled across Pakistan as part of her campaigning work, for which she was honoured with the Frederick Douglass Freedom Award, named after the African-American former slave and abolitionist and given by the NGO Free the Slaves, in 2009. She was also invited to speak on the issue in neighbouring India.

With the belief that boardroom talks and lectures have limited impact, she decided to enter politics.

“We beg these politicians for small things but never hear back. I hoped to win a seat in the Assembly [Sindh Province] and work for the poor,” she says.

“I got death threats and was also offered bribes following that decision, but I stood firm.”

She failed to win a seat in the 2013 Assembly but her courage in taking on the then ruling Pakistan Peoples Party (PPP) in a region where it is well-established inspired many of those looking for a political alternative.

Then last December, she decided to challenge Bilawal Bhutto-Zardari, the son of the assassinated former prime minister, Benazir Bhutto, in the PPP stronghold of Larkana, in Sindh, about 300km north of Azad Nagar.

Larkana has in the past elected Benazir Bhutto to the National Assembly. It is also the birthplace of the party’s founder Zulfiqar Ali Bhutto, Benazir’s father.

The elections are yet to be held but before Kohli’s election campaign could pick up momentum, she decided to withdraw her name.

Limited funding and resources are the main reasons she cites for pulling out of the race.

“I really wanted to stand up against Bilawal and show him that ordinary people have a voice too, but it’s unfortunate that fighting against the influential requires a lot of resources,” she says.

“Larkana is in a big mess right now. We could’ve worked to improve the condition of the city. But we’re poor, we’re labourers and barely have enough to eat. We couldn’t carry out the plan we had.”

A hero for other women

In Azad Nagar, women come out of their houses to greet Kohli as she walks past. They tell her how much better their lives are now that they are no longer bonded labourers.

The settlement was built with help from a local NGO Green Rural Development Organization (GRDO) and Action Aid in 2006.

With space for 310 families over 4.5 hectares of land, Azad Nagar was planned as a place where freed bonded labourers would live temporarily as they began their new lives. But it has become a permanent home for many of its residents.

“We started with two or three families, we thought they could come here, stay for a bit and then move on to where they would find work,” says Ghulam Haider, one of the founding members of GRDO.

“Some families arrive and stay for longer, some even become a permanent fixture. We don’t force them to leave. They have found work here on the fields or in the nearby towns. They are happy here and more importantly, they live a free life.”

In the middle of the settlement, a small school now lies unused. Of the 150 or so children who live here, only 16 go to school. They attend one that is about 1km away. The other children play in the fields or help their parents with chores.

As we enter the closed school, some children are quickly ushered in to recite the alphabet in English. They smile as they jump from chair to chair.

“This life is so much better for us. We work on the brick kilns next door and are able to earn some money,” say Soomri, who gave just one name. “Earlier, we were kept in bondage literally. My three sons were chained up. The two years we spent there were hell,” she adds.

Her face is wrinkled and her hands rough from the work she was made to do as a bonded labourer. On one of her fingers is a wedding ring.

“After we fled, they kidnapped my husband who was later beaten to death,” she says. “They wouldn’t even let us bury his body.”

Such stories are not uncommon here. But still the women laugh and talk animatedly about what has happened in the settlement since Kohli last visited.

But Kohli cannot stay long. She is on a mission to free some other bonded labourers. So she walks towards the car, stopping at one house to enquire about the wellbeing of those who live there.

“These people are like family to each other,” she says. “They share a past full of struggle. But if we stay together, we can form a better future.”

Kohli might have withdrawn from the election race but she continues to inspire others to fight for their rights and for a brighter future.

“I tell them to earn an honest living and send their kids to school. There is no fear any more,” she reflects. 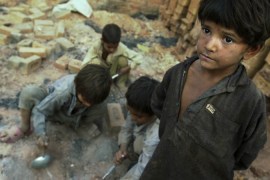 From: Slavery: A 21st Century Evil

It is a form of slavery that is passed down from one generation to the next, enslaving millions.