Istanbul, Turkey – Vehicles of rival campaigns wander the streets of Istanbul as they blast their propaganda songs calling on Turkey’s citizens to vote on their side in the upcoming referendum on April 16.

Only days left to the key vote, “Yes” and “No” camps campaign at full speed in the 15 million megalopolis in a last ditch effort to convince Turks before they vote to accept or reject the proposed constitutional changes that might deeply change how Turkey is governed.

The proposed constitutional amendments seek to transform Turkey’s political system into an executive presidential one, significantly empowering the top office, while abolishing the prime ministry, which holds the main executive power in the current system as the head of the cabinet.

The “Yes” camp seeks support for what they say is a “more stable” and “secure” Turkey under a new system. The “No” camp believes the changes will lead to a “one-man rule” that will undermine Turkey’s democratic institutions and lead to arbitrary governance.

The constitutional changes are backed by Turkish President Recep Tayyip Erdogan, the ruling Justice and Development Party (AK Party) he founded and the far-right Nationalist Action Party (MHP), whose support at parliament was key to take the proposal to a public vote.

The MHP has been going through an internal fragmentation since their leadership decided to back the proposed constitutional amendments. Various senior MPs, who entered the parliament under the party’s banner, campaign for “No”.

The AK Party carries the whole “Yes” campaign, with very limited and separate appearances from the MHP, the smallest of the four parties represented in the parliament.

The two parties argue the new system will prevent a return to fragile parliamentary coalitions at a time when the country is facing challenges such as multiple security concerns, an influx of refugees from Syria and the fallout from a failed coup, which led to an ongoing state of emergency across the country.

Erdogan said at a recent rally that Turkey’s current system has created many short-lived governments, adding that government changes have histrorically been far more frequent in Turkey than Western countries.

“The fact that we had 48 governments is not the expression of the strength of our democracy, but the instability of it.” “The governing system’s codes are stability and security,” he said in another rally, adding that Turkey paid a great price in the past due to lack of both.

During the past few years, deadly bomb attacks claimed by or blamed on Kurdish fighters groups and the Islamic State of Iraq and the Levant (ISIL, also known as ISIS) killed hundreds of security forces and civilians. Security concerns were further emphasised when some members of the Turkish army dramatically tried to topple the government last July in a failed coup until they faced strong resistance from the populace and the rest of the army.

Turkey accuses Fethullah Gulen, a religious leader who lives in self-imposed exile in the United States, of orchestrating the coup attempt that killed around 300 people in total and led to purges within state institutions. The government says the purges aim at removing Gulen’s supporters from the institutions.

Many “Yes” voters express their confidence in Erdogan and say the need for economic and political stability is the reason for the direction of their vote. “I have seen Turkey’s most volatile times during my lifetime: economic downturns, coups and lousy coalitions,” said Fatma Aksoz, a “Yes” supporter, in the district of Eminonu.

“We have had a stable government for 15 years now. What if we stay in the current system and in years ahead, we have to deal with another coalition government and instability?” the 57-year-old pensioner told Al Jazeera.

Among the backers of the constitutional changes, there also seems to be a strong and growing negative sentiment against the European Union (EU) and the pro-Kurdish People’s Democracy Party (HDP).

Eighteen-year-old student Enes Arslan told Al Jazeera: “Terrorists (Kurdish separatists), the party that supports them (HDP) and the EU are Turkey’s foes and they are against the presidential system. That’s enough reason to vote for the changes.”

The opposition People’s Democracy Party (HDP), which is for “No” in the upcoming vote, has been hit by a series of arrests of its officials, including MPs and coleaders. The government blames the HDP, which is the third largest party in parliament, of having links to the outlawed armed Kurdistan Workers’ Party (PKK), which is viewed as a “terrorist” group by the EU and US.

And recently tensions have been high between the EU and Turkey. Turkish officials have been engaged in a war of words with Germany and the Netherlands since last month after the two EU member states barred Turkish ministers from speaking at referendum campaign gatherings within their borders.

There are millions of Turks living in Europe, mainly in Germany, France and the Netherlands, who might end up determining the outcome of the referendum.

‘No’ camp against ‘one-man rule’

“No” campaign, mainly carried out by the main opposition centre-left Republican People’s Party (CHP), argues that the proposed changes will degrade separation of powers and governmental checks and balances in Turkey by giving one individual too much power.

The supporters of the CHP play anthems and promo songs across Istanbul referring to Mustafa Kemal Ataturk, the founding father of modern Turkey, as they wave national flags and hand out leaflets calling for rejection of what they say will be the end of democracy in the country.

“Power, without any checks, would be disastrous. Democracy’s existential goal is not to leave power unchecked,” CHP leader Kemal Kilicdaroglu recently said at a rally.

The HDP, which has been hit by mass arrests, is running a much smaller campaign.

“Every word of the president is perceived as a rule in the current climate. They are trying to take the nation hostage by formally taking this [climate] into law through the referendum,” Ahmet Turk, a senior HDP MP, said.

Both CHP and HDP officials and supporters say that the AK Party and the presidency use state resources at its disposal for campaigning purposes and Turkey’s media outlets cover the “No” campaign far less than the opponent one. “We are going to this referendum in unequal conditions. They use the state’s planes, vehicles, money and television channels,” said Kilicdaroglu.

‘No’ voters worry about future

Many of the “No” voters worry about their future under the new system as they are not sure how their lives will be affected. “A president with such powers might make further arbitrary changes in Turkish laws at every level that will immensely affect our daily lives,” 59-year-old pensioner Cevdet Ersal told Al Jazeera, adding that the changes will create “a monarchy”.

Hilal Mert, a 19-year-old student, said: “I want to live in a country where different institutions can monitor each other through a separation of powers. Who will stand for my rights if there is nobody to monitor the one holding the power?”

Turkish presidency traditionally used to be a neutral and largely ceremonial role without any political responsibility in line with the current constitution.

However, Erdogan has effectively transformed the office to a more politically active one after he became Turkey’s first president to be elected by popular vote in 2014 – in line with a set of prior constitutional changes passed in a similar referendum in 2010.

Before taking over the presidential office, Erdogan served three terms as prime minister since 2002, when his party secured a landslide victory in the first elections it entered at a time the country was suffering from political instability and a major economic downturn. 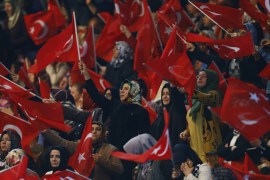 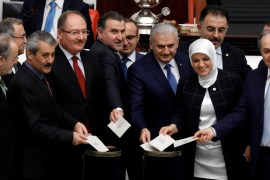 Turkey’s constitutional reform: All you need to know

Supporters say the constitutional reform will bring stability, but critics believe it may ‘lead to a one-man rule’.