Lahore, Pakistan – Exhausted from a full day’s work, 25-year-old student Sohail Yafat knew he had one last stop to make before heading home: a visit to a colleague’s ailing father at the Punjab Institute of Cardiology hospital, in his native Lahore, Pakistan’s second city.

Yafat never expected the police to be there, waiting for him. He was arrested, and bundled into a police van.

“There was no warrant. This was all purely on suspicion,” he says. “I was blindfolded, and I was brutally tortured and beaten on the way. I had never even entered a police station, so I had no idea of this world.”

That was the summer of 2001. The police and a complainant had named him as an accomplice in a murder case in the town of Sahiwal, about 150km south. What followed for Yafat was harrowing: 10 years of imprisonment during which he was tried, convicted and sentenced to life imprisonment. In 2011, a court exonerated him, acquitting him of his crimes for want of evidence.

“I was subjected to third-degree torture. They beat the soles of my feet with bamboo sticks. I was beaten with whips. I was kept awake, bound so that I was positioned bolt upright and unable to sleep,” he recalls.

The maximum punishment for murder suspects in Pakistan is the death penalty – Yafat says he was terrified of receiving it. In the 10 years he spent in prison, having seen the conditions under which death row prisoners lived, he was determined to work for their rights, “to ease their pain”, he says.

In 2014, the government lifted a six-year moratorium on executions as part of a counter-terrorism plan. It then expanded the use of executions to include non-terrorism offences in 2015, saying the measure was needed to combat crime.

Last year, Pakistan executed 87 people, making it the fifth most prolific executioner in the world, according to an annual report on the global use of the death penalty released by Amnesty International on Tuesday.

Together, Iran, Saudi Arabia, Iraq and Pakistan accounted for 87 percent of all recorded worldwide executions, the report said. China is widely believed to execute thousands of people every year, but data on executions “is classified as a state secret”, according to Amnesty.

In total, 1,032 executions were recorded in 2016, down by 37 percent, but death sentences were at the highest level since Amnesty began compiling statistics, with 3,117 people sentenced to death worldwide.

Of those, more than 360 people were sentenced in Pakistan, and are currently living on the world’s largest recorded death row, home to more than 6,000 prisoners.

Pakistan’s Interior Ministry had not responded to a request for comment by the time of publication.

INFO-GRAPHIC: Death penalty around the world in 2016

Pakistan’s prisons are chronically overcrowded, partly owing to an overloaded justice system that incarcerates a large proportion of under-trial prisoners. As of April 2015, the country’s prisons held at least 80,169 prisoners, against a capacity of just 46,705, according to World Prison Brief.

Within the prisons themselves, special areas are designated for death row prisoners. As many as eight prisoners will be forced to share an eight-by-10ft cell, says Yafat, who spent years at the Sahiwal Jail tending to fellow prisoners.

“One death row prisoner had just about one and a half feet of space to himself within which to live,” he recalls. “He has to live, sleep and eat in that space.”

Prisoners are walked by guards for two hours a day, while handcuffed, often carrying their belongings with them as they are cycled between cells.

“You are a human being who has basic needs, but you no longer have any element of choice or freedom,” says Yafat of death row. “You cannot sleep or eat or wake by your own choice. You live like a robot. Every day, you live the same way.”

Rights groups say Pakistan’s justice system disproportionately convicts and sentences those in lower-income groups to death, given their lack of resources to arrange an adequate legal defence.

“Many people had no lawyers, and they were appealing [against their sentences] through the jail,” Yafat explains. “The hearings were ongoing for years – sometimes for more than 10 years, and often cases would be left by the wayside, with no one to take up the case from outside the jail to push for it to be heard. Often their lawyers would not show up for hearings.”

Allegations of torture to obtain confessions and improper investigative work by Pakistan’s police force have been well documented by rights groups and research organisations, although the state denies their use is policy.

Questions also remain about the efficacy of the judicial system. In October, Pakistan’s Supreme Court acquitted two brothers who were on death row for murder, but judges were astonished to find that the men had already been hanged a year earlier.

Moreover, defendants without access to funds “must rely on attorneys who typically provide only cursory and ineffective representation”, says Belal.

In 2003, police officer Khizr Hayat was arrested, tried and convicted for the murder of a man in his neighbourhood. Hayat has been on death row for 14 years, awaiting execution, while his mother has struggled to arrange for an adequate legal defence for him.

Bano had limited access to funds, and was forced to seek the cheapest lawyers she could find. Her son’s defence lawyer, she says, failed to call a single witness at the trial, forcing her, at one point, to appeal to the judge directly during a hearing.

Hayat suffers from paranoid schizophrenia, an illness that was diagnosed while he was incarcerated, but Bano has been unable to obtain the official report to present in court on appeal.

He has no idea he is about to be executed, says Bano.

“He tells me that don’t worry, I have been acquitted. Why are you crying?” she says of an occasion when she went to meet him after his execution orders had been issued. (The execution was later stayed by a court.)
The execution of mentally ill prisoners has been a particular concern, says JPP and UK-based rights group Reprieve. In October, while hearing an appeal against the hanging of a mentally ill prisoner, Pakistan’s Supreme Court decreed that schizophrenia was not a mental illness. Hearings in that case are ongoing.

Yafat has been working as an investigator since his release in 2011, with a particular focus on the cases of death row prisoners who may not have been given an adequate legal defence.

“I’ve been seeing this for 17 years – including the 10 years I was in jail: mostly those who are being executed or are on death row, most of those people just don’t have the resources and cannot afford the expenses of having their appeals heard in the superior courts.

“They would get court-appointed lawyers, who are paid just Rs1,000-Rs1,500 (roughly $10-15) as a stipend per day. So you can imagine what their level of representation, and association with their clients, is,” he says.
Meanwhile, the jails keep filling up. Pakistani law prescribes the death penalty for 27 offences, ranging from murder to kidnapping, rape, adultery, blasphemy, drug trafficking and even sabotaging the country’s railway system.

“I don’t know who killed that man,” she says, protesting Hayat’s innocence. “That only Allah knows.” 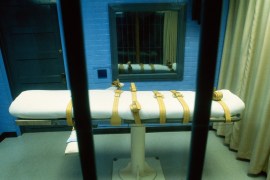 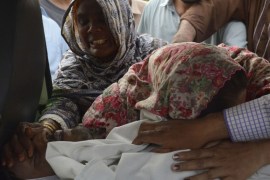