There may not be enough space in camps to accommodate the tens of thousands of internally displaced people (IDP) currently fleeing their homes in western Mosul amid intense fighting in the city, a United Nations official has said.

At least 50,000 people have made their way to the camps on the eastern side of the Tigris River, but the UN warns that if the number rapidly increases, they will be hard pressed to find a place for the new arrivals.

As the US-led Iraqi army offensive to retake the western half of the city from the Islamic State of Iraq and the Levant (ISIL/ISIS) continues to push on, at least 700,000 civilians are still trapped inside, with food and fuel supplies fast dwindling.

Up to 450,000 are expected to make their way to the camps, Lise Grande, humanitarian coordinator for the UN Assistance Mission for Iraq, said.

Grande told Al Jazeera that people “inside western Mosul who are trying to escape are at extreme risk; they are targeted and occasionally shot by ISIL snipers.”

“Fighting is very intense,” she added. “Daesh [ISIL] is fighting for everything right now.”

Supported by the US-led coalition bombing ISIL in Iraq and Syria, Iraqi forces began the operation to retake the western part of Mosul on February 19. West Mosul is the largest remaining urban stronghold in the “caliphate” declared by ISIL in 2014.

East of Mosul has been declared “fully liberated” in January, three months after the operation to retake the entire city was officially launched.

Since November 2016, civilians have had to live with scarce amounts of food and water, while electricity is largely intermittent.

“The main route [towards western Mosul] has been cut off. Smugglers have been bringing in little amount of supplies. Electricity can be off for days, sometimes weeks,” said Grande.

Families attempting to flee usually do so in the middle of the night, said Grande. Still, it is a huge risk, and they often have to “run for their lives”. Civilians in the heart of the city depend solely on themselves to get their families to various gathering points at the frontlines. The Iraqi army usually takes over at the frontlines, transporting civilians to safety.

Civilians are often caught in the crossfire, and the chances of being shot while making the trip are extremely high, according to Grande. Those who miss this opportunity of being transported by the army often end up crossing the desert on foot before reaching one of the camps on the eastern side.

The World Health Organization has set up multiple trauma stabilising points (TSP), as close to the frontlines as possible, Grande told Al Jazeera. There, wounded civilians are given emergency care before being transporting to the nearest hospital.

“What is striking about this crisis is that half of the casualties are civilians,” said Grande.”TSP areas have had to dramatically expand. We were not expecting this amount of casualties.”

Out of the entire IDP population at the refugee camps, 56 percent are children under 18.

Field workers, she said, are “working around the clock” to construct additional emergency tents as quickly as possible.

Speaking to Al Jazeera, a newly reunited family said fleeing to safety on the eastern side has been fraught with difficulty.

“It was extremely difficult to leave. It was so dangerous that my eldest daughter, Aya, insisted to accompany me to ensure I crossed over safely,” Shukri said. He added that he had been a target for ISIL fighters who believed he would leak “valuable” information to the Iraqi army.

“I would talk to my family every now and then. They were constantly being watched by ISIL, and couldn’t phone me as much as I hoped they would,” he said. Asked how the family was being watched, Shukri explained that ISIL fighters would reside inside family homes.

“They smashed concrete walls, creating tunnels to connect each house to the next,” Marwa Hassan, Shukri’s wife, told Al Jazeera by phone. “They wanted to hide from Iraqi forces. They would cross entire neighbourhoods walking through the insides of buildings, instead of being exposed in the streets.

“We saw dark days. The kids wanted their father, and it was so difficult being mother and father at the same time,” she said. “I had to stop sending my kids to school.”

The US-led coalition retook Mosul International Airport, located in the south, when the offensive on the western side of the city started. Since, they have claimed gains of main government offices and a Mosul museum in their latest series of assaults against ISIL group fighters.

Hassan told Al Jazeera that they had to leave their home, which was destroyed owing to army shelling attacks targeting ISIL fighters. “My mother was injured, my brother carried her as we, along with my three other children, walked to reach liberated al-Mansour district,” she said, before being assisted by army personnel to leave for the eastern side.

The family’s journey to reunite with Shukri took nine hours. “We’re truly in disbelief. We can’t sleep because of the excitement of being fully liberated,” Hassan said. 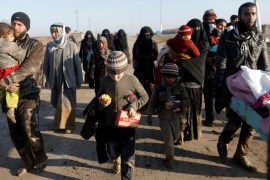 Number of displaced swollen by 45,000 who have fled city’s west since push to seize it from ISIL began, says NGO.