I last worked in Somalia six years ago, when famine also loomed, and there were countless stories to tell about starvation, a health crisis and devastation.

Knowing it is little different this time round is heartbreaking. A drought that appears to be worsening has left more than 6.2 million people without enough food, if any at all.

Last week, the World Health Organization (WHO) warned that Somalia was at risk of its third famine in 25 years. The last one, in 2011, killed almost 260,000 people.

We arrive in Doolow where the intense heat smothers us from the moment we step off the United Nations humanitarian aid flight we’ve arrived on. Our first stop is a transit camp where internally displaced people stream in, some looking for help for a few days, others resting on their way to Ethiopia.

The Ethiopian border is across a bridge at the edge of this little town. Dozens of people congregate almost daily waiting for word they can cross.

It is up to Ethiopian authorities to decide if that will happen and people can make their way to a nearby refugee camp. There is some comfort for many who arrive in this town, knowing they are at least a little safer from al-Shabab fighters and clan wars.

About 250km southeast in Baidoa, where we travel next, the atmosphere is different. There is a significant African Union military presence. It’s needed to keep the town safe from al-Shabab who have almost free reign just outside. In the camps, people complain about not receiving any aid.

The people we spoke to had walked or ridden on donkey carts for hundreds of kilometres to makeshift camps in the town. Some were farmers who had lost all their goats and cattle to the drought. They have had at least three failed harvests and, without this livestock, they have nothing. They are now living in tents pulled together with plastic sheeting and whatever material they can find.

The sense of community is clear as people club together to do what they can to help their neighbour.

People constantly group around us watching what we are doing, out of curiosity and boredom. These camps are cramped, there is little to do, people are hungry and waiting for any relief.

Watching our team filming gives them something to busy themselves with, even if for just half an hour. Our time at the camp is limited, we have to move fast because of security concerns. We travel everywhere in this town with a security escort.

A nearby hospital is inundated with patients, suffering from either malnutrition, cholera or acute diarrhoea. Young children seem to be affected the worst. We see mothers bringing in babies who have been vomiting for days, contaminated water being the likely cause.

In Mogadishu, where we travel next, we find a city trying to get on its feet. It is where thousands of people who need healthcare are coming because they can’t get any aid in some outlying areas.

There are still regions where aid agencies can’t reach because it is not safe.

Aside from the security threat, the number of people these aid agencies have to help is enormous. The UN children’s fund, UNICEF, says the number of malnourished children could double by the end of the year. Already 185,000 need life-saving support.

It’s difficult to see how the situation in Somalia can improve quickly enough to avert famine.

It’s worrying to think that as journalists we may return in the coming months to tell the stories of people who won’t make it through this drought. 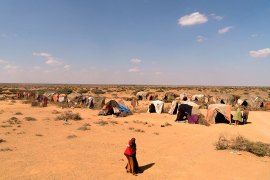 Fighting to survive hunger in Somalia

The lives of 6.2 million people are now at risk in the country because of drought as the war with al-Shabab rages on. 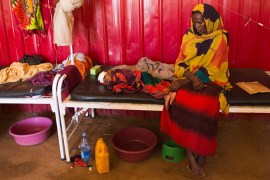