By
Shatha Hammad and
Zena Tahhan

Ramallah, Occupied West Bank – The curtain on the window from which Basil al-Araj, 34, would look out onto Ramallah is slightly drawn back. Water bottles line the edge of the window, in an old house in the city where he went into hiding more than two months ago.

Cigarette butts are scattered on the table, next to a set of books that Basil spent his time reading. A cup of coffee still sits next to the last meal he consumed, including some beans. Dried blood stains the floor of the house.

At 2am on the morning of March 6, the sound of gunfire reverberated through the streets of Ramallah, before the Israeli army announced they had killed the man they had been hunting for months.

Basil, a well-respected figure by Palestinians across the spectrum, was known for his activism and resistance to the ongoing Israeli occupation. He led a youth movement against what he believed were the dangers of normalisation with Israel, and simultaneously organised protests in Ramallah, the headquarters of the Palestinian Authority (PA), a semi-governmental body ruling the West Bank, calling for national elections.

Basil's death is a loss to all of Palestine, but his legacy will guide us through the struggle.

Palestinian security forces arrested Basil and several of his friends in April 2016, near the village of Arura, north of Ramallah, claiming that the young men had unlicensed weapons and were attempting to carry out an attack on Israeli targets.

Shortly after the men were arrested, Mahmoud Abbas, president of the PA, spoke proudly of his government’s coordination with Israel in arresting the young men.

“Our security forces are working very efficiently to prevent terror. Just a couple of days ago, three young men were tracked down and arrested. They were planning an attack. In this context, our security cooperation with Israel is functioning well,” Abbas told the German news outlet, Der Spiegel.

Subject to torture and ill-treatment in prison, the young men went on a hunger strike for nine days, spurring a popular movement to press for their release. After his release in September, Basil went into hiding and had been wanted by Israel ever since.

Muhannad Karrajeh, Basil’s lawyer while he was imprisoned, told Al Jazeera that the six men had lived through extremely difficult times in PA prisons, chained by their arms, being beaten and tortured.

Karrajeh said that they were detained for six months under the pretext of “legal procedures”, but that prosecutors were not serious about the investigation.

After Basil’s release, he took refuge in a rented house in Ramallah. The owner of the house said that Basil told her he was a Swedish expat and spoke in English. “He never left the house and would serve me coffee every time I came to collect the rent,” she told Al Jazeera.

His family’s house back in al-Walaja, near the city of Bethlehem, was raided by the Israeli army countless times, as they embarked on a manhunt.

Whether the Israeli army coordinated with the PA on Basil’s whereabouts remains unknown, but many within the Palestinian community have placed blame on the PA, criticising the policy of security coordination.

Basil’s uncle, Khalid al-Araj, said that the arrest of Basil and his five friends on the basis of trying to resist the occupation suggests that there was coordination between the two sides.

Upon hearing of her son’s killing, Basil’s mother had an emotional breakdown, said Khalid, adding that she tried to stay strong, crying silently. “The family is staying patient and persevering; they believe in Basil and the path that he chose,” Khalid told Al Jazeera.

The Israeli army alleged that they had found arms in the house where Basil was hiding, releasing photos online. An Israeli police spokesperson said Basil was “the head of a cell planning attacks against Israeli targets”.

Dozens of Basil’s friends and family members have subsequently visited the house where Basil barricaded himself before he was killed. They marched in the streets of Ramallah on Monday with tears on their faces, carrying pictures of Basil and calling him the “martyr of security coordination”.

The leftist Popular Front for the Liberation of Palestine political party described security coordination as a betrayal of the principles of Palestinian resistance. “We have lost Basil as a human, but his values and ideas will remain with us,” Hamza Aqrabawi, a close friend of Basil, told Al Jazeera. “Basil’s death is a loss to all of Palestine , but his legacy will guide us through the struggle.”

Aqrabawi noted that Basil was particularly interested in collecting oral histories. “We knew Basil as the educated person who believed in the cause of his people and homeland. We knew him as a researcher who dug deep through our history and our struggle,” he said.

“Basil was a beacon for the youth, and he left a mark on all those working to collect Palestinian history. He believed in a certain path and he sacrificed his own blood for it.”

Basil, who studied pharmaceutical science in Egypt, also lectured on resistance and gave political tours on the Palestinian history of dispossession. He was known for the protests he led in his hometown, near the illegal Israeli settlement of Gilo, where Israel’s separation wall has eaten up a portion of his family’s land.

He was one of three million other Palestinians in the occupied West Bank who require difficult-to-obtain Israeli permits to enter Jerusalem, but, according to his friends, he decided to defy Israel’s occupation.

“In 2010, Basil boarded a bus filled with settlers and managed to enter Jerusalem,” a friend who spoke on condition of anonymity told Al Jazeera. “Basil said, ‘Jerusalem is my city, and it is my right to enter it.'”

In a final letter that Basil left inside the house, the young man wrote: “Greetings of Arab nationalism, homeland, and liberation […] Now, I am walking to my fated death satisfied that I have found my answers. Is there anything more clear than a martyr’s deed?” 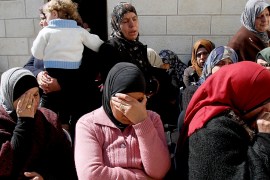