Gaziantep, Turkey – It is not often that you look at a video from Syria and see people smiling or, better still, hear them laughing.

Usually, you see devastated neighbourhoods and hear the sounds of gunfire and people wailing.

It is easy to be left feeling depressed by the misery that almost six years of war has inflicted upon Syrians.

So, when I looked at the video a stringer provided us from a village near Azaz, in northwestern Syria, I could not stop smiling.

Four months ago, fighters from the opposition Free Syrian Army drove the Islamic State of Iraq and the Levant (ISIL) group out of the village. Since then, life has returned to a kind of normal.

Cheerful children play on a water tank on top of a partially destroyed building, people shop in the markets and the Sham School for Orphans has reopened.

On a bare concrete courtyard, the laughter of unbridled joy as you hear children racing to play football or skip rope and the proud faces of the boys and girls eager to share what they know inside the classrooms, make it easy, for just a few moments, to forget the hell of war that supplanted childhood.

Each one of the 221 students has lost at least one parent. Some of the students recently arrived at the village after being evacuated from Aleppo.

Ten-year-old Abdul Rahman Mohamed says: “We were scared. The shelling, the tanks. At night, they were heavily shelling us when we were sleeping.

All the orphans have been out of school for months.

“One of the shells hit our home and destroyed half of it. My father and brother were killed. They were in the kitchen when the bomb hit the house and the shrapnel killed them.”

Although I could not find statistics regarding the situation inside Syria, the UN has warned of a “lost generation” for Syrian refugees now living in camps in Turkey, Lebanon and Jordan where access to education is limited.

Mohamed says: “I want to be a doctor and treat children. We won’t forget the blood of the children.”

Although the village is far enough from the front lines and children are excited about learning inside the classrooms, it is clear that the war is never far from their minds.

Ten-year-old Khalid Mohamed Misto was also evacuated from Aleppo. He could not stop talking about how he never got to say goodbye to his father, who was killed shortly before they left the besieged city.

“I will take my father’s revenge. Assad stole our childhood,” Misto says. “I wish that I could go home to Aleppo. They took our Aleppo.”

The students have been forced to fast-forward through their childhoods. School has become a luxury for some.

Ahmed Hayani, the school administrator, says: “We have many cases where these kids feel responsible for their family’s finances, since they are the eldest.”

“So, money is an issue. We’re trying to take that responsibility away from them and give them their childhood back, so they’re not thinking about such difficult things,” Hayani added.

Bread is distributed by the school for the children to take home to help ease the financial burden. The village council is trying to obtain money from international AID organisations to repair the school, pay staff and one day, build a home for orphans.

“We are trying to bring the children back to school and make them feel special. In the future, we will be teaching them how to use computers and a trade skill so they can get a job,” says Hayani.

The school is also hoping to recruit women, not only to teach but to become a kind of mother figure.

These children do not just need to learn, they need a lot of love after experiencing the loss of a parent and years of war. 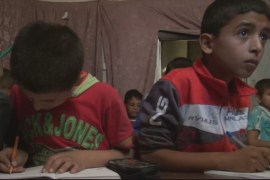 Pupils forced to hide in cellars to study as government and Russian air strikes rain down on besieged city.