Donald Trump’s presidency has been clouded by allegations that Russia sought to help him win the 2016 election while connections between his associates and Moscow also are under scrutiny.

US intelligence agencies have stated unequivocally that Russian hackers meddled in the election. Whether that meddling helped Trump win the presidency is still unclear.

Russia and the White House have denied any wrongdoing.

To help you avoid getting lost in the latest twists and turns, here is an overview of some key developments.

1. There are three separate investigations taking place: an FBI investigation, a Senate investigation and a House of Representatives investigation. The most important is the FBI’s probe into Russian involvement in the 2016 US presidential election which includes, as Director James Comey recently confirmed on Capitol Hill, looking into possible ties between the Trump campaign and the Russian government.

2. The Senate Intelligence Committee and the White House have confirmed that Jared Kushner, who serves as a senior adviser to Trump, will testify. The date has not been announced yet. This is important because Kushner is the commander-in-chief’s son-in-law and the closest so far to the president himself testifying. Kushner served as the Trump campaign’s representative to foreign governments and met with Sergey Gorkov, the head of a state-owned Russian bank, as well as the Russian ambassador to the US, Sergey Kislyak. Gorkov has close ties to Russian President Vladimir Putin and is a graduate of the Russian intelligence service.

3. All three Russia investigations have become entangled in discussions around unproven accusations by Trump that he was wiretapped by former president Barack Obama. In the early morning hours of March 4, Trump tweeted that he had information Obama wiretapped his Trump Tower phones in New York City. The heads of the FBI, the National Security Agency and the former director of National Intelligence have all said there’s no proof that happened. The reason this has come up during the Russia investigations is because there has been speculation intelligence agencies may have collected information on Trump associates and campaign officials while investigating overall Russian meddling in the election. This is what is referred to as “incidental collection”.

4. The House investigation has been tainted in recent days because of a decision by its chairman, Republican Congressman Devin Nunes, to rush over to the White House on March 22 and brief administration officials on classified information that Trump and his advisers may have been swept up in surveillance of foreign nationals by the previous administration. He did not inform Democrats on the committee before speaking to White House officials, leading his colleagues to call for his recusal from the investigation. It’s not clear where the source of the information came from. Nunes has, so far, refused to step down. Nunes served on the Trump transition team.

5. A lot of names have come up in the investigation but there have been two Trump administration officials who have faced direct consequences of their association with Russia. In February, General Michael Flynn, Trump’s national security adviser, resigned following revelations he spoke with Ambassador Kislyak during the transition to the White House. Reports have indicated Flynn may have been warning Kislyak about potential sanctions against Russia by the Obama administration. Attorney General Jeff Sessions has also recused himself from any Russian investigation after he failed to inform Congress he also had meetings and conversations with Kislyak while serving as an adviser to the Trump campaign. 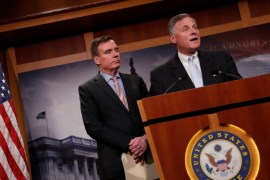 US Senate committee to question 20 in Russia probe

Republican chairman and top Democrat pledge to stay clear of politics in probe of Russian interference in election.