Khitam Ismail didn’t like it when Islamic State of Iraq and the Levant (ISIL) came to town.

She felt scared when the men with their big beards and dark clothes walked towards her on the street. She wondered what she did wrong. And she felt relieved as they walked past.

She remembers when her face veil slipped in the street and the crack across her back came as one of the women from ISIL issued an immediate punishment.

She covered up and raced home.

Khitam heard the talk of the coming assault on her hometown of Raqqa. Since ISIL, also known as ISIS, made it the de facto capital of its so-called caliphate, she thought it would only be a matter of time before a big battle was fought there. She wondered if she would be safe.

Then she was told ISIL would be coming soon to recruit her teenage son, and that fighters were taking the prettiest girls and forcing them into marriage.

As the mother of young daughters, this was a step too far. She borrowed some money, packed up what she could, and decided to leave town.

For 10 days, she zigzagged the country, stopping in safe places, catching lifts where she could, walking until the young children could walk no more.

READ MORE – Six years on: The price of saying ‘no’ to Assad

And then with the snow-capped hills, which mark the border between Syria and Lebanon, in the rear-view mirror, Khitam, her husband and her children crossed the border and made for the Debo Refugee camp.

There they were given shelter. They call it a tent in the camp, but it’s little more than discarded vinyl posters nailed to some wood. The first night, there was nothing on the floor, so they all slept in the dirt, huddled together for some warmth.

Three weeks later, things aren’t much better. They found some plastic to throw on the ground. At least it keeps the snakes and scorpions out. The rats still find a way in. They have some blankets. Some were donated. Others in the camp gave what they could from the little they had for the family who had nothing.

Khitam cries every day remembering what she left behind. “I’ve been married for the past 25 years,” she tells me as we huddle in her shelter, the raindrops falling from holes in the roof.

“Everything I bought and owned is now gone. I had everything in my house in Raqqa. Everything you can imagine, now I have nothing. We barely have blankets to cover ourselves with the freezing nights.”

Last night, in the camp in the Bekaa Valley, the temperatures dropped below freezing. It brings a bone-aching chill that is hard to shake off, particularly when there is nowhere to warm up. It’s an extra weight to be carried through the long miserable days.

Khitam borrowed money to make the journey. About $1,500 in total. Not a massive amount, but a fortune to her. She worries about paying it back.

Her 13-year-old son and nine-year-old daughter have found work in the local fields planting seeds for the year ahead. They make $4 a day. She feels guilty to place such a burden on ones so young, but with her own withered hand and a deaf husband who struggles to make himself understood, there is no other option if the family is to survive.

As the UNHCR announced the number of refugees leaving Syria has now topped five million, more arrived in Deba, looking for shelter, looking for peace.

In this small area close to the border there are 170 shelters. It’s thought there are about six people per shelter, and that’s a conservative estimate. That’s more than 1,000 people in this small space, a place where they can shelter, where they are safe, but it’s not a place anyone would call home.

One refugee told me: “People think we had a choice. The choice was die where we were, live with the fear, the shortages, the hunger, or escape and try to find safety. We left behind the lives we knew for this.”

But still almost everyone we spoke to wants to return to Syria. Khitam too.

“I’ll surely go back. There’s nothing as beautiful as one’s country. I’d die for the country that holds all my beautiful memories.”

She just doesn’t know what she will be going back to, or when. 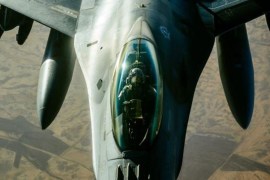