Erbil, Iraq – As Iraqi forces continue their ground war to retake Mosul from the Islamic State of Iraq and the Levant (ISIL, also known as ISIS) group, the US-led anti-ISIL coalition air forces backing them appear to be killing significant numbers of Iraqi civilians in the process.

Many local residents are speaking out publicly about homes destroyed and family members killed by air strikes that have relied on outdated intelligence or poor targeting.

One morning last November, as Iraqi forces battled ISIL fighters on the edges of the eastern Mosul neighbourhood of Hay Zahraa, about three dozen people huddled for safety inside the home of Seif Zaidan Khalaf.

As Khalaf, 20, was on his way home, an air strike hit the house.

“My brother and my cousin died,” Khalaf told Al Jazeera in a recent interview, his face still blank with grief. Square blocks of concrete lay scattered around his feet, fragments of the walls that collapsed in the strike.

He picked up a cloak with a broad hole torn in the middle, which he said was wrapped around his cousin when he died.

The bombs that killed his cousin, 31-year-old Sirhan Sleiman Salih, and his brother, 37-year-old Faris Zaidan Khalaf, were aimed at a fighter with the ISIL group , who had taken up a position on the roof of their house, said Khalaf and his neighbours.

Whether the strike was conducted by the Iraqi forces, or from the US-led anti-ISIL coalition, they don’t know. But the tactic of using air strikes to take out ISIL fighters on roofs is common, according to other air strike victims in Mosul Al Jazeera spoke to, as well as emerging reports.

While no government data is available, the United States had, before the recent Mosul strike in which hundreds may have died, admitted to killing 220 civilians since August 2014. Airwars, an NGO that has been monitoring air strikes against ISIL in Iraq, Syria and Libya, has tracked the numbers of as many as 64 civilians likely killed in February, down from as many as 227 killed in January and hundreds reported killed in just the first half of March.

Khalaf recalled a terrifying scene on the morning of the strike on his home.

“Everything crashed down upon us,” he said. “The neighbourhood came around and pulled us out [from the rubble]. We went in a car to the hospital and ISIL wouldn’t let us in. They said, ‘You go sit at home, and wait for the apostates to come to you.’ We even had a wounded ISIL fighter with us.”

Walid Husain Ahmed, a 29-year-old volunteer with a local NGO that helps air strike survivors, said the victims of the strike each had seven children. In a house where some of the survivors have since sought shelter, many of the children, most younger than 10, milled around one of the rooms, occasionally squeezing through a half-open door to deliver cups of sugary tea to the adults.

Khalaf and his family, who left Mosul after ISIL’s takeover in the summer of 2014, took refuge in the northern al-Sheikhan district, a largely Yazidi and Assyrian area under Kurdish Peshmerga control. But when they heard that ISIL was planning to reappropriate empty houses in Mosul, they returned to reclaim theirs.

In another case, the Khodeida brothers, who are now living in the densely populated slum neighbourhood of Mamzawa on the outer edges of the Kurdish capital of Erbil, are also struggling to recover after coalition air strikes claimed their mother, father and three sisters. The remaining four brothers, aged between 11 and 18, say their home in eastern Mosul was hit in mid-December. They are now living with an uncle.

Today, just a corner of one wall of their home remains, along with the base of a concrete staircase that leads to the open sky. The explosion was so intense that it knocked down their neighbour’s home.

“The airplane was circling above us. It was white,” Marwan Khodeida, 18, told Al Jazeera. “The roof of our house was open. I could see it. I could hear it.”

Muthanna Khodeida, 17, said the whole family was sitting in the house at the time of the strike. “I went out to get some toothpicks. When I got to the shop, I heard the strike. It was powerful. I ran back to the house and found it had been hit. I saw my [little] sister and realised her legs had been blown off.”

Qahtan Khodeida, 11, said the family initially heard a plane striking a target that sounded far from their home. “The second time, it struck us.” Scars from shrapnel wounds are still etched across the young boy’s chest.

Chris Woods, head of the Airwars, said the Mosul operation has been far too chaotic, without sufficient regard for the civilians in the path of bombs.

“Precision simply means your bomb or missile got where it needs to go. [The war] has gotten to a point where 500 to 1,000-pound, sometimes 2,000-pound, bombs are hitting densely populated neighbourhoods,” Woods told Al Jazeera, noting that coalition claims of accuracy do not necessarily mean that strikes have avoided civilian casualties. Coalition leaders have repeatedly stressed the accuracy of their strikes and the extremely low loss of civilian life.

When I got to the shop, I heard the strike. It was powerful. I ran back to the house and found it had been hit.

And while many civilians in Mosul and elsewhere in Iraq have lost their homes and the lives of their family members through air strikes, obtaining compensation has been a struggle.

Some US officials have cited the American Foreign Claims Act, a World War II-era statute that bars the military from compensating for civilians lawfully killed on the battlefield, as a reason why not to compensate victims of strikes. Yet others, such as Sahr Muhammedally, from the Center for Civilians in Conflict, say that legislation passed in 2014 specifically ensures that compensation will continue to be paid to victims of US conflicts.

“As far as we understand, not a cent has been paid by the allies after 30 months of war,” Woods said.

The US has acknowledged the deaths of 220 civilians through its air strikes since August 2014, but the other 12 partners in the anti-ISIL coalition “claim outrageously not to have killed any civilians”, Woods said. Belgium, one of the leading partners, claims zero civilian casualties.

In an interview with Al Jazeera, deputy commander of the Iraqi Air Force, Lt General Faris Hassan Al Zireg Falah, was reluctant to acknowledge any cases of civilian deaths from Iraqi air strikes in Mosul. He noted the need to present indisputable evidence for admission of a civilian death, and stressed the high level of planning that goes into Iraqi air strikes.

“We started [air strikes] before the Mosul operations began, in September,” he said. “If you go back to the design of our air force, we are in the JOC [Joint Operations Center]. We get a grid every day, lay down targets, and then decide as a cell.”

Falah added that Iraqi air forces keep detailed recordings of their strikes through a round-the-clock drone presence above the warplanes over Mosul.

Meanwhile, Ahmed Hayder Hussein, the uncle of the Khodeida brothers, believes the air forces striking Mosul are not concerned as to whether civilians die. He feels that they are singularly focused on removing ISIL, regardless of the civilian cost. 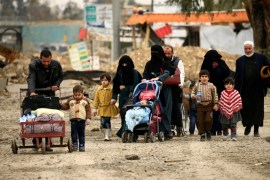 How bad is the humanitarian crisis in Mosul?

750,000 Iraqis are trapped in the western part of the city as Iraqi forces fight house to house to force out ISIL.