Oaxaca, Mexico – This past October at Espacia Zapata, a print shop on a colourful city street in Oaxaca, Mexico, a group of artists from the art collective Assembly of Revolutionary Artists of Oaxaca (ASARO) gathered, surrounded by large hand-cranked presses and stacks of ink covered printing screens.

That night they took to the streets, illegally pasting politically charged screen prints on the walls of Oaxaca City, one of Mexico’s premier tourist destinations, a UNESCO world heritage site and – for the past 10 years – the centre of a burgeoning political street art movement that has arisen from the political turmoil in the southern state.

“The simple act of sticking something out on the street means now you are a criminal,” said Ivan Michel, one of the artists.

“Our art counters and is subversive. [It is] social and, in some cases, it’s political,” added Mario Guzman, another ASARO artist, speaking about the collective’s mission to provide alternative commentary to the state-driven narrative which permeates Oaxacan society and silences dissent, often violently.

Today, Espacia Zapata – named after Mexico’s revolutionary hero Emiliano Zapata – is one of a dozen or so studios/print shops that have arisen in Oaxaca, each owned and operated by independent local collectives of artists.

Together, they represent a renaissance of alternative radical popular political printmaking, and the continuation of a long tradition in Mexico that began before the revolution and gained worldwide renown through artists such as Jose Guadalupe Posada, Leopoldo Mendez and Diego Rivera.

“We understand that we are a continuation of a great tradition in Mexico,” said Mario, whose art seeks to intervene in public spaces with commentary about issues that affect the disenfranchised.

Art as an instrument to support the people

This past year marked the 10th anniversary of ASARO.

Chapo, artist from the ASARO

The group emerged during the 2006 popular protest, when striking teachers – demanding better education in the impoverished state – were met with state violence, resulting in the deaths of at least 17 people. Oaxaca’s residents erected barricades and took over luxury hotels, government buildings, and even television and radio stations.

“Our families, our neighbours went out to the streets to support their teachers,” said Ivan, recalling the protest. “During those actions, I went out as just a kid to confront and to defend.”

Chapo, another artist from the ASARO collective, echoes the same sense of urgency that first pushed the artists to organise. “We were art students and we started painting because people gave us spray paint. That’s how it started,” he explained.

“One of the ideas that we all had was that art is an instrument to support the struggles of our people. That is the essence. It is an instrument that opens discussion or analysis of problems that are developing in our environment,” said Chapo.

ASARO has continued to play a role in changing the appearance of Oaxaca’s city streets. Their work recycles popular imagery remixed with revolutionary heroes, indigenous symbolism, subcultural rebellion, and depictions of villainous politicians.

“To a tourist that walks by and sees our work, they are able to look at the reality of our state that maybe isn’t seen within the international media,” said Ivan.

ASARO continues to be the artistic wing of the now 10-year battle waged by Oaxaca’s teachers’ union against a series of education reforms by the federal government that they argue cement the cultural domination of this historically marginalised region.

For many, the ephemeral nature of street art drives innovation and quality. “It’s [the prints’] life isn’t very long if we put it in Oaxaca’s Centro [downtown] district,” said Mario. “That’s why it is important to create quality work, so people embrace it before the government comes and takes it down.”

While ASARO and groups like them have faced constant censorship and erasure, their popularity has continued to rise.

This reality was on display in October, on the northeast corner of Oaxaca’s tourist and commercial centre, where hundreds of foreigners browsed the art at the third annual Feria Grafica. The event featured dozens of local printmakers and artists – some selling prints for up to $1,000 to tourists and art enthusiasts.

The event, the third of its kind, reflects the growth and evolution of Oaxaca, a city that has become the capital of Mexican printmaking.

“In the 80s, it was very difficult due to the shortage of [printing] presses that were available,” said Ivan. “[But] in 2006, [Oaxaca] became a seedbed of printmaking.”

Today, there are more than 10 workshops that, according to Ivan, work together to “foster brotherhood and sisterhood amongst our spaces and enrich the print community”.

This growth is rooted in the 2006 protests which, Mario said, “opened up alternative spaces”.

In the years since, some of the street art has begun to move into the gallery, as a commercial market has emerged.

“At first, we used to say ‘I can’t make something like this because how am I going to sell it?'” said Ivan. “We had to break through that and say ‘I’m gonna do this because I feel it and it’s what’s happening’.”

“Now there’s a market for this kind of work.”

This popularisation of the Oaxacan prints and their movement “inside” is apparent at art fairs, in galleries and also in the numerous coffee shops, mezcalerias and chic artisanal restaurants that have opened in Oaxaca in recent years. Inside these spaces, owners exhibit the textured woodcut prints infused with indigenous and political symbolism.

The prints are appreciated and sought after for their highly skilled production; techniques handed down from master to apprentice, much like the celebrated Oaxacan culinary tradition.

For the artists, the embrace of the local community has given them hope that their revolutionary art is sustainable, even profitable, allowing them to develop and expand their work.

Yet, regardless of all these changes, their focus remains on the public and the streets.

“When ASARO makes pieces, many of them do end up in the gallery where it’s bought and sold,” said Mario. “But that art was originally destined to be out in the street, in spaces of public domain.”

Back at Espacio Zapata, Mario’s daughter works alongside him. She comes to the studio each day after school. “She is a permanent fixture here,” said Mario.

For Mario, and many Oaxacans, culture, tradition, and collective memory remain a vital part of identity. And art is seen as something that needs to be both inherited and protected.

“When we see that something bad is happening in our community we unite and work together,” said Ivan. “That gets passed down to our youth. They grow up knowing they have to protect one another.”

It also remains a vital source of resistance for the people of Oaxaca who have for centuries fought off domination by outsiders.

“Oaxaca artists printing on the instrument to support the struggles of our people. That is the essence,” said Mario. 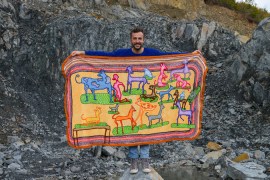 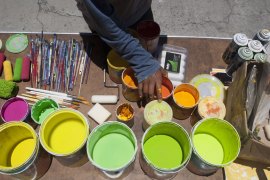 From gangsters to Mexico mural artists