To the left is an auditorium named Edward Said Hall, after the Palestinian American academic, an advocate for the political rights of Palestinians, and a pioneer of post-colonial thought.

Above the doorway of Yasser Arafat Hall, which is to the right, an Urdu poem is inscribed on marble. “Though the dead do die they do not perish,” it opens, a valediction to Palestine’s first president, who died in 2004. For one student on this campus, Maphaz Ahmad Yousef, a 27-year-old postgraduate in the department of Peace and Conflict Resolution, it may as well be a rallying cry.

Maphaz, who came to Delhi from Gaza in 2013, explained that Arafat and former Indian Prime Minister Indira Gandhi were “like brother and sister” – a closeness which reflected India’s staunch support of Palestine, and which she worries has been eroded during recent years.

READ MORE: The beginning of an Israel-India ‘romance’?

“For most Indian people, Palestine is Yasser Arafat,” she said. “Nowadays nobody knows about [President Mahmoud] Abbas like they used to know Arafat. I think Indian media does not care about our case like they did before.”

When Arafat visited JMI in the summer of 1982, the institution likely looked much as it does today: red-painted brick buildings on marigold-edged lawns, students and their books beneath frangipani trees. But the world around it was quite different.

At the time, India, which would become the first non-Arab country to formally recognise Palestine’s statehood, shunned a diplomatic relationship with Israel on the grounds that it was a colonising power.

A postage stamp, then in circulation, pictured the Indian and Palestinian flags billowing in tandem, and declared “solidarity with the Palestinian people”.

JMI’s then-vice chancellor, Anwar Jamal Kidwai, echoed India’s message of post-colonial fraternity as he welcomed Arafat to the school: “Jamia Millia Islamia feels deep affinity with you because we were also born in struggle during the great national movement launched by [Mahatma] Gandhiji in this country against British rule.”

The India that Maphaz arrived in had long ago closed the diplomatic gap with Israel. By late 2013, India was the major buyer of Israeli arms, and would shortly vote overwhelmingly for a Hindu-nationalist government that many commentators felt would naturally veer closer still to Israel.

This July, to mark 25 years of the Israel-India relationship, Prime Minister Narendra Modi will likely pay an unprecedented visit to Israel – the first by an Indian prime minister. He is not expected to take the opportunity to visit Palestine.

Palestinian Ambassador Adnan Abu Alhaija and representatives of the Indian government contend that the relationship between Palestine and India is undamaged – indeed, unchanged – by India’s tilt towards Israel.

In a telephone interview, Ambassador Alhaija listed previous visits between Palestine and India, including a 2015 trip taken by Indian President Pranab Mukherjee to both Palestine and Israel, pointed to Memorandum of Understandings (MoUs) between Indian and Palestinian universities, and mentioned Indian aid programmes in Palestine as evidence of the relationship’s strength.

“The India-Israel relation is bilateral,” said Al-Haija. “It has not affected the Indian relationship to Palestine.”

‘Bride without a bridegroom’

But to Maphaz it seems as though as Indian policy has turned towards Israel, the government’s commitment to Palestine has begun to lessen. “Nobody cares more about Palestine like during Indira Gandhi’s time,” she said. “Nowadays, it’s all towards Israel.”

She was raised on politics – her father, Ahmed Yousef, has been a senior member of the Hamas leadership – but her first order of business in India was personal. She was here to join her husband, an Indian national, and to earn a master’s degree.

She met Badar Khan Suri, a PhD student researching Middle Eastern state building, in Gaza in 2011, when he visited as part of an aid convoy.

Two years later, he was expected back in Palestine for their wedding, but the Rafah border crossing via Egypt – one of the two ways to enter the besieged territory – had been shut down by the Egyptians.

At her marriage party in the strip of land Maphaz described as “our little cage,” she said, “I was a bride without a bridegroom.” Her friends blew up a photo of Badar and danced to Bollywood songs they’d learned by heart.

She hadn’t been in India long when war broke out back in Gaza. Having found Indians welcoming and sympathetic, she was shocked, she says, to discover that the Indian media treated Palestinian casualties as statistics, rather than victims.

That August, Maphaz took the stage at a protest event in the Indian capital as she described what was happening at home. Her family, she told the crowd of hundreds, made sure to let the neighbours know in which room they would all bed down for the night, so they could be found in case the house was turned upside down by an explosion. Gazans identified dead loved ones by their shoes on TV broadcasts. It’s how they found out her uncle had been killed, said Maphaz.

By “carrying the voices” of people at home, Maphaz explained, her time as a student in India has been its own kind of resistance. “Many have the wrong idea about Palestine, but we have convinced many,” she said. “We will never lose hope in India – in the people. We know they care about our case.”

She’s cautiously, determinedly hopeful for the government, too. When, in 2015, India abstained from a UN vote condemning Israel for human rights abuses during the last Gaza war, it was a shock.

“It made me think: I should try to bring this relationship back to the way it was,” she said. “It’s possible, but it will take a long time.”

As part of a new advocacy organisation called the IndoPal Foundation, Maphaz is trying to connect Indian legislators with their Palestinian counterparts, and to reignite discussion about Palestine in India’s parliament. She seems energised by the work – but it’s not easy to find the time. A year ago, she and Badar had their first child.

They named him Arafat.

But for many Palestinian students in India, leaving home means the freedom to leave politics behind. Twenty-nine-year-old Yazan Badram, from Tulkarm in the occupied West Bank, left the country he referred to as “the largest open-air prison in the world” to study in Mysore.

“When I reached [India],” he said, “I decided to focus on what I will study and [discovering] this open country. You can feel freedom in India. I travelled in all the states, and nobody asked me for my identity card or my passport.”

For Badram, who moved back to Ramallah in 2011, expecting more tangible support from India smacks of hypocrisy: “I don’t think India is betraying Palestine. Before we judge India, we have to look at ourselves. Other Arab countries are having more relations with Israel, more than India.”

India, he said, “has done so much good to the Palestinian issue. Maybe now they are having some affairs with the Israeli. So let them. But in the beginning, India was with us”.

Mosab al-Dabbas, 26, studying for a master’s degree in physiotherapy at JMI, was quietly unmoved by his friend Maphaz’s suggestion that to be a Palestinian student meant being a representative of the cause.

“I’m just here to study,” he smiled, kicking his football-booted feet beneath a cafeteria table. It’s personal, not diplomatic relationships, that will keep him in Delhi for his PhD. “The people here will force you to love India,” he said.

Hazem Mohammad Asous, a 20-year-old chemistry student at Aligarh Muslim University, knew very little about the relationships between India, Palestine and Israel when he left his family home in the occupied West Bank and says he is not much more interested in them now.

Hazem has 16 siblings, and his parents, a pair of hardworking farmers, were determined to help all of their children get an education. “It’s very expensive,” Hazem told Al Jazeera by phone. “That’s why I came to India.”

He is not the first in his family to do so: an older cousin paved the way in the 1980s, and since then, a steady trickle of relatives have come to India to take advantage of low fees and affordable living.

Basim Najeeb, a 26-year-old graduate of journalism at St Philomena’s College in Mysore, now working as a company manager in Dubai, followed his older brothers from Ramallah to southern India. “Why India? Because life is cheap.”

“We didn’t care about relations between India and Palestine,” he said, his face grainy over Skype. “At least in India, you’ll learn some English.”

Despite the attractions of an inexpensive, English-speaking education, which Ambassador Alhaija confirmed has always been the chief draw for Palestinian students, the numbers of Palestinians pursuing degrees in India are nothing like what they once were.

In the 1970s and 1980s, there were as many as four or five thousand Palestinians studying in India. Today, there are perhaps 100, he told Al Jazeera, and those so scattered across the great bulk of the subcontinent as to make formal association – the creation of an Indian branch of the General Union of Palestinian Students – impractical.

It’s something he is working to remedy. “When we have big numbers of students, students are very active,” he said. A network of students could help explain the Palestinian cause to Indians across the country. “That’s what we used to do,” he added, recalling his student days in London and Beirut.

During Ambassador Alhaija’s two and a half years in India, five MoUs pledging academic cooperation have been signed between Indian and Palestinian universities. The ICCR, which provides Indian government scholarships to students from across the developing world, has increased the number of grants available to Palestinians from eight to 50, starting in the next academic year.

ICCR head Amarendra Khatua says the intention of supplying foreign scholarships is two-fold: that students will go back to their countries better equipped to help with nation-building, and that they will become a “constituency of goodwill between their country and India”.

To Khatua, the value of bringing students to India has little to do with high-level diplomacy. Above all, he said, “we’re talking about people-to-people contact”.

Yazan Badran would agree. “I already became half Indian,” he said, explaining that there are people in India he counts as family.

When his old English teacher calls him from Mysore she urges him to visit. “Come back,” she asks. “Auntie is making biryani.” 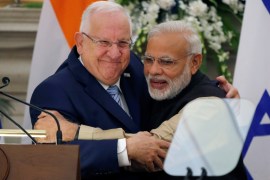 Amid efforts to bring the issue back to the negotiating table, 137 UN member nations have recognised State of Palestine.