On a blazing hot day last August, Mohammad Mustafa and his wife dropped their children off at a neighbour’s house in Aleppo and headed to work.

Mohammad, who worked as a teacher in the western part of the city, received a phone call later that day, informing him that an air strike had hit his neighbour’s home in the rebel-held east.

By the time he arrived back home, it was too late. His 11-month-old boy, Hasan, had been blown across the room towards his three-year-old sister, Sham, and their 17-year-old neighbour, Marwa, who had been watching the children.

Marwa had embraced Sham in an effort to shield her from the blast. Sham survived, but Marwa and Hasan did not.

The very next day, Mohammad returned to work to continue teaching other Syrian children.

“I felt that I had to take revenge on those criminals, and my revenge was to continue on with my message, because they were trying to kill the life inside us,” Mohammad told Al Jazeera. “As a civilian, I had no other means to fight back.”

The education of Syria’s children has long since passed the crisis point.

Since the start of the war in 2011, the country has suffered the largest reversal of education progress ever recorded, as enrolment numbers have dropped dramatically. At least 1.7 million school-age Syrian children are not in school, with another 1.35 million at risk of dropping out. Before the crisis, Syria boasted a 98 percent enrolment rate in basic education.

According to UNICEF, there have been more than 4,000 attacks on schools since the war began. One in three schools has been damaged, destroyed or repurposed by both sides of the war, while at least 150,000 teachers have been killed or fled the country.

Initially, efforts to keep Aleppo’s children in school were scattered, but Mohammad and other teachers in opposition-held areas later began to organise. It was not easy without a budget; teachers had to work on a largely voluntary basis, leaving them without an income to provide for their families.

Our revolution is not a revolution that can be won by ignorant people, so we had to depend on teaching the young generation.

Members of the community in opposition-held east Aleppo formed a new education directorate responsible for overseeing all schools and teachers, appointing Mohammad as its head.

Then, in late 2015, the United Kingdom stepped in with a $15m programme aimed at providing education for Syria’s children despite the ongoing conflict.

“Sickening ‎attacks on schools cannot be tolerated or ignored. Schools should be safe places where children can learn and grow, not targets for bombs and shells,” Priti Patel, the UK’s international development secretary, told Al Jazeera.

The UK and other donors are now helping to fund the salaries of more than 7,000 teachers across 1,200 schools, which serve 350,000 pupils in opposition-held areas of Aleppo and Idlib provinces. The funding has also helped to provide infrastructural supports, such as heating and basic teaching aids, including whiteboards.

For Mohammad and his colleagues, the aid has been a game-changer.

“Under the shadow of the war, offering any level of education is extremely difficult because of our inability to properly function, and with no budget there was almost nothing we could do,” he said.

After Russia became embroiled in the Syrian conflict in the autumn of 2015, there was an increase in air strikes on schools. In 2015, there were a total of 69 verified attacks on schools; by October 2016, that number had jumped to 308.

In response, teachers began moving pupils into small, informal schools in living rooms, basements and mosques. In Aleppo city, the education directorate tried to set up a school on almost every city block, to minimise the amount of time children had to spend on the streets.

But even then, the Russians “followed us with missiles that were bunker busters that could reach the basements, three or four metres underground, and then even the shelters in the basements were not safe any more”, Mohammad said.

Basic survival instincts began to outweigh parents’ desires to keep their children in school, and families were forced to send their children looking for work or food. Mohammad and his colleagues tried shortening school hours and teaching skills that could help pupils to earn money, but they were losing the battle. By late December, those who remained, including Mohammad and his family, were evacuated as regime forces took control of east Aleppo.

Today, Mohammad is continuing his work from the Aleppo countryside. Some of his pupils are from areas once held by the Islamic State of Iraq and the Levant group (ISIL, also known as ISIS), including Manbij and Azaz.

“The ideas that Daesh [ISIL] put in the students’ minds are more dangerous than having no education at all,” Mohammad said. According to UNICEF, more than 600,000 children in Syria are currently or have lived under the control of ISIL.

Whenever the war in Syria ends, it will be the youth who will shoulder the biggest part of the burden in rebuilding their country for the future, Mohammad noted.

“Our revolution is not a revolution that can be won by ignorant people, so we had to depend on teaching the young generation,” he said. “They will have to rise up and know the meaning of liberation and freedom, and know how to use that freedom once we get it.” 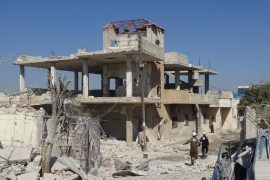 Teachers and aid organisations believe the attacks on schools are deliberate. 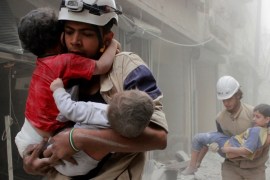