Antakya, Turkey – “Freedom!” was the first chant Lina Shamy shouted against the Syrian regime in April 2011. She remembers her eyes tearing when the word left her throat. She was only 21 when she joined students of Aleppo University during a protest.

Anti-regime demonstrations had started in Daraa in mid-March and spread across the country.

“[The first protest I joined] was 20 April 2011,” says Lina’s husband, Youssef Moussa. As he tries to describe it, a lump in his throat muffles his words. His eyes tear and he pauses.

“The first protest is about breaking your personal fears,” says Youssef. He was 25 years old when the revolution broke out. Like Lina, he was studying architecture at Aleppo University.

Living under a regime that seemed omniscient and everlasting, constantly suppressing political dissent, many Syrians would not talk about politics or even think about it, Lina and Youssef say. Those first chants against the regime transformed their lives.

Sitting in a cafe in the southern Turkish city of Antakya, both are overwhelmed with emotion as they reminisce about the Syrian revolution and the events of the spring and summer of 2011 they lived through just 100km away, in Aleppo.

“The revolution is life in all its aspects. It is the future,” says Lina.

In the first days of the revolution, as videos of protests across the country started appearing – from Daraa to Raqqa – Youssef would lock himself in his dorm room and download each one of them in a hidden folder on his computer. He says he would watch these videos and cry.

Some people say that we got fed up after six years and it's enough. I disagree, after six years of all these people giving up their lives for us to live in freedom and dignity, I cannot leave.

He remembers vividly one video he saw in April 2011: A man by the name of Ahmed Beyasi standing in front of the camera with his ID describing the crackdown on a protest in the village of Beyda near the southern Syrian city of Baniyas (Tartous province). Ahmed spoke out after Syrian state media claimed that a video of soldiers kicking and humiliating protesters in his village was fake.

“He was the first one in Syria to have the courage to show his face in front of the camera and speak,” Youssef says.

Around the same time, Lina stopped going to the Faculty of Engineering to do school work. She says she couldn’t stand listening to some of the students supporting Bashar al-Assad saying that the protesters deserved to die. Instead, she would stay at home and work to the sound of the revolutionary songs that were coming out of protests across the country.

She says her favourite one was by Tariq al-Aswad, a protester who started singing during protests in Homs. He died in 2012 during a bombing by regime forces.

Before the revolution, Lina and Youssef say they were both busy studying and planning how to leave Syria, where they saw no future for themselves.

“[Hafez al-Assad] built a strong military and security structure in Syria. People were even afraid of uttering his name,” recalls Youssef.

Lina says young people felt that the country did not belong to them.

“In school, we had to salute Hafez al-Assad every morning. He was a sacred omnipresent symbol: His image was in classrooms, in universities, in shops, all public buildings, everywhere we’d go. Everything belonged to Assad,” Lina adds.

She says it was her greatest fear that she would graduate and get employed in a bureaucratic state institution and live a routine life regulated to the minutia by the regime.

The revolution not only wiped out this nightmarish scenario, but it also set her on a completely different life path. Taking up the revolution as her calling, Lina started living a precarious new life as an activist. But it was this new life that brought her together with her husband, Youssef.

Although they both studied at Aleppo University at the same time, they did not meet until 2013.

“I was against marriage, to be honest,” admits Youssef. He says he did not want to marry because he thought that the institution of marriage was burdened by “bureaucratic” customs and materialism.

Meeting Lina and getting to know her while working with her on a project to improve housing in a refugee camp in northern Syria changed his mind.

“I started thinking to myself, what do you want? And suddenly decided that I want to marry Lina,” recalls Youssef. He proposed on WhatsApp. He sweated for half an hour before Lina responded with a “yes”. They were married within a month, without the usual Syrian wedding pomp, but with a healthy dose of revolutionary spirit.

“The revolution created this marriage,” says Youssef with conviction. “I love him because he loves the revolution,” adds Lina. The revolution got them together but it also separated them from many loved ones. They have lost a lot of friends and family members since 2011.

“In May 2011, a university friend went to his hometown Binnish [in Idlib province] on a Friday. On Sunday, he did not come back,” recalls Youssef. His friend had joined a Friday protest which regime forces broke down, firing live rounds at the people. “We received a video of him dying – red stains around the heart as he was taking his last breaths. It was our friend, who had been with us just the day before,” says Youssef. That same year, he also lost his brother, who died after regime forces arrested him.

“Some people say that we got fed up after six years and it’s enough. I disagree, after six years of all these people giving up their lives for us to live in freedom and dignity; I cannot leave,” says Lina.

Lina and Youssef lived in Aleppo throughout the months-long siege on the eastern part of the city. They say there were many moments in which they thought they would not see each other. They were some of the last people to leave the city. The loss of Aleppo was a big shock and put many supporters of the Syrian revolution into despair.

“We passed through the loss of Aleppo, the loss of a lot of territory, through psychological and physical illness. But the revolution is bigger than all this. It’s bigger than losing an area or a battle,” says Youssef.

Neither are thinking of giving up on their activism. After a few weeks in Turkey, they are planning on going back to northern Syria to continue with their work.

“There is still hope. There is always hope,” says Lina. 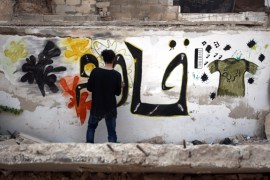 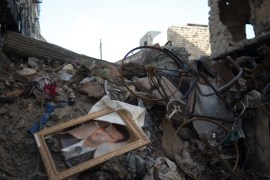 Syrian civil war: How the revolution changed my life

Al Jazeera follows the stories of five individuals whose lives have dramatically changed during the past five years.