Glasgow and Isle of Bute, Scotland – For newly arrived Syrians in Scotland, Munir Emkideh is a man to know. He knows how to get things done. Whether delivering free furniture or filling out forms, the 52-year-old is always on call to help the refugees settle into their new homes.

In the last three years, he has become renowned for setting up a small network through which he distributes donated items to refugees and assists them with everyday tasks.

After arriving in Scotland in 2012, Emkideh, who is from the Syrian city of Deraa, received his refugee status and has been at the core of many community-based projects since.

“When I first came here, I didn’t know anything when I wanted to do simple day-to-day things, so that was the moment I decided to help others,” he explains. “Small things can make the biggest difference.”

Last August, Scotland accepted its 1,000th refugee under the British government’s Vulnerable Persons Relocation (VPR) scheme, which was set up in March 2014.

While former Prime Minister David Cameron had vowed to accept 20,000 Syrian refugees by 2020, so far fewer than 2,000 have been resettled in the UK and many of those went to Scotland. In the six-month period leading up to March 2016, up to 40 percent of Syrian arrivals were accepted by local authorities in Scotland under the scheme, according to the Scottish Refugee Council.

At the peak of the Syrian refugee crisis in 2015, Scotland’s first minister Nicola Sturgeon launched a special task force to help accommodate refugees. But human rights organisations say more needs to be done.

Amnesty International has repeatedly criticised the UK’s unwillingness to accept more of the world’s 4.8 million Syrian refugees and given the post-Brexit anti-immigration sentiment, it is unlikely that will change any time soon.

Although local authorities are providing Syrian families with essentials such as housing, health and social services, refugees still need help with socialising and integration.

Since 2013, Emkideh has been working with the Maryhill Integration Network (MIN), a charity that assists local authorities with settling refugees in Scotland. The organisation develops projects at a grassroots level to help create links between Syrian families and local communities through volunteers.

Remzije Sherifi, the director of MIN, believes introducing the refugees to Scottish culture is a key aspect of helping them adjust to their new homes. But, she says, in order to do so, local people have to be involved.

“Syrian refugees have come from what I call ‘the journey of death’,” Sherifi explains. “People who witnessed the horrors of war or lost their loved ones are living with trauma and, more than anything, it is important that we express how welcome they are in Scotland. They need a safe place where they can feel like part of the community and know they belong to Scotland.”

Last year, the charity launched “Family Nest”, a project aimed at bringing Syrian families together from across Scotland to help them get back on their feet again.

“We try to promote creative writing and other opportunities to engage them. They come from well-educated backgrounds and we have to find out how we can help them use their skills,” Sherifi says.

The project consists of weekly workshops aimed at mixing Scottish and Syrian cultures together through food, arts and dance. Most recently, MIN hosted a “Burns Supper Night” to commemorate the famous Scottish poet Robert Burns. A key element of the event was the trademark haggis dish, with a Syrian twist.

“We had Syrian haggis, Algerian haggis and even Lebanese haggis and everyone loved the various versions of the dish,” she says. “All members of the community came together. Cooking is a huge part of Arab culture, so it was amazing to make that connection through cuisine.”

Sherifi believes Scotland will always be more welcoming than elsewhere.

“With all the negative things [US President Donald] Trump has been saying about Syrians, I must say, Scotland is more welcoming than any other place,” she explains. “Everyone connects organically and this also helps Scots better understand why refugees are here. Through our work, we want to open people’s hearts and minds about what is going on in Syria.”

In conjunction with MIN, a group of Syrian refugees recently travelled to the small rural village of Comrie in the southern highlands to perform a traditional dance after the event organisers decided to bring the communities together through music.

As the performers proudly started their dabke routine, an Arab folk dance common in the Middle East, the largely Scottish audience was happy to experience a part of Syria.

“We were keen as a community to show some friendship through dance,” says Alan Caldwell, a Comrie volunteer who helped organise the event. “Today is about showing each other we are as one no matter where we come from.”

Although negative responses towards refugees in Scotland have been minimal and communities have been largely supportive, a controversial article in the British tabloid the Daily Mail resulted in a backlash after the paper described Syrians living on the remote Isle of Bute as “unhappy” and “complaining” about their location.

The 17 families in the island’s seaside town of Rothesay said they were left fearful of reprisals as a consequence of the article, and many refugees have been reluctant to speak of their experiences since.

Al Jazeera was able to get exclusive access to one family who had arrived in the seaside town over a year ago.

“I was very upset with what the Daily Mail wrote because the journalist just made stuff up,” says Ahmad Mahmoud, who came from the Syrian capital Damascus with his wife and two young children.

“It was all incorrect and we were made out to be ungrateful. When Syrians arrived here, it wasn’t easy to find halal food, but it was something that was made into a big deal, when that is not the case. We are grateful to the Scottish people. Whenever we go out, they always have smiles on their faces.”

Mahmoud’s daughter, eight-year-old Hala, hovers in the background before proudly showing off the gifts she received from local well-wishers.

“I miss Syria a lot, but I couldn’t play outside much because of all the gunfire and fighting,” she says while holding her toys. “Here, I’m making new friends and I love going to see them at school.”

Emkideh, who is in regular contact with the family says refugees living in remote parts of Scotland simply want to rebuild their lives and heal from the trauma they experienced in Syria.

“If the war stops, we would all love to go back and till we can, I would like to thank the Scottish people for their warm welcome and hospitality,” he says. “They are very nice people.” 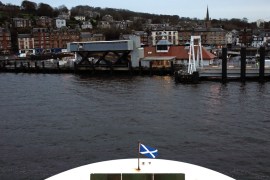 Residents of the Isle of Bute believe the 10 Syrian refugee families will have a positive effect on the community.