Six years to the day since protesters poured into the streets of Daraa, Damascus and Aleppo in a “day of rage” against the rule of President Bashar al-Assad, Syria’s uprising turned global war is far from over.

Six years of violence have killed close to half a million people, according to the Syrian Centre for Policy Research, displaced half of the country’s prewar population, allowed the Islamic State in Iraq and the Levant (ISIL, also known as ISIS) to seize huge swaths of territory, and created the worst humanitarian crisis in recent memory.

International diplomatic efforts have repeatedly failed to bring the protracted conflict closer to an end and the growing role of outside actors has changed the nature and trajectory of the war.

The UN estimates the war has pushed close to five million people to flee the country, many of whom have risked their lives seeking sanctuary in Europe. Hundreds of thousands of others exist precariously in tents and tin shelters in Syria’s neighbouring countries.

An entire generation of Syrian children has either been pushed out of school or forced to cope with interrupted curriculums, makeshift classrooms, or unqualified teachers. According to UNICEF, 2016 was the worst year yet for Syrian children. Nearly three million children – the UN estimated amount of Syrians born since the crisis began – know nothing but war.

The country’s healthcare system, particularly in places like Aleppo, is decimated. More than four-fifths of the country live in poverty.

Basic infrastructure, such as the electricity grid, water lines and roads, is in shambles. As of 2015, 83 percent of Syria’s electric grid was out of service, according to a coalition of 130 non-governmental organisations.

On Monday, in an address to the UN Human Rights Council, UN human rights chief Zeid Ra’ad al-Hussein described the war in Syria as “the worst man-made disaster since World War II”.

Zeid added that his office had been refused access to the country and that no international human rights observers had been admitted to places where “very probably tens of thousands of people are currently held. They are places of torture”.

Any form of solution is basically out of the hands of Syrians.

“Indeed, the entire conflict, this immense tidal wave of bloodshed and atrocity, began with torture,” he said, citing as an example the torture of a group of children by security officials over anti-government graffiti in the southern city of Daraa six years ago. “Today, in a sense, the entire country has become a torture chamber, a place of savage horror and absolute injustice,” he said.

UN investigators have accused the government of “extermination” in its jails and detention centres.

Global watchdog Amnesty International said in a report last August that an estimated 17,700 people had died from torture or harsh conditions while in government custody since the beginning of the conflict. The Syrian Observatory for Human Rights (SOHR) put the number at 60,000.

Many others have been executed, and far more have simply disappeared. Thousands more have died in prisons run by rebel groups and hardliners like ISIL and groups affiliated with al-Qaeda.

Intervention by regional and global players into what started as an uprising of the people against a repressive government has transformed the conflict into a proxy war as international efforts repeatedly stall.

Russia’s October 2015 military intervention helped prop-up a gutted Syrian army and, with the assistance of thousands of Iranian-backed fighters, has helped put Damascus firmly back in control on the battlefield.

The Russian-backed push on the battlefield culminated in the government takeover of rebel-held east Aleppo late last year, dealing the opposition its biggest defeat of the conflict.

As pro-government forces steadily captured rebel territory over the past year, a series of “local truces” in areas crippled by years of government siege saw the transfer of thousands of fighters and civilians to Idlib, the last opposition-held province in the north. The UN has said the deals amount to forced displacement and are thus war crimes.

Earlier this week, increased bombing in the government-besieged district of al-Waer in Homs, the city’s last rebel-held bastion, pushed rebels and their families to sign on to a similar evacuation deal.

Recently renewed diplomatic efforts to bring an end to war have all but stalled, as a nationwide ceasefire agreed upon by Russia and Turkey at the end of last year falls apart.

Since the start of the year, aid deliveries have slowed to a trickle for hundreds of thousands living under siege, according to a recent report by Physicians for Human Rights. Heavy fighting has increased in recent weeks in strategic areas near Damascus, as government forces push to slice off territories from the last rebel-held stronghold close to the capital.

Rebels boycotted a third round of Russian-led talks in Kazakh capital of Astana, ostensibly aimed at consolidating the shaky truce, over continued violence. And although Astana talks succeeded in paving the way for a fifth round of UN-led intra-Syrian talks late last year, little was agreed upon other than a basic format for future negotiations.

The internationalisation of the war in Syria has left it beholden to outside interests, according to associate professor of international studies at Arcadia University Samer Abboud. “Any form of solution is basically out of the hands of Syrians,” he told Al Jazeera.

“Ultimately, what’s on offer is some kind of containment of the violence, but no effort to really eliminate it,” he said. “But talk about a revolution or a political transition … it’s beyond that now.”

READ MORE: Why Bashar al-Assad is still in power?

Key rebel backers like Turkey and the United States have narrowed their agendas in Syria over the past year, as government gains on the battlefield erase the prospect of regime change and domestic priorities take precedent.

Ankara, whose troops now occupy a large section of territory in Syria’s northeast, has given up on removing Assad in favour of preventing an armed Kurdish autonomous region on its border.

The US, who ,along with Turkey and the Gulf states, was central to facilitating the armament of what started as a peaceful uprising, has remained a political voyeur since Donald Trump‘s administration came to power.

Instead, it has remained hyper-focused on making shortsighted, tactical gains against ISIL.

Just last week, the Pentagon deployed another 500 marines to Syria and spoke of the possibility of a long-term US presence in the country.

Infighting and a lack of international support have left rebel forces increasingly dependent on groups with hardline religious agendas. And as the government, Turkey and the US, along with their respective allied forces, race to push ISIL out of its self-declared capital in Raqqa, the international agenda in Syria is shifting the narrative of the conflict.

“Syria is headed towards some sort of perverted version of what has been happening in Iraq or Afghanistan… where reconstruction efforts will be forced to exist alongside low levels of violence,” said Abboud.

“The war economy is entrenched … and outside players are reserving their right to do exactly what they want in Syria under the appearance of international consensus.” 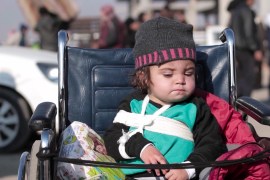 UNICEF: 2016 was the worst year yet for Syrian children