The Hague, the Netherlands – On March 15, the Netherlands went to the polls. Twenty-eight parties are vying for 150 seats in the lower parliament. Several new parties participated in the election including DENK (Think), a party against xenophobia and racism; Artikel 1, a left-wing, pro-multiculturalism party; and the right-wing populist parties Forum voor Democratie (Forum for Democracy) and Voor Nederland (For the Netherlands).

The country has 12.9 million eligible voters. In The Hague alone, there were 272 polling stations located in train stations, schools, retirement homes, museums, city farms, cafes, performing arts spaces, neighbourhood centres and in a bus that drove around town.

Of the 1,114 candidates taking part in these elections, 35 percent are women.

Polling stations closed at 20.00GMT, and the process of counting the votes is under way.

Negotiations to form a new cabinet are expected to be a challenge. Earlier this year, all the major parties pledged not to govern with the anti-immigrant populist Freedom Party (PVV) of Geert Wilders, which topped the polls for a while. The current government, formed after in 2012, consists of prime minister Mark Rutte’s liberal-conservative People’s Party for Freedom and Democracy (VVD) and the Labour party (PvdA).

Al Jazeera spoke to five voters in The Hague and one in Amsterdam about their vote.

Rabia Yildiz, 21, is a law student and volunteer for D66, the progressive liberal party. She lives with her parents, who immigrated from Turkey, along with her brother in Transvaal, a neighbourhood where 90 percent of the residents are immigrants.

“Last year, a friend of mine asked if I wanted to volunteer for DENK. I thought, why not, if this party is against discrimination and racism. But soon I realised they discuss just one issue. This is not going to solve discrimination. Furthermore, not all Dutch people discriminate [against] us – I, for example, have never felt discriminated against – and it doesn’t happen on such a large scale as DENK says it does. This party is only making the dichotomy bigger, just like the PVV does.

I was contacted by people from D66 and we hit it off immediately. I like their nuanced views and that they stress the importance of education, jobs and healthcare. They aren’t following those populist themes about the Dutch identity and integration, like so many other parties these days. In my neighbourhood, we live among many people from different cultures. You learn to deal with people from Morocco, Ghana, Suriname and so on. I think Dutch people who live in neighbourhoods without immigrants miss that ability.

Here it’s a bit of a craze to vote for DENK now. DENK stands up for us, people say; therefore, many people don’t understand why I don’t vote for them. Some people say D66 is an anti-religious party because they are pro-euthanasia, abortion and regulated weed plantations. However, they give everyone the freedom to profess their religion or not. I’m planning to sign up as the town council member, and I’d love to become a member of parliament one day.”

Philip van Praag is a 68-year-old associate professor of political science at the University of Amsterdam. His research focuses on political parties, election campaigns, referendums and the political role of the media.

“For most people who don’t follow politics in detail, the differences between the political parties are at the moment very small. Most of the largest parties want a better healthcare system, are focused on what the Dutch identity is, and want to limit the number of refugees. Only the Groen Links (Green Left) party is somewhat distinctive because of their ideas on sustainability. There are so many political parties in the Netherlands because we have a low election threshold; the chance of winning a seat parliament is rather big.

As a result, many people are confused. Nowadays, voters aren’t very loyal to a party any more. Most of them, including myself, let their choice depend on the campaign – especially on television debates. Even now, I am still deciding between three parties. Probably some people who normally don’t vote for the VVD will now vote strategically for them, to prevent the PVV from winning. During the 2012 campaign, it was about the crisis: How are we going to save money to survive? Now it’s much more optimistic: How are we going to share the wealth? However, it hasn’t been a very exciting campaign.

It is clear people have lost trust in the established parties. Many politicians, like Prime Minister Mark Rutte, have promised things they couldn’t live up to, such as: ‘We won’t give any more money to the Greeks’. I think it will take at least until the summer before we have a new government. It will consist of quite a few parties and they all have different wishes about with whom they want to work with.”

Jolanda Looyer-van der Zwan is a 51-year-old housewife. She lives with her husband in the neighbourhood of Duindorp and voted for the PVV.

“This government hasn’t done anything in the past few years. I think Wilders deserves a chance. It’s not like I agree with everything he says … he shouldn’t have said those things about wanting less Moroccans in the Netherlands.

But it is true that foreign people get everything here. We get discriminated in our own country. Those foreigners say they don’t have jobs, but I see so many of them in shops. For my three children, it’s hard to rent a house, because foreigners with large families get them.

I haven’t hesitated about choosing a party. The whole neighbourhood votes for Wilders. It’s definitely not a taboo here. I think there are enough foreigners. Enough is enough. We, as Dutch people, shouldn’t have to accept everything. It is clear there is something wrong in this country. Criminality is getting worse. But of course, there are good foreigners too. Some of them do adapt, but many others cause a lot of disturbance.”

Cindy de Graaff is 20 years old and is looking for a job. Like most of her friends, she voted for the PVV. She lives with her mother in Duindorp.

“I couldn’t afford to study, so I started working in a hotel and then in a shop, where I learned to become an assistant manager. However, then all those refugees came into the country. A few months ago, my boss told me a foreigner is more entitled to get this position and so I lost my job. Why don’t we close the borders for a while? I think we should first help all the poor Dutch people before we start giving money to foreigners. Dutch people have unfortunately been ignored in the past few years.

This was the first time I could vote. I thinking voting is important for my future. I’ve listened to many television debates, but the choice wasn’t hard to make. My boyfriend also votes for Geert Wilders – in fact, everyone I know is. I think if he gets into power, there will be more chances for me. Some people say voting for the PVV is a waste of your vote, because none of the parties want to govern with them, but if it does become the largest party, I think the other parties will have to change their minds.”

Peter Pronk voted for the Socialist Party (SP). He is 59 years old and volunteers at a nursing home. He lives with his two cats in Duindorp, a neighbourhood where the PVV gained the highest number of votes in previous elections.

“It’s been quite a while since I voted because I actually think there is no use to it. I really lost my confidence in politicians, but for some reason I decided to try it again. It seems like many people voted today. Something needs to change. The rich only get richer. I hesitated quite a long time between the Socialist Part and 50Plus, a party that defends the interests of the elderly. I think healthcare is very important as well as bringing the full benefit age back to 65 instead of 67. If you see how elderly people are treated in this country – it’s quite terrible. They get far too little help. It’s sad because those are the people who built this country up after the Second World War.

There is a lot of discontent about foreigners here, and I agree with many of the PVV’s issues. For example, I think foreigners who are criminals should immediately be sent back to where they came from. But what’s the use in voting for Wilders? He is not getting into power anyway. Besides, Wilders tars with the same brush. A refugee woman from Ethiopia came to live here with her child and in no time her windows were broken in. That’s taking matters too far, don’t you think?

My wife divorced me. Since then, I have had very little contact with my sons and grandchildren. I don’t know why. Unfortunately, I also lost my job as a concierge in a sports centre a while ago, and now I live off unemployment benefits. It’s hard to pay all my bills. Luckily, I don’t have debts any more. But there has been a time when I had to go to the food bank. At my age, it’s impossible to find another job, so I work with elderly people voluntarily instead. I serve them coffee, lay the tables … it’s very nice to do.”

Sikander Ramcharan, 30, studied to become an auxiliary nurse. He is divorced and lives in the central Hague district of Schilderswijk, one of the poorest areas in the Netherlands, where more than 90 percent of residents are immigrants.

“I didn’t really have the time to vote. My grandmother’s funeral took place this week and I had too much to do. I have followed all the debates about the elections though. To be honest, I also had no idea who to vote for. Many of the party leaders have said some good things, which I agree with. I like that young guy from the Green Left party for example. What’s his name again? And the social democratic Labour Party [PvdA] and Christian Union, the Christian democratic political party are not bad either. However, it seems they are quite alike, so in the end, I couldn’t make up my mind.

Last time I voted for the PvdA, but they haven’t accomplished much when they were part of the government the past four years. I am especially against all those healthcare cuts. I used to work as an auxiliary nurse, but unfortunately couldn’t stay.

Many people from Suriname like me vote for Wilders, but I hope the PVV won’t become the largest party. Wilders discriminates [against] people. Of course, I’m also against Muslims who want to wage a ‘jihad’ here, but saying things like ‘They should all be thrown out’, is not good [either]. He wants to forbid the Quran, but if that is really going to happen, there will be a war here.” 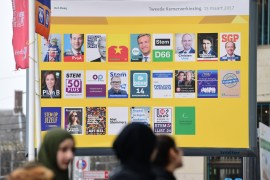 Crucial vote boiled down to a race between Prime Minister Mark Rutte’s Liberals and far-right party of MP Geert Wilders. 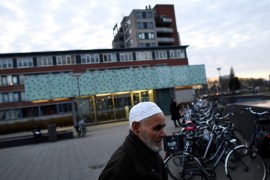 With Geert Wilders dominating the campaign discourse, Muslims are raising their voices to demand equality.