The enormous, shining eyes of an emaciated baby awoke the world to the plight of Madaya, Syria, in January 2016.

The photo, along with other disturbing images of skeletal children reportedly taken in Madaya, came alongside news that more than two dozen people had starved to death in the besieged town. Amid an ensuing international outcry, the Syrian government agreed to a new, two-step aid approval process, in which it would work with the United Nations to streamline and facilitate aid deliveries to the country’s neediest residents.

But more than a year later, that process has proven to be a resounding failure, according to a new report from Physicians for Human Rights (PHR).

“By willfully impeding aid in an attempt to starve civilians, and collectively punishing entire communities through besiegement, the Syrian government is guilty of war crimes.”

READ MORE: Letter from Madaya – ‘Why doesn’t anyone care?’

Across Syria, the government is meting out a “slow-motion slaughter” of Syrian civilians through starvation and denial of access to medical care, the report states.

The new two-step approval process for aid delivery, launched in April 2016, streamlined a previous eight-step procedure for getting critical supplies to besieged and hard-to-reach areas of the country. Under the new system, the UN submits monthly requests for aid convoys and Syrian authorities are required to respond with approval or denial within seven working days.

Approval rates for aid delivery appeared to increase under this system in the months that followed, but fewer people were ultimately reached than in previous years, PHR found.

Between May and December 2016, Syrian authorities approved aid convoys to about two-thirds of the UN’s requested populations – already a subset of the total number of besieged and hard-to-reach populations. However, just 38 percent of the approved populations actually received that aid, with many deliveries stalled or blocked later in the process.

A total of 131 UN interagency convoys in 2016 provided aid to around one million people, a significant decrease from 2013, when just 43 convoys aided 2.9 million people.

“The increased deliveries [in 2016] were vastly insufficient to meeting rapidly growing needs across the country,” the report says, noting that hundreds of thousands of people were left “without any hope of humanitarian aid each month, many for months on end”. Between April and December, convoys on average delivered just two-thirds of the aid needed for the affected populations.

The situation appeared to get worse as the year dragged on: In December, just 6,000 people received aid – less than one percent of the number approved by the Syrian government.

“Throughout 2016 and the entire conflict, we’ve heard of besieged areas lacking humanitarian aid. What our analysis shows that is surprising is just how deliberate and systematic the denial of aid is,” Elise Baker, the lead Syria researcher for PHR, told Al Jazeera.

Many have not received humanitarian assistance for months and are at risk of death and injury from ongoing fighting and lack of medical care.

by Linda Tom, spokesperson for the Syria branch of the UN Office for the Coordination of Humanitarian Affairs

In Douma, for example, just two aid deliveries reached the town during the period reviewed by PHR, providing for less than a quarter of the population and vital medical aid had been removed, Baker said. In Daraya, Syrian forces turned away an entire aid convoy because it contained medical aid and baby formula, despite these types of aid having been previously approved.

As the regime has shifted from “surrender or starve” to “surrender or die” tactics, the situation has become increasingly critical in areas such as al-Waer in the Homs district, Eastern Ghouta, and Madaya and Zabadani in the rural Damascus mountains, noted Valerie Szybala, executive director of the non-profit Syria Institute.

“Whether humanitarian aid gets through or not, most besieged communities will likely be forced to surrender to government terms by the end of 2017,” she told Al Jazeera.

The PHR report highlights the difficulties inherent in a system where the Syrian regime maintains unilateral authority over who receives aid, what type and how much.

In addition to outright denials of aid to certain populations, Syrian authorities have also blocked convoys from delivering aid by introducing new permit requests or security requirements at a late stage, PHR found. 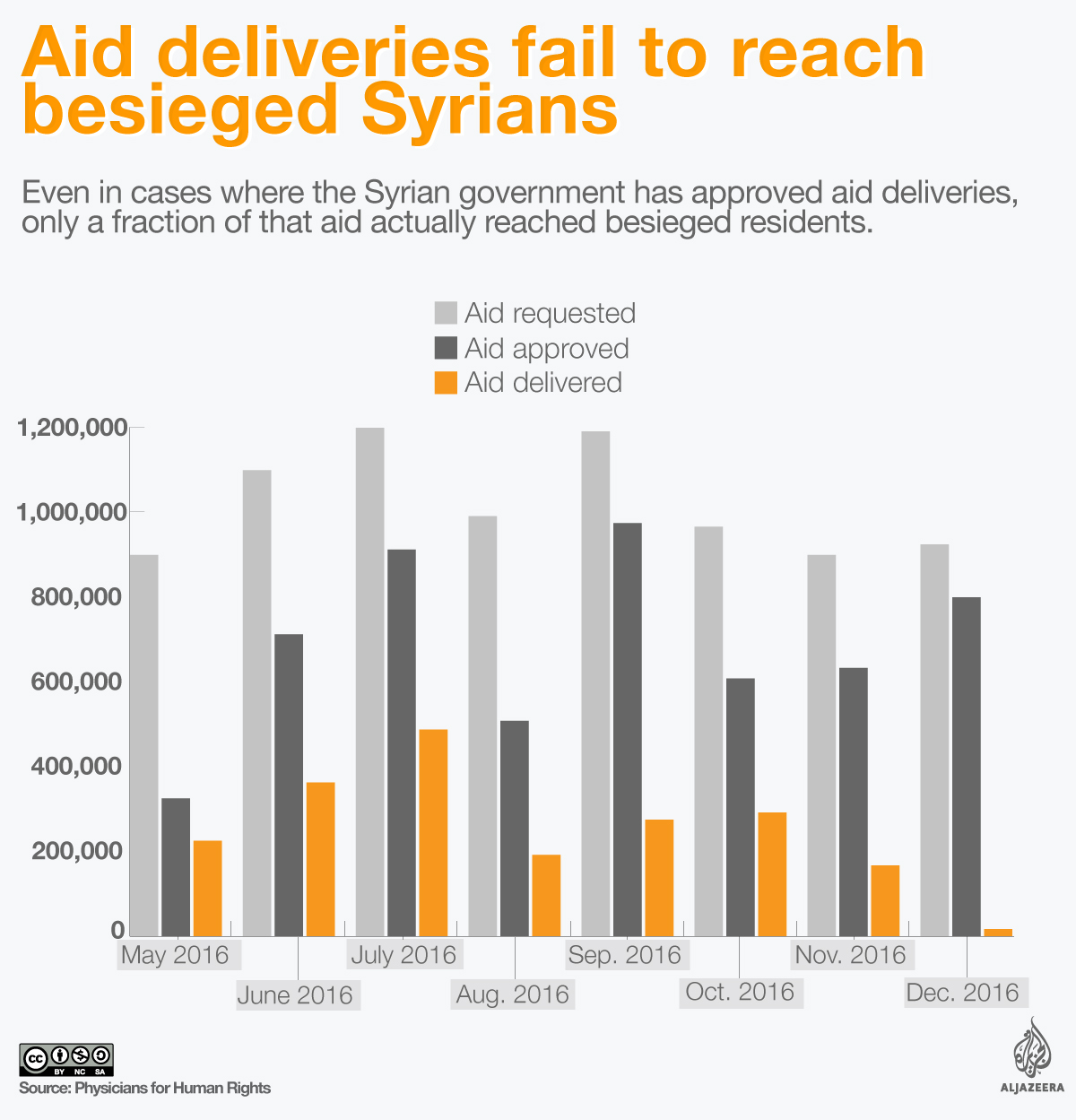 The pattern of increased aid approvals and decreased deliveries reflects “at worst … an effort by Syrian authorities to appear cooperative while still ensuring that access to besieged areas remained blocked”, the report notes.

Samer Abboud, an associate professor of international studies at Arcadia University with expertise on the Syrian conflict, noted that the regime’s siege strategy – aimed at recovering territory from opposition groups by undermining rebel claims to be able to protect residents – has succeeded in making life in many of these areas “impossible to sustain”.

“There have been recent demonstrations in some opposition areas against the armed groups and this is precisely what sort of frustration the regime wanted to create,” Abboud told Al Jazeera. “This way, the population would have been weakened enough to accept any potential arrangement to end the siege.”

Countrywide, nearly five million Syrians live in besieged or hard-to-reach areas, including nearly one million in areas that are actively under siege, in most cases by Syrian government forces.

Living under siege for prolonged periods can lead to a plethora of negative health effects, including stunted physical and mental development, disease and behavioural abnormalities. Without a change in the Syrian government’s policies towards aid delivery, the future for millions of Syrians is dire, said Linda Tom, a spokesperson for the Syria branch of the UN Office for the Coordination of Humanitarian Affairs.

“Many have not received humanitarian assistance for months and are at risk of death and injury from ongoing fighting and lack of medical care,” Tom told Al Jazeera, urging Syrian authorities to allow aid workers immediate access to the millions of civilians in need.

“Lack of safe, unimpeded and sustained access for humanitarians operating in Syria remains the greatest obstacle to reaching people in need,” she said.

So far, the situation in 2017 does not appear to be improving. Despite multiple attempts, interagency convoys did not reach any besieged areas in January or February, although thousands of metric tonnes of aid were delivered through air operations, Tom said – but this is nowhere near enough.

“If UN and Syrian authorities do not reform the aid delivery process, things will only get worse,” Baker said. “What we saw in Madaya last year – dozens of deaths from starvation and malnutrition – will play out again in Madaya and across the country.”