“Israel has just opened the ‘floodgates’, and crossed a ‘very, very thick red line’.” These were the words of Nickolay Mladenov, United Nations’ Coordinator for the Middle East Peace Process, in response to the passing of a bill at the Israeli Knesset on February 7 that retroactively legalises thousands of illegal settler homes, built on stolen Palestinian land.

Mladenov’s job title has grown so irrelevant in recent years that it merely delineates a reference to a bygone era: a “peace process” that has ensured the further destruction of whatever remained of the Palestinian homeland.

Israeli politicians’ approval of the bill is indeed an end of an era.

We have reached the point where we can openly declare that the so-called peace process was an illusion from the start, for Israel had no intentions of ever conceding the occupied West Bank and East Jerusalem to the Palestinians.

In response to the passing of the bill, many news reports alluded to the fact that the arrival of Donald Trump in the White House, riding a wave of right-wing populism, was the inspiration needed by equally right-wing Israeli politicians to cross that “very, very thick red line”.

There is truth to that, of course. But it is hardly the whole story.

The political map of the world is vastly changing.

Just weeks before Trump made his way to the Oval Office, the international community strongly condemned Israel’s illegal settlements on Palestinian land occupied since 1967, including East Jerusalem.

UN Security Council Resolution 2334 stated that these settlements have no legal validity and constitute a flagrant violation of international law. Fourteen UNSC members voted in approval, while the US abstained, a revolutionary act by the US’ brazenly pro-Israel standards.

The US, when still in the final days of the Barack Obama administration, followed that act by even more stunning language, as Secretary of State John Kerry described the Israeli government as the “most right-wing in history”.

Capitalising on the US-Israel rift, Trump railed against Obama and Kerry for treating pompous Israeli Prime Minister Benjamin Netanyahu with “total disdain and disrespect”. Trump asked Israel to “stay strong”, for January 20 was not too far away.

That date, Trump’s inauguration was the holy grail for Israel’s right-wing politicians, who mobilised immediately after Trump’s rise to power. Israel’s intentions received additional impetus from Britain’s Conservative Prime Minister, Theresa May. Despite her government vote to condemn Israeli settlements at the UN, she too ranted against the US for its censure of Israel.

Kerry’s attack on a “democratically elected Israeli government” was not appropriate, May charged. “We do not … believe that the way to negotiate peace is by focusing on only one issue, in this case, the construction of settlements,” she added.

Not only did May’s words define the very hypocrisy of the British government (which committed the original sin 100 years ago of handing historic Palestine to Zionist groups), but it was all that Israel needed to push forward with the new bill.

It is quite telling that the vote on the bill took place while Netanyahu was on an official visit to the UK. In a country greatly influenced by ‘Friends of Israel’ cliques in both dominant parties, he was among friends.

With the UK duly pacified, and the US in full support of Israel, moving forward with annexing Palestinian land became an obvious choice for Israeli politicians. Bezalel Smotrich, a Knesset member of the extremist Jewish Home party, put it best. “We thank the American people for voting Trump into office, which was what gave us the opportunity for the bill to pass,” he said shortly after the vote.

There are also 97 illegal Jewish settlement outposts – a modest estimation – that are now set to be legalised and, naturally, expanded at the expense of Palestine. The price of these settlements has been paid mostly by US taxpayers’ money, but also the blood and tears of Palestinians, generation after generation.

It is important, though, that we realise that Israel’s latest push to legalise illegal outposts and annex large swaths of the West Bank is the norm, not the exception.

Indeed, the entire Zionist vision for Israel was achieved based on the illegal appropriation of Palestinian land. Wasn’t so-called “Israel proper” – as in land obtained by force from 1948 to 1967 – originally Palestinian land?

Soon after Israel occupied the West Bank, Gaza and East Jerusalem in 1967, it moved quickly to fortify its military occupation by unleashing settlement construction throughout the occupied territories.

The early settlements had a strategic military purpose, for the intent was to create enough facts on the ground that would alter the nature of any future peace settlement; thus, the Allon Plan. It was named after Yigal Allon, a former general and minister in the Israeli government who took on the task of drawing an Israeli vision for the newly conquered Palestinian territories.

The plan sought to annex more than 30 percent of the West Bank and all of Gaza for security purposes. It stipulated the establishment of a “security corridor” along the Jordan River, as well as outside the “Green Line”, a one-sided Israeli demarcation of its borders with the West Bank.

While the religious component of the Israeli colonisation scheme currently defines the entire undertaking, it was not always this way. The Allon Plan was the brainchild of Israel’s Labor government, as the Israeli Right then was a negligible political force.

To capitalise on the government’s alluring settlement policies in the West Bank, a group of religious Jews rented a hotel in the Palestinian town of Al-Khalil (Hebron) to spend Passover at the Cave of the Patriarchs, and simply refused to leave.

Their action sparked biblical passion of religious orthodox Israelis across the country, who referred to the West Bank by its supposed biblical name, Judea and Samaria. In 1970, to “diffuse” the situation, the Israeli government constructed the Kiryat Arba settlement on the outskirts of the Arab city, which invited more orthodox Jews to join the growing movement.

Over the years, the strategic settlement growth was complemented by the religiously motivated expansion, championed by a vibrant movement, epitomised in the finding of Gush Emunim (Bloc of the Faithful) in 1974. The movement was on a mission to settle the West Bank with legions of fundamentalists.

Presently, by incorporating the illegal outposts (the work of religious zealots) into the strategically located, government-sanctioned larger illegal settlement blocs, Israeli politics and religion converged like never before.

And between the unfortunate past and the troubling present, Palestinians continue to be driven out of their ancestral land and homes.

But what is the Palestinian leadership doing about it? “I can’t deny that the (bill) helps us to better explain our position. We couldn’t have asked for anything more,” a Palestinian Authority official told Al-Monitor on condition of anonymity, as quoted by Shlomi Elder.

Elder writes: “The bill, whether it goes through or is blocked by the Supreme Court, already proves that Israel is not interested in a diplomatic resolution of the conflict.”

Be as it may, this is hardly enough. It is absurd to argue that it was Palestinians’ purported inability to articulate their position that emboldened Israel to this extent. It is rather the international community’s failure to translate its laws into action that bolstered Israel’s militancy.

The greatest mistake that the Palestinian leadership has committed (aside from its disgraceful disunity) was entrusting the US, Israel’s main enabler, with managing a “peace process” that has allowed Israel time and resources to finish its colonial projects, while devastating Palestinian rights and political aspirations.

Returning to the same old channels, using the same language, seeking salvation at the altar of the same old “two-state solution” will achieve nothing, but to waste further time and energy. It is Israel’s obstinacy that is now leaving Palestinians (and Israelis) with one option, and only one option: equal citizenship in one single state or a horrific apartheid. No other “solution” suffices.

In fact, the Regulation Bill is further proof that the Israeli government has already made its decision: consolidating apartheid in Palestine. If Trump and May find the logic of Netanyahu’s apartheid acceptable, the rest of the world shouldn’t.

In the words of former President Jimmy Carter, “Israel will never find peace until it … permit(s) the Palestinians to exercise their basic human and political rights.” That Israeli “permission” is yet to arrive, leaving the international community with the moral responsibility to exact it.

Dr Ramzy Baroud has been writing about the Middle East for more than 20 years. He is an internationally syndicated columnist, a media consultant, an author of several books and the founder of PalestineChronicle.com. His books include Searching Jenin and The Second Palestinian Intifada, and his latest, My Father Was a Freedom Fighter: Gaza’s Untold Story. His website is www.ramzybaroud.net . 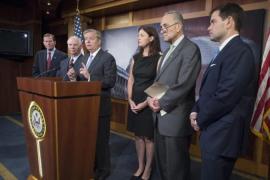 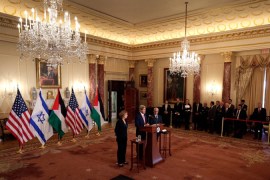 The Peace Process: Never and Forever

Twenty years after Israel and the PLO signed the Oslo Accords, we examine the US’ role as broker in the peace process.