Taiba camp, Syria – Mohammed Jamoul has no job, five children, and subsists on aid from NGOs. He lost one son a year ago in an attack in their native Syria, and today his only home is the Taiba camp for displaced persons.

“I don’t know how long I’ll stay in the camp,” Jamoul told Al Jazeera. “I only want to go back to our house and land, which we were forced to migrate from.”

Jamoul fled his home in the southern Aleppo countryside four years ago, as bombings escalated and government forces advanced. He went to Hajjan and then to al-Bab, before arriving last year at Taiba camp, in Idlib province along the Syria-Turkey border.

Many of the 35,000 Syrians evacuated late last year from east Aleppo, formerly controlled by rebels, ended up in Idlib province, joining locals and internally displaced persons (IDPs) from elsewhere in Syria.

With entry into Turkey severely curtailed as Syria’s war continues in its sixth year, camps such as Taiba have become a last resort for those fleeing the advance of government forces. Conditions in these camps have grown increasingly dire.

“Seasonal diseases spread, sometimes because of the water and lack of hygiene,” Jamoul said, nothing that there was a small medical station near the camp, but no pharmacy – forcing residents to walk around 25km to nearby Harem to obtain medicine.

READ MORE: Life in an ISIL firing zone on the Syria-Turkey border

Those who cannot afford petrol cook with firewood, and all of Taiba’s estimated 1,000 residents live in tents despite the bitter winter weather.

Khalid al-Jaber, who fled Aleppo for Idlib in December, said the conditions in Taiba camp have made his life extremely difficult.

“When we came, there was a snowstorm in the camp and some people died from the cold. We sleep in a tent with five or six people and buy a little bit of food each day,” said Jaber, who is unemployed and subsists on food aid. All four of his sons have been fighting with the Syrian opposition.

But Jaber has no immediate plans to leave, noting that the camp is significantly safer than Aleppo: “Here, we are in the Turkish border region. There’s no bombing against us.”

Turkey hosts more than two million Syrian refugees, but after Turkey shut its border last year, Syrians require permission to enter. Amru, an official with a Turkey-based Syrian NGO who declined to give his last name, said that aid workers had been helping to provide food, clothing and petrol to IDPs in Idlib.

“The border is closed and making an escape is very hard and dangerous,” Amru told Al Jazeera. “They aren’t physically allowed to go live in Turkey. [Because of] that, most choose to stay in Syrian territory.”

Regardless of whether upcoming peace talks in Geneva will bring an end to Syria’s war, the effects of the conflict will have lasting effects on all Syrians. In particular, Jamoul laments the effect on his children’s education.

“My kids have been cut off from their studies for around four years,” he said. “They don’t know how to read or write.” 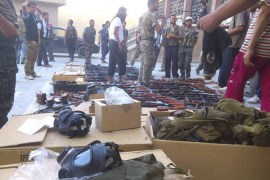 Aleppo: The last battle for Syria

The current fighting in the city marks a turning point in deciding fate of the Assad regime and the uprising in Syria.