Ryazan, Russia – The name Godless Street, a legacy of Soviet-era persecution of religion, did not sound right to some residents of this ancient Russian city. So, historian and publicist Sergei Bizyukin came up with a new one.

“Some saw it as a joke and signed because it was fun, some stood for normalisation of US-Russia ties, and some signed because they don’t like the name Godless Street,” Bizyukin told Al Jazeera.

WATCH: Why do Russians love Putin so much?

The petition generated some media buzz amid nascent Trumpomania, an unprecedented trend in Russia where anti-Americanism has for decades been part of the political DNA. No other US president has been seen so positively in a country that challenged Washington’s post-WWII supremacy, and where many still think the United States masterminded the 1991 Soviet collapse.

The Kremlin’s neoconservative and isolationist agenda aligned with many of Trump’s anti-liberal, populist postulates, and his appreciation of Russian President Vladimir Putin revived hopes that the US will accept Russia as an equal superpower.

After a 45-minute-long telephone conversation between the leaders on January 28, the Kremlin and its loyalists beamed with optimism.

Putin and Trump agreed to “actively work together to stabilise and develop Russian-American interaction – in a constructive, equal and mutually beneficial basis,” the Kremlin said in a statement. It emphasised their agreement to “establish a partnership” to fight the  Islamic State of Iraq and the Levant (ISIL, also known as ISIS), help resolve crises in the Middle East and around North Korea.

Words such as “equal” and “partnership” were music to the ears of many Russian politicians.

After the 1991 Soviet collapse, the Kremlin complained that the White House treated it like an inferior, minor power. Russia fiercely objected to NATO’s expansion in Eastern Europe, Washington’s invasions of Afghanistan and Iraq, and its meddling in the affairs of Western-leaning ex-Soviet nations.

“Kiev, Vilnius, Riga, Tallinn, Warsaw, Oslo, Stockholm, NATO are horrified by the results of the Putin-Trump conversation. Getting ready for ‘hard times,'” he said in another Twitter post listing Eastern European and Scandinavian capitals whose leaders mistrust Russia after the 2014 annexation of Crimea .

Western sanctions over Crimea, along with low oil prices, crippled Russia’s economy. Unsurprisingly, Moscow had paid attention to Trump’s pre-election suggestion to recognise Crimea as part of Russia and to lift the sanctions.

This Trumpomania contrasts starkly with the perennial squall of negative, indecent or outright racist comments that Russian leaders and public figures have made about former President Barack Obama.

Initially businesslike, ties between Putin and Obama soured over an array of issues – including Russia’s backing of Syrian President Bashar al-Assad . Obama cancelled a G-20 meeting in St Petersburg in 2013 and made unflattering remarks about Putin and Russia.

He compared the Russian leader to a “bored kid in the back of the classroom”. Putin was reportedly “infuriated” by the comment. After Crimea’s annexation and amid bloodshed in eastern Ukraine, Obama also called Russia a “regional power” and championed a series of sanctions against Moscow and selected Kremlin officials and public figures.

“Recently, [Obama’s] bad manners and open Russophobia have been supplemented by anger over the election lost by its candidate and an intention to look for those guilty in their loss anywhere but home,” Deputy Foreign Minister Sergei Ryabkov said in a comment posted on his ministry’s website in mid-January, referring to Hillary Clinton’s defeat and claims that Russia organised hacker attacks against the Democratic Party.

“Obama should get a D for flunking because of his [performance] as a head of such a huge state as America,” Vladimir Zhirinovsky, who heads the ultra-nationalist LDPR party, said in late December.

A month earlier, Zhirinovsky told an obscene joke about Obama and German Chancellor Angela Merkel during a live show on the national Channel One. The sound of his laughter has become a popular ringtone.

In April 2016, a confectioner in the Volga region announced the launch of Obamka – a chocolate-glazed ice cream with a depiction of a dark-skinned cartoon character. The factory claimed that the packaging was inspired by a Soviet film about an African boy and denied the name had anything to do with Obama.

Nine days before Trump’s inauguration, as Obama expanded sanctions against Russia, foreign ministry spokeswoman Maria Zakharova described him and his administration as no less than ungodly.

“God created the world in seven days,” she wrote on Facebook. “The Obama administration has seven and two more days to destroy it.”

As a result of this Trumpomania, many Russians have warmed up to the US.

In January, 49 percent of them were negative about the US, according to the Levada Center, Russia’s last independent pollster. A year earlier, the number reached a staggering 81 percent, Levada said .

Some Russians even see Trump as a political messiah who will rid the US of liberalism, globalisation policies, and same-sex marriages.

“America is an unhappy nation and Trump arrived to make it happy again” was the name of an analytical show aired in late January by Czargrad TV, a neoconservative, Orthodox Christian television network whose shows often feature homophobic, anti-Western, or monarchist figures.

On the day of Trump’s inauguration, Czargrad TV threw a party with dozens of neoconservative political activists and heads of pro-Kremlin media outlets. One brought along a “triptych” of oil portraits of Trump, Putin, and French ultranationalist Marine Le Pen – the pillars of a new political order in the US, Russia and the European Union, she said.

“We see that Barack Obama and his administration have done everything to worsen ties between Russia and the US, to dictate their will to the entire world, to topple the legally elected leaders they don’t like,” Maria Katasonova, a former member of the United People’s Front, an ultraconservative nationalist group, told Al Jazeera.

“Trump has said that he will stop the practice of organising colour revolutions, that indeed are coups, throughout the world, and, finally, a dialogue with Russia will be normalised,” she added.

She missed the fact the “colour revolutions” that triggered the resurgence of anti-Americanism in Putin’s Russia took place during former President George W Bush’s rule.

Moscow accused Washington of organising the 2003-2004 “Rose Revolution” in former-Soviet Georgia and the 2004-2005 “Orange Revolution” in Ukraine, which brought pro-Western leaders to power and undermined Russia’s political clout there.

But not everyone revels in Trumpomania.

A top foreign affairs official in the Russian parliament suggested that Trump’s political agenda, focused on his “America First” motto, will inevitably clash with Russia’s interests.

“We definitely should not expect a road covered with roses,” Konstantin Kosachyov said in televised remarks in early February.

A Moscow-based political analyst warned that the “bromance” between Putin and Trump may end in a bitter political divorce.

“I don’t understand the euphoria that arose after Trump’s election,” Alexi Mukhin told Al Jazeera. “Most likely, a harsh disappointment awaits the part of Russian society that sympathises with him.” 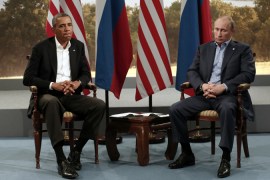 What is Moscow and Washington’s endgame in Ukraine, and how could their strategies affect global security? 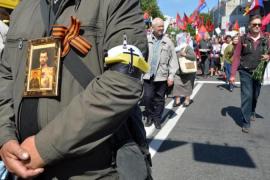 Is Russia reviving its empire?

Pundits are missing the point in their analyses of events in and around Ukraine. Things are simpler than they appear. 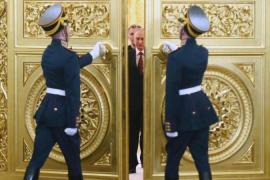