Occupied West Bank – The Israeli Knesset has advanced controversial legislation that, if approved, would lead to a host of illegal settlements built on privately owned Palestinian land being legalised retroactively.

The so-called “Regulation Bill”, scheduled for a vote on Monday, would apply to around 4,000 settlement homes in the West Bank for which settlers could prove ignorance that they had built on privately owned land and had received encouragement from the Israeli state to do so.

The bill has been criticised by human rights groups and legal experts who have warned that it would violate property rights. The government’s attorney general has said that the bill was unconstitutional and would contradict Israel’s legal obligations under international law, while Israeli MK Tzipi Livni warned that it would lead Israeli soldiers to the ICC.

“The Knesset would be legislating a law that applies only outside of its jurisdiction and only for settlers, not Palestinians. This is very problematic and even unconstitutional. The law will also give a green light for settlers to build wherever they want, because they will know that the construction could be legalised in the future,” she added.

The legislation was initially advanced in late 2016, as a response to the plan to evacuate the illegal Amona settlement. It was delayed several times amid harsh criticism internationally and pressure from the Obama administration. “It is another big step towards annexation and away from the two-state solution,” said Ben Nun.

In the hours before the evacuation of Amona settlement that began on February 1, Israel revealed that 3,000 new settlement homes would be built in the occupied West Bank.

The announcement brought the total number of new settlement units approved since the inauguration of US President Donald Trump to more than 6,000 across the occupied Palestinian territories.

In between the construction declarations, Israeli politicians from the centre right to the far right have expressed the hope that their pro-settlement agenda would be favoured by the Trump administration.

Last week, Israeli officials gave final approval for 153 settler homes in occupied East Jerusalem that had been frozen under pressure from the previous US administration of Barack Obama. Trump has pledged strong support for Israel, and Benjamin Netanyahu’s government has moved quickly to take advantage.

Israeli Prime Minister Netanyahu has pledged to lift all restrictions on building in East Jerusalem, while Education Minister Naftali Bennett proposed legislation to annex the Ma’aleh Adumim settlement and the so-called E1 area.

If Netanyahu were to remove the limitations on approving building plans in East Jerusalem, the previously halted settlement plans in Givat Hamatos and E1 could be resurrected, both of which would threaten Palestinian territorial contiguity between Jerusalem and the West Bank in a future Palestinian state.

Israel is trying to take advantage of the friendly rhetoric of the new American administration and protest it at the same time.

The E1 corridor is located in Area C, which refers to the 60 percent of the West Bank under full Israeli administration and off-limits to the Palestinian Authority.

“In the internal Israeli arena, there are those on the right wing who really want to rush forward. Givat Hamatos could happen tomorrow if the government wishes that,” said Aviv Tatarsky, a researcher at the Israeli NGO Ir Amim. “That would have a very big effect on disconnecting East Jerusalem from Bethlehem and the south of the West Bank.”

Similarly, building approval in E1, which is home to a number of Bedouin communities, would almost cut the northern West Bank from the south. Bennett’s effort to annex the settlement and E1 has been put on hold until after Netanyahu meets with Trump in Washington on February 15.

The White House responded to the raft of settlement approvals in a statement, noting that settlements were “not an impediment to peace”, but that building new settlements “may not be helpful”.

While the statement appeared to signal a softening of the long-term US position that settlements are a major obstacle to peace negotiations, it was also interpreted as a rebuke to Israel over the January wave of settlement activity.

Ghassan Khatib, a political scientist at Birzeit University, said the statement suggested a change in rhetoric on Israel-Palestine from President Trump.

“It is not exactly similar to the usual line of previous administrations. But it is, relatively speaking, a departure from what everybody has been expecting from this current administration,” he said.

“Israel is trying to take advantage of the friendly rhetoric of the new American administration and protest it at the same time. But apparently, as usual, Israel went beyond any acceptable standard; that they seem to have embarrassed even this new administration.”

During the years of the Obama administration, Israel also promoted building plans on a large scale, although the pace of new approvals slowed after the failure of the Kerry peace talks in 2014. The reduction in new announcements at that time coincided with increased construction in areas where plans had previously been approved.

According to the Israeli human rights group Peace Now, Israel had begun building 1,195 housing units in settlements in the first half of 2016, which they said marked a 40 percent increase on the previous six month period.

“We had more or less the same during different presidents, except Obama. Obama gave in to the pressure of Israel in his first term,” Khatib told Al Jazeera, adding that internal Israeli political mood during this period was extremely conducive to settlement expansion.

“I think Obama was trying to put some mild pressure on Israel that might have reduced the volume of expansion compared to what could have been the case without that pressure. But, I think that Obama did not do enough. I think he gave up very quickly, reduced the level of pressure to the verbal level and gave up on efforts for the peace process,” he said.

If the “Regulation Bill” is passed by the Knesset, rights groups warn that it would mark the end of the two-state solution.

“It is another big step towards annexation and away from the two-state solution,” said Ben Nun. 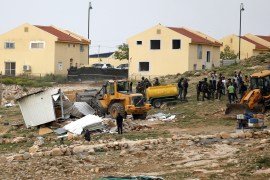