Ramallah, Occupied West Bank – Palestinian officials have called for a boycott of Israel‘s military court system after Nael Barghouti, a Palestinian freed in a prisoner exchange, was rearrested and sentenced to a life term plus 18 years. Palestinian Prisoners’ Club director, Qadura Fares, told Al Jazeera that the military court system was discriminatory against Palestinians, citing two recent high-profile cases to pass through the courts.

“There is a shining example from the past few days. For the Israeli killer, Elor Azaria, the military court sentenced him to one and a half years. Twenty-four hours later, they put Nael Barghouti in jail and sentenced him to life in prison and another 18 years. It happened within 24 hours,” he said.

Israeli soldier Azaria was sentenced to 18 months in prison for manslaughter on February 21, after he killed a wounded Palestinian assailant who no longer posed a threat in the occupied West Bank city of Hebron last year. The United Nations human rights office said the sentence was “excessively lenient” and “unacceptable” for an “apparent extrajudicial killing”, while local rights group Adalah said the sentence was “an expression of the disregard for the value of Palestinian life”.

Barghouti was initially released in the 2011 Gilad Shalit prisoner exchange between Israel and Hamas, but was rearrested in 2014 and served 30 months in prison for being a member of Hamas.

Boycotting military courts would show that we are refusing such a system to operate within the West Bank and refusing 50 years of brutal occupation that is just getting worse and worse.

He was due to be released in November 2016, but on February 22, a military court reinstated an earlier life sentence for his role in planning the kidnapping and killing of an Israeli soldier. Barghouti was first sentenced to life in 1978 and has now served a total of 36 years in prison.

“We need to stop being a part in these dirty games, to send a lawyer and to be part of this game. It creates misunderstandings with journalists and the international community that Israel is ruling by laws. It’s not the truth,” Fares told Al Jazeera.

“We have to stop being part of this lie and misunderstanding. We have to be clear that there is no justice.”

Palestinian officials first called for the boycott at a press conference in Ramallah on Sunday, where Fares spoke along with Barghouti’s wife, Iman Nafie, and the head of the Palestinian Authority’s Commission for Detainees, Issa Qaraqe.

“One must take the difficult decision of rebellion and boycott of the courts,” Qaraqe told the press conference, while Fares called on families of detainees not to pay fines imposed by courts and urged prisoners’ rights groups not to take part in military trials.

There has not been a mass, organised boycott of the Israeli military court system, although individual prisoners have refused to attend hearings and rejected the authority of the courts.

The idea of a collective boycott was welcomed by Addameer, a Palestinian prisoner support and human rights association, which said it would support such a move if a consensus between prisoners and rights groups was reached.

“The high conviction rate within the military court reached 99.7 percent, which shows the lack of fair trial guarantees within these military courts. They lack impartiality and have been unjust to Palestinian prisoners. Boycotting military courts would show that we are refusing such a system to operate within the West Bank and refusing 50 years of brutal occupation that is just getting worse and worse,” said Layth Abu Zayed, a spokesperson at Addameer.

An article in a 2009 military order permitted Israel to re-arrest prisoners released in previous exchanges and reinstate previous sentences based on a secret file that is not accessible to the ex-prisoner or his/her lawyer.

According to a January report by prisoners’ rights groups, approximately 56 prisoners released in the Shalit deal are currently held in Israeli jails. Fifty of these prisoners had their previous sentences re-imposed by a military committee.

The report found that at the turn of the year, some 7,000 Palestinians were being held in Israeli jails. 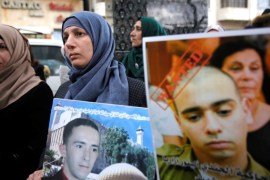 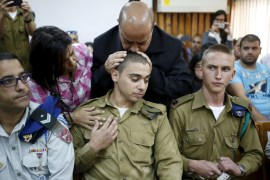