Camalo, Italy – Saeed Mohammed, 20, is among the six African men who now live with the Calo family – Antonio Silvio, Nicoletta, and two of their children – in Camalo, a small town in the region of Veneto in northern Italy.

Mohammed left the Ghanian town, Boku, because he felt unsafe in an environment of ethnic and religious tensions. Going back, he says, “would be a disaster”. Back home in Ghana, he lost his mother and father to the sectarian violence.

His journey to Italy took him to Libya, from where he attempted to cross the Mediterranean Sea. He was rescued from a sinking boat in the middle of the Strait of Sicily by a patrol boat.

IN PICTURES: On Europe’s doorstep – Refugees stranded in cold

Camalo is a town of about 2,000 in the province of Treviso, surrounded by other small communities that make up the fabric of the Padan Plain, with the Dolomites always visible in the distance.

The Calos have hosted six refugees since June of 2015, providing them with psychological assistance, food, and the safety of a home. They have also helped them integrate into the local community.

Antonio Silvio Calo, the head of the household, is a philosophy teacher at a local high school. He recognises the complexities of the refugee crisis in Europe and also just how unfavourable sentiment towards migrants in his community can be. His aim is to lead by an example that he hopes will be replicated nationwide and beyond.

The family aims to not only host the refugees, but also provide them with the necessary skills to navigate life in Italian society, as contributing members through work and “respect for the law”, he says. All the young men have taken Italian language classes and undergone formal, paid training in agriculture, typography, and hospitality. Two of the young men have been hired as waiters in local restaurants.

The men are part of the family. Chores are shared, as are other responsibilities and duties.

Neighbours and friends regularly visit the family. Meals prepared for at least 10 people are the norm. They rarely watch TV, but use the common area to socialise. A crucifix reminds visitors of the family’s Christian roots, which Calo says have informed the family’s decision to help refugees.

On Friday mornings, the young men, who are all Muslim, dedicate their time to prayers. But on Friday afternoons and Saturdays, they stand available to help out the local community. They “help other families move from one house to the other, cut wood, set up stands for local fairs, you name it,” Calo says.

The community has also come forward to help them. One neighbour, who once worked as a journalist, volunteered to teach them Italian, and the men are quickly gaining fluency. Another, donated bicycles for the young men to use.

Three of the young men play football for the town’s team. Andrea and Francesco, the Calo sons, also play. On Sundays, everybody rests.

‘It will be your hell’

Yet, despite the idyllic impression, the family and the young migrants face many challenges. The Calos live in an area of Italy where anti-immigrant party Lega Nord, also known as the Northern League, has dominated the political debate for the past two decades. The current regional governor, Luca Zaia, a Northern League member, was born only a few miles away from here.

Families hosting refugees is not a common trend in Italy. Refugees and migrants mainly stay in designated centres throughout the country, waiting for asylum or residency requests to be processed. Conditions in these centres are appalling, and reports of violence abound.

The influx of migrants into Italy in the past years – approximately 181,000 arrivals only in 2016, with more than 5,000 dead in the Mediterranean crossing – has caused a rift in national public opinion.

More than half of Italians say that increasing diversity will make their country a worse place to live, according to a Pew Center report. Almost three out of four Italians disapprove of the European Union’s handling of the refugee crisis.

The Northern League, among other parties, has capitalised on this division, campaigning on an overtly anti-immigrant ticket. During campaigns in 2010, for instance, Northern League activists infamously distributed soap to people so they could wash their hands after touching migrants.

In December 2016, the party led a march against upcoming plans to resettle 98 refugees in a former military building on the Montello, a hill in the nearby town of Volpago. One of the placards at the demonstration read: “Welcome to Montello, it will be your hell”.

According to latest Ministry of Interior figures, there are at least 13,000 refugees or asylum seekers currently in the region of Veneto, and more than 173,000 nationwide.

The six men living with the Calo family, nonetheless, retain a favourable opinion of their new community. “If they think poorly of me, that’s their problem,” says Mohammed of the demonstrators.

READ MORE: Lost at sea – The search for missing refugees

The Calos decided to open their doors to migrants and refugees when yet another boat capsized in the Strait of Sicily on April 18, 2015. To this day, of the at least 700 that went missing in the waters of the torrid sea that day, only a few bodies have been recovered.

“I just said: ‘enough’,” Calo remembers telling himself after hearing the news. “The only thing we could do is just open the doors to our home,” Nicoletta, his wife, adds.

A week later, about 30 refugees who had been rerouted from Sicily arrived at a nearby parish and the Calos went to visit them.

“We started getting closer to these people, my wife especially,” Calo recalls.

“I don’t speak French or English, only school-level German. But communication, at least on essential things, was seamless. I just wanted to make them feel someone like cared about them. Their stories are very dark, and we’re very lucky, and we don’t realise,” Nicoletta says.

“It was 7pm in the evening in June, and it was still bright,” Nicoletta Calo recalls of the day the men arrived. “They came down with their black bags, while the others looked on.” Not all in the neighbourhood were thrilled to see the refugees arriving. “You’ll see when your wife and children will get raped,” some told the Calos.

“Some neighbours would no longer say ‘hi’, their faces and gazes tense. There were several episodes of intolerance, there were threats on social media, and some neighbours thought their children would get sick [because the migrants were near]. We just decided not to stoop to their level,” Calo recalls.

Speaking to Al Jazeera, the Italian Council for Refugees (ICR) explained that the action of private citizens and families, or parishes, opening their doors and welcoming refugees in their homes falls under the definition of “extended hospitality”, which is done in collaboration with the police and through an authorised entity.

Calo helps the men bypass the temporary shelter centres, but he also offers the bonus component of professional training, Italian classes and the warmth of a family.

The family is entitled to receive the financial allocations for the six refugees. A local cooperative organisation, which receives funds from the EU and the Italian government and allocates these funds, as well as material assistance to refugee centres, has agreed to help the family administratively and financially.

“Between my wife and me,” Calo explains, “we barely make 3,000 euros ($3,200) per month.” Both Nicoletta and Antonio are teachers, so the extra funds they receive through the co-op help them pay them for food, utilities, and medical bills for the expanded family.

The extra money even allowed them to hire a psychologist. “The amount of trauma these men have experienced in their journey here is something we’re simply not equipped to deal with ourselves,” Calo says. They have also hired a coordinator that could assist them in dealing with daily life and chores when the Calos are at work.

The family also re-invests the money in the local community – buying food locally and supporting local enterprise, by allowing the men to take on paid training with local companies. The funds help bring prosperity to more than just the new members of their family.

Many Northern League flags decorate houses nearby. But the Calo house displays the European Union flag. The initiative of aided integration into society the Calo family has led for the past two years seems promising, but it has so far garnered little momentum in society at large.

“You can’t just leave with your bag like a tourist,” says 20-year-old Siaka Togola, of what it means to be a migrant. “If you don’t have [the right] papers, it’s like being in the desert.” He left the Ivory Coast two years ago in search of better economic opportunities in Europe. His journey took him through Burkina Faso, Niger, Libya, and finally Italy, which he reached on a dinghy on his first attempt.

Mohamed Humma, 28, another member of this extended family, was once a carpenter working for a former minister in The Gambia, Abdou Kolley, Minister of Finance under President Jammeh. He says he escaped from political persecution in December 2014.

His leg shakes as he recalls the steps he took to reach Italy. He crossed the Mediterranean Sea from Libya, he says, where he spent four months, 22 days of which he was held in a national prison without charges.

Libya was “very dangerous“, he says, but he felt a sense of “freedom and safety” when he arrived in Italy. 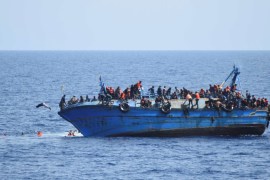 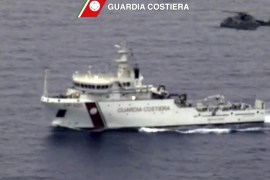 Tunisian Mohammed Ali Malek given 18-year sentence for incident in which only 28 survived out of about 850 on board.