Senegal’s solitary radiotherapy machine broke down on December 28 last year, leaving the country’s only radiation therapist and small team of technicians idly waiting as patients were turned away or offered alternative treatments.

The machine uses radioactive cobalt-60 to produce gamma rays that halt tumors in organs near the skin. Installed in 1989, it is from a generation of devices that are completely phased out in most developed countries.

The machine has broken down many times before. Doctors who are familiar with the technology say such a machine should normally not exceed 20 years’ use.

The Senegalese government promises that three state-of-the-art linear accelerators, which are standard elsewhere, will be installed by August.

This is somewhat surprising given that Senegal’s hospital system is a reference for the West African sub-region.

Patients cross borders to receive diagnoses, treatments and surgeries. The hospital in Dakar boasts a research unit and some of the only modern DNA sequencing machines on the continent.

The strength of the country’s health system, which doctors are proud to say is more than 100 years old, is due in large part to a long-standing high level of medical education in Senegal.

Medical students from Algeria and Morocco come to Dakar for research and studies. Yet the system is fragile and overwhelmed.

Almost 14 million people live in Senegal, but only a handful of doctors focus on cancer.

Doctors in the developed world recommend one radiation machine or linear accelerator for every 200,000 people. Senegal has one, and this year it is broken. So the lines in the cancer ward are long.

We were fascinated by this story and wanted to film it. But accessing the primary city hospital with cameras has always been nearly impossible. This time, things looked different, and the small team of cancer doctors appeared to welcome us.

We took the opportunity with caution. It seemed this crisis had struck the cancer team personally, and at least several were eager to talk. Behind closed doors and off-camera, some spoke of their anger that such an old and sometimes dangerous machine would still be the standard for the country.

“We should have linear accelerators,” they said, shocked that the state had not invested a few million dollars in the new machines. The staff had been trying to raise awareness of the machine’s consistent failure since 2015, when it broke down and electrocuted a patient on the table.

It also burned others. They were amazed that only now the media seemed to be taking notice.

They took us in to see the device, to look at the bespoke plastic masks that were made to hold patients still, and to watch as the great old machine head – with radioactive cobalt 60 at its centre – swivelled in a wide arc over a cold plastic bed.

Interviewing patients, which we had assumed would be the straightforward part of the shoot, was even more difficult. The word cancer leaves a deep stigma across these wards, even though it is written in clear red paint on the entrances.

Babacar, our fixer, kept saying: “It’s like Aids, you don’t tell people you have it”.

One divorced patient said that if she were known to have cancer, she would never be able to marry again. Another wanted to ask her husband for permission before speaking. A third refused to show her face.

Several agreed on the terms that cancer never be mentioned, which was of course, not possible.

After two days of asking patients for interviews, we were leaving empty-handed when a nurse called me to join her at the foot of the stairs. “A patient upstairs can see you, you can film him”. We were thrilled and nearly raced up the steps. She grabbed my arm. “You cannot use the word cancer,” she said.

I asked Babacar whether I had heard her correctly.

“It’s taboo,” he told me. But we’re in the cancer ward, I said. “Don’t use the word,” she insisted, telling us that the patient’s grandson was there with him. “Does he know it’s cancer,” I asked? Yes, he did.

We entered the small cell in the recovery ward to find an 84-year old man wearing a neat scarf, a small religious hat and a wide smile. He had been a soldier for Senegal, one of the revered veterans who stood up as the shackles of colonialism were cracking but not yet breaking in the 1950s. He was sick, but feeling fine.

He had a basket full of medicine and a catheter bandage on his hand. We interviewed him, learning that he had no pain and that he was happy to pay whatever was needed for the treatments he received for his mysterious ailment.

“Treatments should be expensive,” he said, because medical expertise should not come cheap. No mention of cancer.

The interview ended and the nurse came in. She pulled back his gown to reveal a wide chest bandage. “This is for the tumor we removed,” she said, as if tumor and cancer were two entirely unrelated terms.

Beyond the hospital, we were led by a member of Senegal’s League for Cancer (LISCA) to a younger woman of 40, living in the suburbs, who was suffering immensely from breast cancer.

She let us interview her in her home, with her family near, something that was clearly very upsetting to her.

She was undergoing constant chemotherapy. Her hand was swollen and her voice was soft. I asked about her diagnosis. She deferred entirely to her doctors, saying that she was not given choices in her treatments, and the costs, as we had also heard at the hospital, were unending.

Family supported her for visits: a few hundred dollars here and there, with the total running into the thousands.

Our shoot extended over two days, but by the end, we had enough material and strong voices.

We called once more, the day after our long hospital visit, to ask specifically how many patients had received burns – or other injuries – while fixed to the old machine’s table.

“No more calls please, no more questions” was the only answer after the call had been passed from one hand to another. Word had gone round. The window of availability and openness had closed. 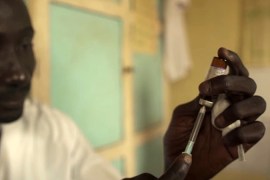 Senegal strives to get medical care to all

Ebola-ravaged country goes all out to improve innoculation programme to protect children from preventable diseases. 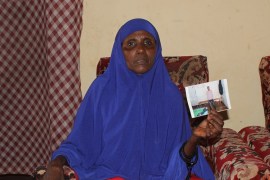 Meet the Kenyans too poor to afford cancer treatment

The stories of two cancer patients reveal the desperate plight faced by those who cannot afford private care. 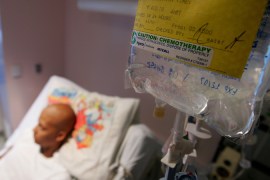