On a spring morning in 2016, a retired four-star general, who was forced out of his job by then-President Barack Obama, spoke before defence and foreign policy experts gathered just blocks from the White House.

The 65-year old speaker, with silver hair and puffy eyes, was blunt. For all the dangers al-Qaeda and the Islamic State of Iraq and the Levant (ISIL, known as ISIS) pose in the Middle East, he warned that the Iranian regime “is the single most enduring threat to stability and peace”.

He recalled that as commander of US troops in the Middle East, the first three questions he would ask his subordinates every morning “had to do with Iran and Iran and Iran”.

“We only pray, the rest of us outside this town, that someone good is listening here,” he told the Washington crowd, as he issued an ominous prediction: “The future is going to be ghastly”, and that “the next president is going to inherit a mess”.

As the man who oversees the 1.3 million US troops, manages Pentagon’s $582.7bn budget, and directs military policy, Mattis has Trump’s ear. The US president fondly calls him “Mad Dog Mattis”, although the former general refers to himself as “Chaos”, his Marine call sign.

Supporters said he is best suited for the defence job because of his combat experience in Iraq and Afghanistan, as well as his “strategic mind”. Former US defence chief Robert Gates called him a “warrior-scholar”.

But critics said Mattis’ fixation with Iran, combined with the president’s hostility towards the oil-rich Gulf state, could lead the United States into a replay of Iraq – only this time with a much more “disastrous” consequence to the region.

Media reports had suggested it’s the same eagerness for confrontation with Iran that prompted Obama to fire Mattis as Central Command chief in 2013, at a time when the US and other world powers were trying to engage Tehran and secure a nuclear deal.

Now Obama is out and Mattis is back.

Already, the war of words between the US and Iran has intensified in the first three weeks of Trump’s presidency, with Mattis calling Iran “the single biggest state sponsor of terrorism in the world”, after Tehran confirmed it tested mid-range ballistic missiles.

Trump himself weighed in on the controversy, posting on social media that Iran “is playing with fire”, as he ordered new sanctions on 13 Iranian individuals and 12 companies. When asked if a military action is possible, he replied, “Nothing is off the table.”

In response, Tehran fired more test missiles, with one commander of the Revolutionary Guard warning that “if the enemy falls out of line, our missiles will pour down on them”.

Iran also warned of “dark days to come” in the case of a military attack.

Saeid Golkar, an Iran expert at the Chicago Council on Global Affairs, told Al Jazeera: “Unfortunately, the relationship between America and Iran is getting very dangerous.

“I think people in the Trump administration will try to make Iran do something stupid,” he said, warning of further US actions, such as more sanctions and support for regime change in Tehran.

What is also alarming is the bluster coming from the Trump White House, Trita Parsi, founder and president of the National Iranian American Council, told Al Jazeera’s Nick Clark.

“If you only have the ability to dial it up, but not dial it down, that is what is most worrisome right now because it could, unfortunately, lead to a military confrontation,” he said, as he called on US officials to establish direct contact with Iranian officials to ease the tension.

So far, none of the senior Trump officials have made any public effort to talk with Tehran.

Like Trump and Mattis, National Security Adviser Michael Flynn – a former military spy chief – is known as an anti-Iran hardliner. Following the recent missile tests, Flynn came out swinging, with the headline-grabbing statement that the White House is “putting Iran on notice”.

As Trump’s campaign adviser in 2016, Flynn had not been shy in expressing his views on Iran, decrying its “consistent bad behaviour”, while calling Obama’s nuclear deal “wishful thinking”.

Flynn also insisted in his Head to Head interview with Al Jazeera’s Mehdi Hasan that Iran was “intent on having a nuclear weapon”, despite proof to the contrary from Iran experts.

Amid this backdrop of hostilities, Mohammad Ali Shabani, Iran Pulse editor of Al-Monitor website, said the possibility of a military standoff “seems far-fetched at this point.

“One should understand that statements and tweets do not constitute foreign policy,” he told Al Jazeera.

Shabani said Tehran’s “regional strategic depth” and the “complete lack of an international consensus on such a potentially disastrous adventure” should dissuade Trump and his men from going after Iran militarily.

“This is not to mention the domestic US side, where you have a public that is unlikely to stomach another quagmire that would make Iraq and Afghanistan look like a walk in the park,” said Shabani.

As for Iran, it is “trying to be a rational actor in foreign policy”, and its officials are “very careful not to give excuse” for the US to launch an attack, said Hamid Reza Gholamzadeh, English editor of Tehran-based Mehr News Agency.

“The two sides are just testing each other,” he told Al Jazeera. “President Trump is trying to bully Iran to take action. Iran is not going to act radically to cause war between the two countries.”

But even without military confrontation, Gholamzadeh said Trump’s rhetoric and the recent ban on Iranians entering the US have already alienated many Iranians and united them against the new US president.

On Friday, hundreds of thousands of Iranians marched nationwide to mark the 38th anniversary of the Islamic Revolution and denounce Trump.

Meanwhile, Hillary Mann Leverett, Middle East adviser to Presidents George W Bush and Bill Clinton, told Al Jazeera’s News Hour that there is a “misimpression” among many American strategic planners that because of US military dominance, it can impose its will “wherever it chooses to”, including in Iran.

“But what they don’t understand, and what has happened over and over again, whether it’s Iraq, Afghanistan, even Vietnam, is that we are not there. We are not in Iran.

“We don’t have much at stake as those who actually live there. So, even a weaker party like Iran, compared to the United States, it has so much more at stake in the Middle East that it can really repel what the US may try to do it.” 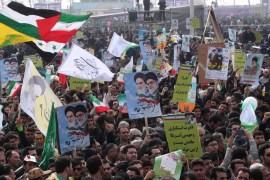 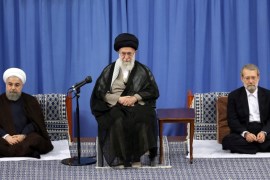