US hip-hop group A Tribe Called Quest and rapper Busta Rhymes have lashed out at President Donald Trump at this year’s Grammy Awards ceremony, calling him “President Agent Orange” and slamming his “Muslim ban“.

In a politically charged performance at Sunday’s ceremony, the formation broke through a symbolic border wall and closed by calling on people to “resist”.

“I wanna thank President Agent Orange for perpetuating all the evil that you’ve been perpetuating throughout the United States,” said Busta Rhymes.

“I wanna thank President Agent Orange for your unsuccessful attempt at the Muslim ban.

“But we come together. We the people!”

The rappers, joined by Grammy-nomiated artist Anderson .Paak, went on to perform A Tribe Called Quest’s latest hit single, We the People.

Joined by a diverse group on stage that included a Muslim woman wearing the hijab, they raised their fists and collectively chanted “resist” throughout the performance. 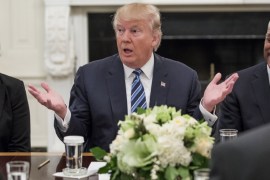 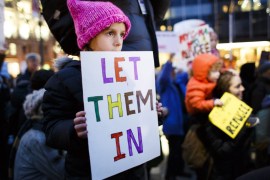 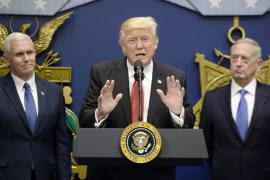