By Elizabeth Melimopoulos and Ali Rae

“I told them I was pregnant, and that I was going to have my baby,” she recalls as other prisoners mill around the courtyard doing their daily tasks.

“I asked them to help me … I kept dialling, but the ambulance never came.”

Four hours later and still in extreme pain and bleeding, Carmen Vasquez says she went to the toilet of a school where she was working.

“When I was in the toilet, I hadn’t even sat when I felt something come down, and I fainted,” she tells Al Jazeera.

After regaining consciousness, Carmen Vasquez says she sat outside the toilet waiting for help, surrounded by her blood, unaware that she had already delivered her daughter and that the baby was stillborn.

Someone else who was in the school at the time had spotted the blood and flagged down a passing police patrol.

that I had killed my baby …. [But] I thought the baby was still inside [me]”]

When the police arrived, they did not give her the medical care or help she so desperately needed.

Instead, they handcuffed her.

“They told me they were arresting me for the crime of homicide,” she recalls.

“A female police officer pushed me and told me “you b***h, you are going to rot in jail.”

Carmen Vasquez, who was 24 years old at the time and pregnant with her second child, says that when the police arrested her, she was still losing blood and had little idea of what was going on.

“I was waiting for them to come to help me because I didn’t have any knowledge, there was a lot of blood, and that was [all I knew].”

“They … [said] that I had killed my baby …. [But] I thought the baby was still inside [me],” Carmen Vasquez says as she recalls a story still vivid in her memory.

She says she was taken to receive medical care after overhearing one police officer say: “The woman is going to die here, take her to hospital.”

When she woke up, she was surrounded by reporters who took her photo and filmed her, but “did not ask … anything”.

It was only months later that a judge found her guilty of aggravated homicide and sentenced her to 30 years in prison.

“When they told me that I was sentenced to 30 years, I felt that my whole world had come crashing down.” Carmen Vasquez says.

She was charged under a strict law in El Salvador that prohibits abortion in any circumstance.

Carmen Vasquez, her lawyers and supporters, including international human rights organisations, say she gave birth to a stillborn baby girl.

But the state accused her of aborting her child.

After 10 years in the squalid and overcrowded Ilopango prison, which houses nearly 10 times the number of people it is designed to hold, Carmen Vasquez hopes that conviction will soon be overturned.

San Salvador’s Second Court of Judgement is set to review her case next week.

One of her lawyers, Katia Recinos who works with the pro-choice group Citizens Association for the Decriminalization of Abortion, says she believes the review will lead to her client being freed.

Recinos tells Al Jazeera that the legal team was able to persuade the court to review the case because the “forensic investigation was not executed correctly”.

“[The Institute of] Legal Medicine established that the baby died due to perinatal asphyxia, but we were able to determine [that] the baby was dead before she was born,” Recinos says.

The lawyer explains that the “incomplete assessment” provided by the forensic doctors at the time combined with the fact that Carmen Vasquez had an ineffective legal team led to her conviction.

The General Prosecutor’s Office of the Republic of El Salvador was not available for comment.

Rights groups say that this has created an environment of suspicion that often leads to women who have suffered miscarriages, stillbirths and other medical emergencies during pregnancy, being falsely accused of having an abortion.

“When a woman goes to the doctor because she has aborted naturally, the presumption of guilt automatically reigns instead of the presumption of innocence,” Alberto Brunori the representative for Central America at the Office of the United Nations High Commissioner for Human Rights (OHCHR), told local media in August.

Under the law, women can be charged with abortion or aggravated homicide.

If convicted of abortion, a woman faces two to eight years in prison. Those convicted of homicide are sentenced to 30 to 50 years.

But she adds that the judge often decides the charge “solely based on the beliefs or gender biases that he has”.

The law has been justified by the country’s Catholic community and right-wing politicians.

Gregorio Chavez, the auxiliary bishop of San Salvador, told the BBC in 2015 that “all human life is sacred”.

He added: “Eliminating it is a murder and if there are two lives in danger, mother and child, we must save the life of the weakest, the son.”

At a 2016 plenary session on the topic of abortion in El Salvador’s Congress, Ricardo Velasquez Parker, of the opposition Alianza Republicana Nacionalista party (ARENA), declared: “If article one of our Constitution establishes that the person is recognised as a human being from the moment of conception, I do not need anybody to come to explain from a propagandist perspective that a … child to be born must pay for the broken dishes in … the unfortunate case of rape.”

“I would remind the deputies of all political forces that there is no Salvadoran that goes to church … that has principles and values that will see in a favourable light, in electoral matters, a deputy who votes in favour of decriminalising abortion,” Velasquez Parker said.

do not understand that most of the time women do not have access to water, electricity and sanitary services. In these communities, many women do not even realise they are pregnant.”]

Recinos says that this sentiment is often echoed in the media.

“Many times, the media portrays them [the women] as murderers of their children,” she explains.

Victor Pena, a journalist who works for the Salvadoran website El Faro, says Catholic families control the two major newspapers in the country.

“Many times journalists have no choice but to follow that editorial line, fearing losing their jobs if they do otherwise,” Pena tells Al Jazeera.

“There is also rampant ignorance about how the lower classes live,” he adds.

“They [the upper-class] do not understand that most of the time women do not have access to water, electricity and sanitary services. In these communities, many women do not even realise they are pregnant.”

But public opinion may be changing.

A 2013 Amnesty International survey found that 74 percent of Salvadorans were in favour of abortion when the life of the woman is in danger.

Over the last couple of years, there have been several protests to support both sides of the debate.

At a demonstration against the strict abortion law in September, 50-year-old Santo Froiland told Al Jazeera that the “problem with El Salvador is that the legislation is made directly by men”.

“All the issues that are there are always favouring men in a macho style, putting aside all the rights women have,” he said.

While Carmen Vasquez’ sentence is one of the harshest, her story is not the only one.

The women and their supporters say they suffered miscarriages, stillbirths or the child died shortly after birth.

The majority of Las 17 are like Carmen Vasquez: Young and poor.

According to the Federation of Feminist Organizations, a network of women’s groups in El Salvador, several of these women arrived at public health facilities bleeding and asking for help. But out of fear of being prosecuted themselves, medical staff contacted the police instead of providing care.

Rights groups say these women are guilty of nothing more than going into labour prematurely or experiencing gestational complications.

“In most cases, these are women without resources who suffer obstetric emergencies or spontaneous abortions [miscarriages] and, when they go to hospitals, they are reported by the medical staff, because they are afraid of prosecution,” Recinos explains.

Their imprisonment doesn’t just affect the women but also their families.

“Most of them are single mothers, their life partners are abroad,” Recinos says.

She adds that before being convicted, many of these women supported their families financially.

Once arrested, the woman’s family often struggles to pay the legal fees to support them in court.

Carmen Varquez’ family is still paying off the fees from her first lawyer 10 years ago.

In 2014, the Citizens Association for the Decriminalization of Abortion, supported by Amnesty International, petitioned the Supreme Court to free the 17 women.

Three – Maria Teresa Rivera, Carmen Guadalupe Vasquez Aldana and one woman identified as only Mirna – have had their convictions overturned.

For Carmen Vasquez and her family, they hope her upcoming day in court will bring the same news.

“The lawyers have done an excellent job, I hope that in this revision, we will be successful, and I can be there, outside, that’s what I wish the most,” she says.

But even if the conviction is overturned, Carmen Vasquez’ sister Cecilia fears for her life.

“I don’t want her to stay here,” Cecilia says.

“First of all, because of the discrimination that she will suffer from the family. Secondly, because the boys, the gang members, I’m scared for her,” she adds.

“She has not been around for 10 years now, once she comes back, they will try to investigate her, to know why was she in jail …. She could easily become a target of these criminal groups.”

Carmen Vasquez says if she is freed, leaving may be her best option.

“I would like to leave and never come back,” she says.

“Because believe me, I believe that my country hasn’t treated me well at all,” she adds. 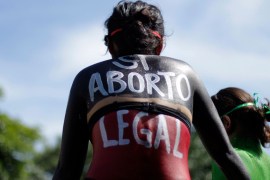 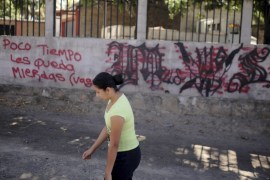 One of the world’s deadliest countries recorded its first day without a single killing since January 2015.