In his film The Coming War on China, John Pilger warns that nuclear war is no longer unthinkable. China’s building of airstrips in the South China Sea has become a flashpoint for war between China and the US.

But China itself is under threat. The US “pivot to Asia”, announced under former US President Barack Obama, encompasses the biggest military buildup since the Second World War.

“American bases form a giant noose encircling China with missiles, bombers, warships – all the way from Australia through the Pacific to Asia and beyond,” Pilger says.

Al Jazeera spoke to the award-winning journalist about what inspired him to make the film. And what has changed since Donald Trump took office.

Watch The Coming War on China

Al Jazeera: What inspired you to make The Coming War on China?

John Pilger: I have reported from Asia for many years. In 2009, US Secretary of State Hillary Clinton declared that the South China Sea was a “security interest” of the United States.

China and the Philippines were then negotiating a dispute over the Spratly Islands – which was near to resolution. Clinton urged Manila to take the issue to an international tribunal.

In 2011, President Obama announced the “pivot to Asia” – which meant that two-thirds of US naval and air forces would concentrate in the Asia-Pacific, the biggest build-up of military forces since World War II. This was aimed, clearly, at China.

Why did you call it the Coming war “on” China, not “with” China?

Pilger: China is surrounded by 400 US military bases; US naval forces are on the doorstep of China. US missiles are pointed at China from Okinawa and southern Korea.

There are no Chinese naval ships and no Chinese bases off California; there is no demonstrable Chinese military threat to the US, though China has made significant defensive preparations since Obama’s “pivot”.

Nothing is inevitable; but provocation can lead to miscalculation, mistake or accident.

What has changed since Trump, who vowed to “make America great again”, came to power?

Pilger: Trump has continued Obama’s “pivot to Asia” policy. During the election campaign, Trump made threats to impose tariffs on Chinese imports but has not followed through. The one significant change is the standoff over North Korea – which is very dangerous. The Trump administration has dismissed the proposal, agreed between China and North Korea and backed by Russia, that North Korea is prepared to negotiate if the US and South Korea withdraw their fleets from North Korean waters.

With Pyongyang launching missiles, should the world be concerned about North Korea?

Pilger: Yes, of course, the world should be concerned about North Korea. But as international polls show, the world is more concerned about the US. Understanding why Pyongyang behaves the way it does is important. It wants a peace treaty that would finally end the Korean War of more than 60 years ago and de-militarise the peninsula. That would lift the threat of a US attack – as North Korea sees it. It would almost certainly ease its state of siege. In the 1990s, Pyongyang and Washington agreed what was known as a Framework Accord that opened previously shut doors and windows. George W. Bush abandoned this.

Are economic factors creating more tension or could they prevent these two powers from going to war?

Pilger: The rise of China’s economy in a generation is phenomenal and barely understood in the West. The US elite – that is, those who have assumed power with the post 9/11 ascendancy of the Pentagon and the national security monoliths – regard American “dominance” of world affairs, especially Asia, as threatened by China’s economic rise.

Do you think war between the US and China is inevitable?

Pilger: Nothing is inevitable; but provocation can lead to miscalculation, mistake or accident, especially when “first strike” safeguards have been removed from the deployment of nuclear weapons. My film is a warning. 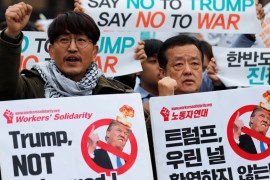 What can Donald Trump offer Asia?

The US president is in Asia, where one country dominates talks: North Korea.