Renowned Kannada poet and author Kuppali Venkatappa Puttappa would have celebrated his 113th birthday today. In his honour, Google paid tribute with a doodle image.

Known by his pen name Kuvempu, he is considered one of the greatest Kannada writers of his time.

The Kannada language is spoken mainly in Kuvempu’s home state in India of Karnataka. 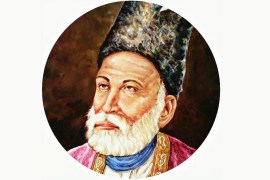 Remembering one of the most popular and influential poet and writers of the Urdu language.