Sand and gravel are the most-extracted materials in the world.

The UN believes that sand and gravel, or aggregates, account for up to 85 percent of all mining activity around the world, measured in weight.

“It’s almost become like air, the air we breathe, we don’t think too much about it, but you can’t live without it,” says Kiran Pereira, the founder of SandStories.org, in the documentary Sand Wars.

While sand might seem like an abundant resource, it is being mined at a pace much faster than its natural renewal rate.

A 2014 report by the UN estimates that globally, more than 40 billion tonnes of sand and gravel are extracted every year.

Here’s how that compares to the production of other natural resources.

Worldwide, the legal sand extraction industry is worth $70bn, roughly the equivalent of the GDP of Kenya.

What is sand used for?

Sand has numerous applications that cut through our daily life.  It’s used for glass and is the source of strategic minerals including silicon dioxide, which is found in wine, cleaning products, toothpaste and many more everyday products.

Sand is also required for manufacturing the microchips inside our computers and smartphones.

But the sector swallowing up the most sand is the construction industry.

More than half of the world’s population now lives in cities. By 2030, the UN expects 60 percent of people to live in urban settlements.

Building and expanding cities requires concrete and asphalt, both made with sand. A lot of it.

The rise and rise of Singapore

Singapore is just one example of a metropolis with a sand addiction.

Between 1990 and 2017, the city state’s population nearly doubled, from three million to 5.6 million.

Reclaiming one square kilometre of land from the sea costs up to 37.5 million cubic metres of sand.

In July 2017, Cambodia banned all sales of sand to Singapore, citing environmental grounds. Malaysia, Indonesia and Vietnam had already put restrictions on sand exports to Singapore. But these restrictions have given rise to a flourishing smuggling trade.

So-called “sand mafias” have proliferated elsewhere, too. According to the Times of India, illegal sand mining is worth $2.3bn a year in Tamil Nadu alone.

Not all kinds of sand are suitable for use in construction. Desert sand is considered too fine. As a result, sand is taken from beaches and dredged up from rivers and the seabed on an industrial scale, adversely affecting ecological systems.

Poyang Lake, in China’s Jiangxi province, is thought to be the world’s biggest sand mine. An estimated 236 million cubic metres of sand is taken out of the lake every year.

Satellite images taken by NASA show how this has changed the landscape of the northern reaches of Poyang Lake.

Drag the slider across the image to see the difference between 1995 and 2013.

NASA reported that sand mining affected the lake’s ecological integrity by “contributing to less predictable seasonal water fluctuations and to a series of recent low water events,” according to ecologist James Burnham.

Dredging sand from the seabed is destroying local flora and fauna. Mining of ocean and beach sands is contributing to the erosion of beaches. In Indonesia, two dozen islands are believed to have disappeared due to sand mining.

“Negative effects on the environment are unequivocal and are occurring around the world,” the UN noted in its 2014 report.

Meanwhile, policymakers have been slow to respond to the depletion of sand. “The current level of political concern clearly does not match the urgency of the situation,” the UN stated.

The world is only slowly waking up to the fact that another finite resource is slipping through our fingers.

Find out more about the disappearance of sand in Sand Wars. 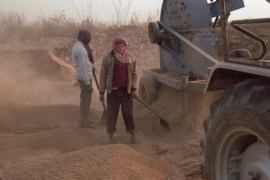 India’s Line in the Sand

India’s construction boom feeds an illegal sand mining industry where gangs stop at nothing in their quest for profits. 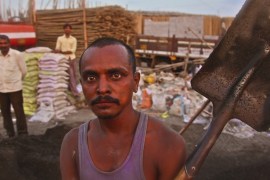 From Mumbai to Tangier, Dubai to the Maldives, this investigation bares an emergency: the world’s sand is disappearing.