Life expectancy in the United States dropped for the second consecutive year in 2016 and is fuelled by a surge in fatal drug overdoses, according to a new report from  the Centers for Disease Control and Prevention (CDC).

As the US is facing the worst drug crisis in its history, a generation of children is being neglected, abandoned or orphaned by parents addicted to opioids.

Children who live in homes where drug abuse is prevalent are often at risk themselves, causing a generational cycle of drug addiction. The rate of drug overdoses among American teens has increased by almost one-fifth in 2015 after years of decline, according to a report by the National Center for Health Statistics.

Alexis Lightle is a 17-year old student from the town of Chillicothe, Ohio. She lost both her parents to drugs and grew up with her grandmother.

I didn’t have much of a childhood.

I got to do a little bit of the normal kid things but I didn’t get to go to the daddy-daughter dances with my girl scouts. I didn’t get to have mummy daughter days because my parents were out of my life for the most part.

My dad was on pills and opiates and my mum was into heroin. My grandma was there for me and that’s the only support system I really had because my parents couldn’t be there for me, whether they wanted to or not.

When I was little, I thought that cigarettes were the problem because nobody tells a six-year-old that her parents are on drugs. I remember my grandmother whispering to my mum, ‘Are you high?’ But up until the 6th grade I didn’t comprehend what a drug was. I knew cigarettes did bad things and that’s why I thought cigarettes must be why my parents are weird, why they’re not around.

The day I found out Santa wasn’t real

In 6th grade, when I was 12 years old, my mum told me that Santa Claus wasn’t real. For me, Santa Claus was kind of like a metaphor for drugs because I finally realised that there’s something more than cigarettes. It was like a loss of innocence for me and the world around me kind of fell apart.

I realised that's what drugs do to people. They turn them into liars and thieves and the worst kind of people.

I knew my parents were on drugs. I didn’t know what kind of drugs, but I knew it, because I had seen the assemblies [at school where they teach about drug use] and it all added up to my parents.

We had this one assembly that really hit me. How the mother was depicted in the video, it really struck home because I was like ‘my mom acts like that.’

So, I kind of figured everything out on my own. I didn’t really have a moment where someone sat me down and told me what was going on with my parents.

‘The drugs were choosing this life for my mum’

My mum and I had a really good relationship for a while, after she had just gotten out of prison. But then she got back with her old boyfriend and because I know that her boyfriend leads to getting back into her old lifestyle, I didn’t want to be a part of it.

For me it was a choice I had made a thousand times before. I’ve gotten used to saying goodbye to my mother.

I asked my mum to choose between a boyfriend and her two kids, and she didn’t choose us – not because she loved her boyfriend, but because she was on drugs. I think that my mum loves us, just not enough. You can’t ever love an addiction away.

Maybe someday she’ll decide to not be with her boyfriend and choose her kids, but maybe she won’t. That’s not a choice for me to make.

Addiction starts with a choice. You consciously make a choice to take a drug, but once you get addicted, you stop getting choices.

I used to believe that you can stop taking drugs whenever you want. But time went on and I saw my mum going in and out of these rehab centres and going through these halfway homes and going into prison, so I was wondering why would anyone choose this life for themselves?

The day my dad died

My dad died of a combination of opiates and prescription drugs. He passed away due to an accidental drug overdose.

I was attending a rehearsal for one of the plays I’m in at school when my grandmother walked in. She took me outside and she seemed a little out of it. I thought something happened to my mum. She was in prison and I thought she got sick because my mum gets sick all the time.

In my opinion, once you're starting to take drugs, you don't really get much of a choice, you're not yourself.

The only bad choice that my dad made in his life was that he took a drug. And that sent him into this addiction and he spiralled downhill and things became less and less his choice. In my opinion, once you’re starting to take drugs, you don’t really get much of a choice, you’re not yourself.

I spent my whole life hating him for things that I didn’t really know anything about. I just hated him. And then, we saw each other once and it was so awkward because I didn’t know my dad. Then we started talking more and more and I got to know my dad for that past year.

My situation is not uncommon. I have one friend whose mum tried to sell her off for heroin when she was just a little baby. So, luckily her grandmother was there to take her in and get her away from that situation.

I know there are kids in my school whom no one ever talks to and you can tell there’s something going on with them, but nobody wants to ask why, because nobody wants to know about the nitty gritty of life.

Their lives are even more precious than my own, I think. When a life is taken away by drugs, it’s just not fair. And even though I treasure the life I have, sometimes I just wish that it could have been better for them.

I’ve lost a lot of people. I lost my father before the age of 16. So, I think I know pain. But I think I know happiness too. I try to look forward in life, even though I know there’s a lot more tragedy laid out ahead.

I mean, the life my mum’s choosing right now isn’t going to end very well. And if she keeps continuing to choose it, I’m going to end up with no parents and that’s just the way things are.

I think it’s becoming more and more common nowadays to not have parents around.

The norm back in the day used to be a mum, a dad and two dogs, two kids. Now it’s maybe a parent, maybe a grandmother, maybe an uncle, maybe a foster home, maybe just a whole lot of maybes. Nothing is set in stone. Nobody really looks at their kid and can say, ‘You’re going to have a wonderful life when you’re older.’ Because they’re not sure anymore.

Ending the cycle: ‘We don’t want to be like our parents’

I’ve been offered drugs several times and I’ve always refused because I can see the effects of it.

I think it’s commonly misconstrued that children of drug ridden parents are destined to be on drugs, because their parents have done the same things and that’s the example they’ve led.

Both my parents were taking drugs, it wasn’t just one of them. It’s shown me more than anything not to take drugs because you can end up six feet under in a graveyard.

At one point my parents were just experimenting with drugs and then one day, 10, 20 years later, my dad is six feet under. And my mum’s not in any contact with either of her children.

People think that’s it getting worse in our town but I think it’s only the adult epidemic that’s getting worse. In my school, the kids that you think are taking drugs say they have no interest. A lot of us just don’t want to be like our parents and we’re a lot more aware of risks and consequences. 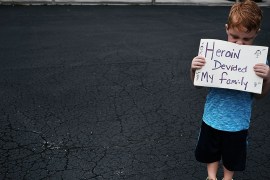 ‘Mum OD’d again’: Children of the US drug crisis 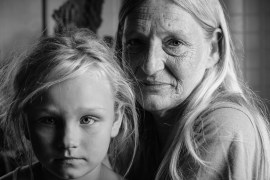 Many grandparents like Tisa Beeler have been left to care for their grandchildren amid the growing US opioid epidemic. 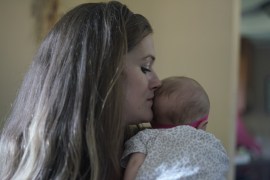 Drug abuse: ‘I watched my babies go through withdrawal’

A recovering addict recounts how her son witnessed her overdose on heroin and her babies were born addicted to drugs. 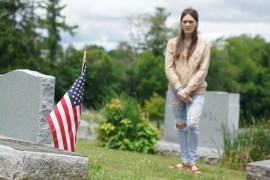