The youngest defence minister in the world and the first in line to the throne, 32-year-old Crown Prince of Saudi Arabia Mohammed bin Salman Al Saud is also the kingdom’s deputy prime minister.

He received his primary education in Riyadh, the country’s capital, where he was ranked among the kingdom’s top 10 students.

He obtained a law degree from King Saud University, where he graduated second in his class. Throughout his time as a university student, bin Salman was enrolled in various training programmes.

After graduation, bin Salman established a number of firms before he became involved in governmental work. He served as secretary-general of the Riyadh Competitive Council, special adviser to the chairman of the board for the King Abdulaziz Foundation, and member of the board of trustees for the Albir Society for development.

As part of his philanthropic work, he also established the MiSK Foundation, a non-profit organisation that works on cultivating learning and leadership among Saudi youth and develops startups in the country through various business incubation programmes.

In 2013, he was awarded the “Personality of the Year” award by Forbes Middle East for his role as chairman of the MiSK Foundation in recognition of his support for Saudi youth and their development.

Prince Mohammed bin Salman embarked on his political journey when he served as a full-time adviser to the Council of Ministers for two years in 2007.

In 2009, he became special adviser to his father, who was governor of Riyadh at the time, and continued to serve the experts commission of the Saudi cabinet as a part-time consultant until March 2013.

The prince was appointed defence minister on January 23, 2015, after his father’s accession to the throne. In the same year, he was named deputy crown prince.

His most notable move as defence minister was leading Operation Decisive Storm, a Saudi-led coalition in Yemen against the Houthi rebels, which was launched two months after his appointment.

Prior to his most recent appointments, bin Salman spent a number of years as his father’s personal aide. He was previously president of his father’s Royal Court when King Salman was crown prince, where he began introducing his own changes.

In addition to his existing roles, Mohammed bin Salman also heads the Council for Economic Affairs and Development, which oversees the kingdom’s economic affairs, ultimately shaping its political and security policies.

In November 2017, four ministers, 11 princes and several high-profile entrepreneurs were detained on orders of MBS in what was presented as an anti-corruption purge. However, the measures targeted many of his direct rivals, thus consolidating the prince’s power over the kingdom.

In December was reported that Israel’s Intelligence Minister Yisrael Katz had invited the crown prince to visit Israel and recommended that peace negotiations between the Palestinians and Israel happen under the kingdom’s auspices.

In April 2016, Prince Mohammed introduced Vision 2030, Saudi Arabia’s vision of the future, which is aimed at making the kingdom the heart of the Arab and Islamic world, an investment powerhouse, and a hub that connects three continents.

The reformative initiative seeks to diversify and privatise the economy, and to make it less reliant on oil. By 2030, the initiative also aims to establish an e-government system.

Prince Mohammed also plans to sell about 5 percent of Aramco, Saudi Arabia’s national oil company. The IPO is expected to raise as much as $100bn, but investors wonder whether Aramco can be valued anywhere close to the $2 trillion figure announced by the crown prince.

He also announced a $500bn plan to create a business and industrial zone extending across its borders into Jordan and Egypt. The 26,500 square-km zone, known as NEOM, will focus on industries including energy and water, biotechnology, food, advanced manufacturing and entertainment, and will power itself solely with wind power and solar energy.

The crown prince has also called for more entertainment options in the kingdom for both families and youth. The cabinet passed regulation to reduce the power of the religious police, and an entertainment authority was established in May 2016.

In his attempt to override tradition, he also engaged younger Saudi Muslim scholars who are active on social media and better known among Saudi youth, as opposed to the kingdom’s council of senior scholars who set official religious policy and often release religious opinions.

“Where the government’s PR has been quite successful is that by emphasising these social reforms and issues like women’s driving, that is really improving the international reputation of the country without actually promising any kinds of reforms where political representation or human rights are concerned,” Jane Kinninmont, a senior research fellow at the Chatham House think-tank in London, told Al Jazeera. 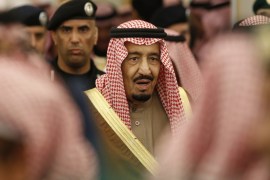 Series of decrees reshuffle Saudi Arabia’s line of succession and host of other high-ranking postings in the Kingdom. 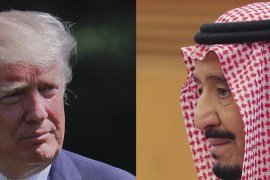 Riyadh will give a warm welcome to Trump this weekend, but it will judge him based on his actions, not his promises.