Almost 600 men refusing to leave because of a perceived lack of security are now drinking water extracted from a well they dug in the sand. The toilets are blocked, and they fear dysentery may soon spread.

The story is not, by any measure, leading every news bulletin. Despite restrictions on reporting from the centre, there has, however, been more interest in the plight of these men this week than there has been in months.

Still, large sections of the public are hostile to the cases of these men; many others are just apathetic.

It’s that pervading apathy – and sense of desperation among pro-refugee advocates – that led 55-year-old Australian Phoebe Crane to go on a hunger strike more than a month ago.

I fly to the small coastal town of Port Macquarie, an hour’s flight north of Sydney, where the former mental health worker is in her fourth week of subsisting only on teas, coffee, and electrolyte-rich coconut water.

“I’m starting to feel really weak,” Crane says, adding she was medically and psychologically assessed before beginning her fast.

“Many people would say you could march, go to vigils, write emails, go on Twitter, Facebook. I’ve done all that. In the end, this matter became so urgent for me that I thought I had to go on hunger strike. Something that Aussies don’t usually do.”

With her husband, she launched a small media campaign. Press releases were written, emails sent to a large number of newsrooms.

But not one major media organisation has picked up on Phoebe’s story.

Journalists and editors are divided as to why.

At a typically small rally for refugees in Sydney this week, a journalist from an international news agency tells me it is because Phoebe is an hour’s flight from Sydney. Times are tough; it’s too expensive to travel.

I’m not sure. Skype has become standard, even in TV reporting.

I get a steer from a reporter at a respected news organisation who has had the “asylum round” of late. When refugees themselves have gone on hunger strike in the past, it has made the news. Why not this middle-aged woman living an otherwise comfortable life?

I try and find out why the ABC, which has a bureau in Port Macquarie, has not covered the story.

I’m told that while Phoebe was on the radar, talk of “self-harm” and issues surrounding women, food, and body image were raised before shying away from the story.

Australian outlets are careful when it comes to issues of reporting self-harm. But the country’s press council guidelines stress that publications have “wide discretion” in publishing.

“But,” it goes on “they should balance the public interest with the sensibilities of their readers.”

An experienced foreign correspondent who has worked for ABC rubbishes concerns around body image and self-harm.

“There’s total self-censorship in the Australian media on refugee issues,” she says. “They don’t want to offend the government and have a Senate inquiry talking about how left-leaning the ABC is.”

“The term ‘advocate’ has become a pejorative in Australia,” she goes on to say. The government has run a “brilliant’ campaign keeping journalists away from refugees and asylum seekers – and the public thus emotionally removed from their plight.

“Australians like to think of offshore detention as an ‘exception’, but it is not. It has become standard operating procedure,” says Peter Mares, an adjunct professor at Swinburne University in Melbourne, a long-time journalist who has written two books on Australia and migration.

Even he was “surprised” Phoebe’s story had not received more coverage.

“If it’s a political protest which she is doing out of conviction, I don’t see why it shouldn’t be reported. We become used to things; things become normalised… We become inured to the impact of the policy,” he says.

But with the growing crisis, there has, finally, been a resurgence of interest, albeit measured.

For her part, Phoebe says she is now being contacted by some refugees asking her to stop fasting, for her own sake. She is awaiting the results of a blood test that will report back on the state of her kidneys.

“When I started it was to get attention for them [the men on Manus],” she says. “But now everyone is talking about what we have known about for four years.”

I depart for the airport admiring her courage, wondering if it will make a difference. 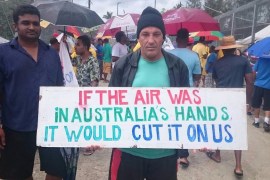 More than 600 refugees will be moved out of the detention camp after PNG Supreme Court ordered the centre to be shut. 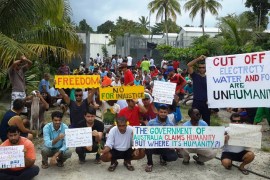 Manus refugees: ‘Death is better than this slavery’