Altaf Sheikh, owner of a popular cafe at Srinagar’s Residency Road – the busiest shopping street in the main city of the disputed region – is worried that India’s Hindu nationalist government wants to bring about demographic change in the Muslim-majority territory.

Hindu nationalists have campaigned against Article 35A enshrined in India’s constitution that bars Indians from buying land in the disputed region.

Sheikh, like other Kashmiris, fears New Delhi wants to settle outsiders and reduce Muslims to a minority.

“Examples of Palestine, Syria, and now Rohingya are before us. Will the world afford Kashmir becoming one of these in the future?” he asks.

An NGO called “We the Citizens” and a think-tank backed by Hindu supremacist Rashtriya Swayamsevak Sangh (RSS) have filed a plea to remove the article.

The Congress party, that has ruled Indiafor most of the past seven decades, had challenged such petitions whenever they were filed in the past.

India couldn't change the demography of Kashmir politically or militarily. Now, it's using its judiciary card

But the federal government, led by the right-wing Bharatiya Janata party (BJP), which also rules disputed Kashmir in alliance with regional People’s Democratic Party (PDP), hasn’t contested the petition, raising fears in Kashmir that the party is finally on its way to abolish these provisions using judicial means.

A new storm is looming over the region that has seen unrest in the past three years amid hardline policies pushed by the government of Prime Minister Narendra Modi.

“I worry about the future of my children. We have already faced worst war crimes here. Kashmiris may mass-migrate,” said Iftikhar Ahmad, an autorickshaw driver.

“But our borders with Pakistan are landmined. Where will we immigrate to?” he asked.

Property rights to the outsiders

Article 35A provision was introduced through a presidential order in 1954 to continue the old provisions of the territory regulations under Article 370 of the Indian Constitution – which denies property rights to the outsiders in the region and allows Kashmir to have its own constitution and a separate flag.

The provisions continue from the time when Kashmir was a separate kingdom ruled by Hindu Dogra rulers. In 1947, when the British colonialists vacated the subcontinent, Maharaja Hari Singh signed the instrument of accession with India that was disputed by Pakistan.

In its original shape, constitutional laws like Article 35A and Article 370 prohibited Indians or any foreigner from entering Kashmir without a permit. Later, such laws were watered down. So, when a Hindu nationalist politician, Syama Prasad Mookerjee, the founding father of Bharatiya Jana Sangh and a precursor to the ruling BJP – entered the state in 1953 without a permit, he was arrested and died in prison.

Mookerjee’s death offered an impetus for the BJP to work on the elimination of Article 35A and Article 370 that continues till today.

“We stand by his (Mookerjee’s) sacrifices. We’ll never back down from his commitment to these provisions,” senior BJP leader Ashok Kaul told Al Jazeera.

Under Article 370, India was supposed to control only communication, foreign office and defence of Kashmir, but over the decades New Delhi has eroded many of the special provisions.

The PDP government in the state, however, is defending the Article in the top court, which will hear the case on Monday.

“We have a strong case. We will strengthen the status of the state, not diminish it,” the PDP spokesperson Waheed Ur Rehman Parra told Al Jazeera.

When asked that its coalition partner BJP was not challenging the petitions, Parra said, “Both parties intend to work for peace and integration”.

“… You may differ in a democracy. We are two different ideologies but it doesn’t mean we can’t co-exist together.”

The PDP has received criticism for its handling of the issue.

Likening a US Supreme Court judgment in a petition regarding a case on civil rights of Indian tribes, Hussain said, “the US court ruled that the question has already been adjudged and is barred by the principals of res judicata to re-examine it.”

Res Judicata means “the matter has already been adjudged” and is sometimes evoked by the courts to dismiss the case for being useless.

“The Kashmir government should have used this case as counter-argument,” he said adding, “also under Res Judicata principle, the Indian court lacks jurisdiction on this case.”

Hussain doesn’t rule out major revolt in Kashmir if the court removes these provisions.

“Situation will arise which arose in the Dred Scott case in the US. That means although the law declared by the top court is binding upon all authorities within the territory of India, yet people have a right to revolt.”

The pro-independence groups say they will call for “massive rage in Kashmir streets” the day the provision is removed.

“India couldn’t change the demography of Kashmir politically or militarily. Now, it’s using its judiciary card,” said Farooq, the head of the moderate faction of All Parties Hurriyat Conference.

Farooq added that the Indian court doesn’t have “any jurisdiction in the disputed territory”.

Kashmiris fear demographic changes are part of New Delhi’s plan to alter the outcome of a future plebiscite in favour of India if it’s ever conducted to settle the sovereignty of Kashmir disputed by India and Pakistan, who govern parts of the territory since 1947.

Majority of Kashmiris want independence or merger with Pakistan to be decided by UN-brokered plebiscite.

Nearly 70,000 people, mostly civilians have been killed since 1989, when the armed uprising erupted.

Armed groups have largely been suppressed by the Indian security forces in recent years. More than half a million Indian troops are stationed in the region where the opposition to Indian rule is now mainly expressed through street protests.

“It’s a bigger game people must understand,” Tickoo, who is based in Srinagar, told Al Jazeera.

An estimated 100,000 Hindus – locally called Kashmiri Pandits – fled the region following the start of the fighting in 1989.

“The impact will of an atomic bomb if these provisions are removed,” Tickoo, who heads an organisation that looks after the welfare of Hindus who remain in Kashmir, said.

“The first to suffer will be Hindus of Jammu, whose businesses and properties will be taken over by the influx of rich Indians,” he said referring to southern Jammu city, where most of the Kashmiri Hindu community fled to.

For common Kashmiris, as Sheikh Showkat, who teaches international relations at a local university, put it: “It’s a matter of life and death.”

“Palestinian territory has been changed by Israel through Jewish settlements. These provisions are a legal impediment in the way of creating settlements in Kashmir.” 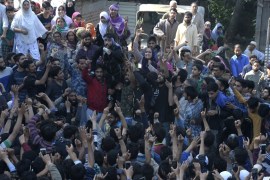 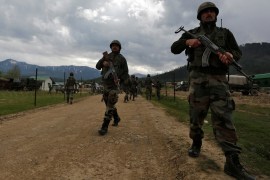