The Catalan parliament on Friday voted to declare independence from Spain, prompting celebrations in Barcelona and a strong response from the central government in Madrid.

The crisis began when Catalans voted to secede from Spain in a banned referendum that was met with police violence on October 1.

As the political crisis unfolds, we answer some of the most important questions about the future of Catalonia.

What next for Catalan leaders?

Speaking after a crisis cabinet meeting to decide Madrid’s measures, Rajoy declared the dissolution of the Catalan parliament and called a snap election in the region on December 21.

Central government ministries will assume directly the powers of the Catalan administration until the regional poll takes place, he said.

Spain’s prosecutor’s office, meanwhile, said it would file rebellion charges against Puigdemont. A court will have to decide to accept the charges.

Under Spanish law, the crime of rebellion can be punished with up to 30 years in prison.

Spain’s Constitutional Court has also started a review of the Catalan parliament’s vote.

How will Spain impose direct rule?

There are many obstacles in Madrid’s way, given that Catalans are fiercely protective of the region’s high degree of autonomy, such as direct control over education, healthcare and the police.

Spain’s government said it was not planning to make any arrests, but it is unclear how it will proceed if the current regional administration staff refuse to leave their offices.

Mossos d’Esquadra, a group of Catalonia’s police force favouring independence, has already said its members will not follow instructions from the central government and will not use force to remove ministers and legislators from power.

Rajoy said the Mossos chief would be fired.

Mossos officers may be replaced by national police, who used heavy-handed tactics to thwart the referendum. Some fear this could lead to physical confrontations.

The Catalan National Assembly called on civil servants not to follow orders from the Spanish government and urged them to follow “peaceful resistance”.

It is unclear whether such calls will be followed or not. Not all Catalans support breaking away from Spain, with polls showing they are roughly split.

How will the crisis affect Catalonia’s economy?

Instability unleashed by the declaration of independence is sure to have economic consequences.

Nearly 1,700 companies have recently moved their legal headquarters out of Catalonia, a region accounting for one-fifth of Spain’s economic output.

The region attracts more foreign tourists than anywhere else in the country.

What does the world think?

Donald Tusk, president of the European Council, said the Catalan parliament’s declaration of independence had changed nothing, adding that the EU will only deal with the central government in Madrid.

“For EU nothing changes. Spain remains our only interlocutor,” Tusk said on Twitter.

For EU nothing changes. Spain remains our only interlocutor. I hope the Spanish government favours force of argument, not argument of force.

The EU has insisted that the standoff in Catalonia is an internal matter for Spain and backed Madrid’s position that the October 1 referendum was illegal.

Madrid’s allies in the EU and the US meanwhile rallied behind Rajoy, voicing alarm over the latest constitutional crisis, and expressing support for a united Spain.

“A political crisis can only be solved through dialogue,” Charles Michel, the Belgian prime minister, said on Twitter.

A political crisis can only be solved through dialogue. We call for a peaceful solution with respect for national and international order

Germany and the UK said they back Spanish unity and do not recognise Catalonia’s unilateral declaration of independence.

“The (German) federal government does not recognise such an independence declaration,” German Chancellor Angela Merkel’s spokesman Steffen Seibert said in a statement posted on Twitter.

“The sovereignty and territorial integrity of Spain are and always will be inviolable,” he added. “We hope that those involved will use all available opportunities for dialogue and de-escalation.”

UK Prime Minister Theresa May’s office said Britain “does not and will not” recognise the Catalan regional parliament’s declaration of independence, which “is based on a vote that was declared illegal by the Spanish courts”.

But the Scottish government, led by the pro-independence Scottish National Party, criticised Spain for refusing dialogue and said imposition of direct rule by Madrid “cannot be the solution”.

The United States has also backed Madrid’s efforts to keep the country united.

“Catalonia is an integral part of Spain, and the United States supports the Spanish government’s constitutional measures to keep Spain strong and united,” State Department spokeswoman Heather Nauert said in a statement. 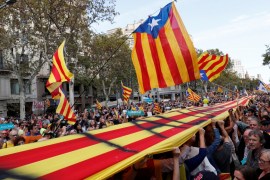 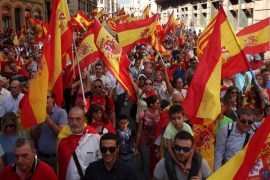 The Catalan crisis is not just about nationalism

What is happening in Catalonia is a symptom of much larger crisis that liberal democracies are suffering from.