Bangkok, Thailand – The day most Thais have been dreading has arrived with the capital adorned in mourning black, as a final farewell is said to the late King Bhumibol Adulyadej.

The funeral ceremony lasts for five days and is full of Buddhist and Hindu traditions, interspersed with the sound of jazz and classical music, written by the late monarch.

On Thursday, tens of thousands of people were on the streets directly outside or near a funeral site that artisans have crafted over the past 10 months, transforming an area known as Sanam Luang from a public green space into an elaborate collection of buildings and symbols of King Bhumibol’s reign.

The centrepiece is a purpose-built crematorium that towers some 50 metres into the air.

The funeral is taking place just outside the gates of the Grand Palace, where the King’s body has rested for the past 12 months.

In that time, it became the focal point for grieving Thais wanting to pay their respects. The Palace says that since he died in October last year, around 12 million people took the opportunity to enter the hall where his body lay to pray in front of the royal urn.

The palace was expecting around 250,000 people to fill the streets around Sanam Luang, but the number of people lucky enough to be alongside the procession was strictly controlled and those entering the area were subject to security checks.

Everyone was clad in black, and with the sun beating down upon them, many succumbed to the heat, having to be assisted by the hundreds of medical staff dotted around the area.

For those who can’t get close to the procession and funeral site, big screens were been set up alongside replica crematoriums and large portraits of the King where mourners can lay flowers.

This is also proving to be a time of reflection for Thais on how far the country has, or hasn’t, come and what’s around the corner under a new king, Bhumibol’s only son Maha Vajiralongkorn, who ascended the throne soon after his father’s death.

Freedom of speech has become increasingly curtailed during this sensitive time, with well over a hundred people in jail for allegedly insulting, criticising or defaming the monarchy – a crime punishable by up to 15 years in jail on each count.

The number of cases has soared since a military coup in 2014 that many believe was staged to ensure a smooth royal transition.

The cases have become more extreme, even farcical, with one man arrested for insulting the late king’s dog, while a well-known historian was charged for daring to question the events surrounding a famous battle that occurred more than 400 years ago, involving a Thai king’s defeat of an invading Burmese prince.

The use, or some say abuse, of the so-called lese majeste laws, and decades of elevating and promoting the monarchy by Bangkok’s elite, the military and the palace itself, mean there is no space for overt alternative opinions on the royal family or its role in Thai society. Offering one will almost certainly result in a jail sentence.

But there are signs that this period of profound change is providing a window for experts and commentators to not only reflect on the life of King Bhumibol and his achievements, but to also question where the country is heading.

Writing in the Bangkok Post the day before the funeral, former editorial-pages editor Sanitsuda Ekachai wrote: “We must ask ourselves if our deep grief is a result of over-dependence. The time of loss is then a time to also grow up. Questioning the status quo and taking action for change is a necessary part of this.”

Regardless of one’s view on the monarchy, one fact remains: King Bhumibol Adulyadej was a constant for Thailand through sheer longevity on the throne. For 70 years, he was there during the Cold War, domestic political upheaval, natural and economic disasters.

Now that he’s gone, grief will be mixed with uncertainty. 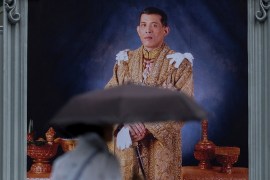 From love to fear: The rise of King Vajiralongkorn 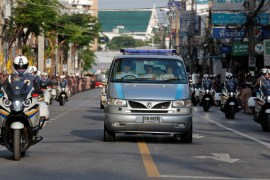