I was born into a family that cares for the dead.

For more than 90 years, they have watched over funerals in our small Canadian hometown. My great-grandfather established the family business in 1926 and both my grandfather and father have carried forward his legacy as independent funeral directors.

We grew up in a home where death was an appropriate dinnertime discussion, where dearly departed pets always received professional send-offs and where we were encouraged to confront our own mortality and taught that death is not something to be terrified of or obsessed over. It should be acknowledged, understood and respected.

But death remains a taboo subject in the Western world and much is misunderstood about funeral directors, those who care for us at the end.

The public often sees only the tailored suits, polished cars and price tags on caskets. They don’t understand all that funeral service involves and the toll that’s taken by witnessing the awful sights and tragic scenes, by suppressing your emotions while you shoulder others’ grief and help them through the worst days of their lives, nearly every day of your own.

They certainly don’t realise just how many funeral directors are suffering. I didn’t either.

While working on our film, Death in the Family, we came to learn that mental illnesses, including depression, vicarious traumatisation and post-traumatic stress disorder (PTSD), are prevalent among funeral professionals, but most suffer in silence.

‘That’s part of our job’

Caleb Wilde is a 35-year-old funeral director from Parkesburg, Pennsylvania and the author of a popular blog called Confessions of a Funeral Director, along with a recently released book by the same name.

His family has owned their funeral home since 1850 and Caleb is the sixth generation to work there. But he struggled when he entered the industry.

“I found myself unprepared for the sights, the stress and the work schedule that goes along with the funeral business,” he says.

“It took me a while to realise what was happening, but I was depressed. I had a lot of suicidal ideations. I thought about different ways out of the business and that was one of the options.”

Wilde believes that funeral education leaves many unprepared to deal with the psychological challenges they will face in their careers.

Wilde sought help and, while he still struggles sometimes, he eventually got better through therapy and a conscious effort to reframe his interpretation of death.

“Most of us have a narrative about death where we see it as entirely negative and we don’t look for the experiences that are beautiful and positive,” he says. “We don’t see the times where death brings people closer together. We don’t see the love, the vulnerability that happens in death that happens nowhere else.”

Just as death is taboo in Western culture, so too is mental illness, and while opening up has become more accepted in some professions where the psychological risks are higher, funeral directors are still very much in the shadows, reluctant to show emotion and admit when they are hurting.

Wilde believes that the professional culture around funeral service discourages people from speaking up.

“We’re expected to repress ourselves. That’s part of our job. We’re supposed to be stable so we can guide and direct everybody else. If you aren’t, it’s looked down upon,” he says.

“The gatekeepers in the funeral business tend to be older white men in their 60s and 70s. Their generation has been taught that showing your emotions or even getting help is a sign of weakness.

“When I expressed my struggles with the funeral industry, some people told me that I’m unfit to be a funeral director. The assumption being that if you aren’t able to repress your emotions then you’re not cut out for it,” he says. “But that’s b******t.”

Pam Moss is a former minister from Markham, Ontario who experienced burnout and compassion fatigue. She became a funeral celebrant and soon recognised many of the same symptoms she experienced in the funeral directors she worked with.

“I recognised the same look in the eyes of many funeral directors and their stories quickly came pouring out as I would ask the simple question, ‘Are you ok?’ Clearly, they were not and had not been for a long time, but didn’t feel safe to express that.”

“Very naively, I asked what support was in place, making the assumption that there was support, only to hear from everybody, ‘There is nothing.'”

In the absence of proper support, Moss says, “Their coping strategies were alcohol, drugs, sarcasm and denial … The fact that they were angry, cynical and jaded was their norm and some thought that that was fine.”

“Some were just emotionally void,” she says. “They were shut down. They weren’t feeling anything.”

Moss went on to become a bereavement educator and participated in a landmark conference on mental health in funeral service at Humber College in Toronto in 2016 where several established funeral directors shared their struggles with a crowd of their colleagues.

“Once they did that, the floodgates opened,” Moss says. “Pardon the pun, but funeral directors are dying for this.”

“People at the conference were saying, ‘Okay, this is real, and it doesn’t mean I’m weak or not cut out for this job’. Finally, someone is hearing them and making them realise that vicarious traumatisation is real.”

“I’ve had funeral directors in their 70s come up to me with tears in their eyes and tell me about the family they served 25 years ago that still haunts them,” she says. “But they come to me privately, they don’t often say it aloud.”

Greg Armstrong is a former paramedic turned chaplain who provided first responders with crisis intervention support inside the perimeter of Ground Zero in the immediate aftermath of 9/11.

That experience gave Armstrong a, “heightened awareness of the need for and the benefit of mental health intervention,” and he now works with a Canadian organisation called, Tema, that provides support and resources for first responders suffering from PTSD.

While Tema works mostly with firefighters, paramedics, police officers and members of the military, they have also provided support for funeral directors and Armstrong participated in the Humber conference.

“Knowing what they’re exposed to, I certainly have concerns for their mental health,” he says.

“What they’re feeling are normal reactions by normal people to abnormal events. Working in the funeral industry is not a normal environment.”

My father tells me that suicides and the deaths of children have always been the hardest cases for him to deal with.

He admits now that when my sister and I were young and he would come home from the funeral of a small child, he would go to our rooms and hold us tightly while we slept.

In small towns like ours, many funeral directors bury their own neighbours, friends and family members, and my father has overseen the funerals of my mother’s parents, a cherished cousin and his own father.

He acknowledges that in taking on professional responsibilities during a personal loss, he didn’t always allow himself the space to grieve properly.

At times, I’ve seen him worn down by the long days, sleepless nights and missed family moments that are inevitable because death has no business hours.

But we have been lucky. Perhaps through a combination of family and community support and a positive outlook my father has been able to avoid the burnout and depression that plagues so many others.

“I believe that we appreciate life more because of what we have seen in funeral service,” he says.

“We see tragic situations, situations where we think, ‘That wasn’t fair for that to happen to that family.’ You’re very aware of what can happen. It reinforces what’s important in life.” 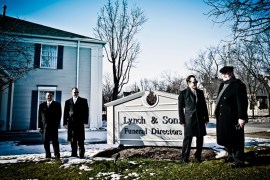 The funeral industry’s poet laureate Thomas Lynch on life, death and the beauty of the words in between. 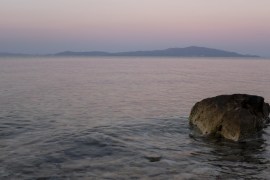 The woman who washes the dead

The story of two women – a Palestinian Bedouin and a Syrian refugee – as one prepares the other for burial.