At least four US cities are joining dozens of states and cities across the US that have replaced Columbus Day with Indigenous Peoples’ Day as the tug of war between rival views of the country’s history stretches on.

The move by Austin, Texas, Salt Lake City, Utah and Los Angeles and San Luis, California comes as part of a growing movement to change Columbus Day – celebrated on the second Monday in October – to Indigenous Peoples’ Day as a way to recognise the oppression of Native Americans and celebrate their contributions.

“It’s very important to get rid of Columbus Day, to get rid of any celebration of Columbus because he was not a hero,” said Mahtowin Munro, the lead organiser for Indigenous Peoples’ Day Massachusetts, an organisation campaigning to get statewide recognition.

OPINION: Christopher Columbus – The myth that keeps on giving

“We know for a fact that [Columbus] and his men killed, raped, enslaved thousands of Indigenous people. It also gives a completely wrong impression to say that Columbus ‘discovered’ America; as Indigenous people, we often say that he invaded America,” Munro told Al Jazeera.

“We were not sitting here waiting to be discovered by anybody.”

In addition to the city of Los Angeles, LA County has also passed a resolution this year that will replace Columbus Day with Indigenous Peoples’ Day.

Hilda Solis, who authored the LA County motion, slated to take effect in 2019, saw the change as a way to acknowledge the contributions of Native Americans.

“It’s never too late to do the right thing,” Solis told Al Jazeera.

“My action was about publicly recognising our true and complete history: that America’s ancestors, for centuries, oppressed certain minority groups,” she added.

“While we cannot change the past, we can realise and remember the pain that millions suffered throughout our nation’s history. We can also recall the tremendous achievements of the original inhabitants of our continent.”

Columbus Day, celebrated on the second Monday of October, was officially recognised in 1937 by President Franklin D Roosevelt.

He called Columbus a “brave navigator” and praised “the promise which Columbus’ discovery gave to the world”.

The day is celebrated most widely by the Italian-American community, which marked Columbus Day long before it became a national holiday, and sees Columbus as a cultural icon.

In 2016, the Order Sons of Italy in America started a petition for an official capital luncheon and White House evening reception “in recognition and endorsement of Columbus Day and the contributions of the 25 million Americans of Italian descent”.

The group said in the petition that the holiday “represents not only the accomplishments and contributions of Italian Americans but also the indelible spirit of risk, sacrifice and self-reliance of a great Italian icon that defines the United States of America.”

Recognising Columbus’ place in Italian-American culture, the motion passed in LA County also took steps to celebrate and recognise the “positive contributions of Italian-Americans to [US] culture”.

“My motion also designates October 12 [the date of Columbus’ landing in America] of each year as Italian American Heritage Day in the County of Los Angeles,” Solis said.

Berkeley, California was the first city to officially recognise Indigenous Peoples’ Day in 1991. Since then, more than 50 cities, states and universities have followed suit.

However, the idea first emerged much earlier in 1977 at the first International NGO Conference on Discrimination Against Indigenous Populations in the Americas, held in Geneva, Switzerland.

Early campaigning saw Indigenous Peoples’ Day as a way to acknowledge the suffering of Native Americans, but, recently, the tone has become more celebratory.

“One is to talk about the legacy of colonisation and genocide and the spread of diseases; the other is to use the occasion to take a more positive approach, talk about the importance of diversity and the richness that cultures can bring. You want to have people feel like they can be a part of that.”

For Utah Senator Jim Dabakis, who led a failed attempt to get Indigenous Peoples’ Day recognised by the state legislature in 2016, the issue is also a local one.

“The connection for Utah is much more about the 50,000 indigenous people who are living in Utah and the ancestors who were here for thousands of years, rather than Christopher Columbus who never even visited Utah, never came close.”

“It’s a much better thing to celebrate the people who are here, rather than this man with a chequered history,” he told Al Jazeera.

For Native Americans today, the rebranding of Columbus Day is more than just a symbolic act.

“Federal Indian policy is built on the false Doctrine of Discovery, and it’s been part of it since the early 1800s,” said Montana State University’s Fleming, referring to the 1493 decree by Pope Alexander VI, which gave Spain exclusive rights to all land discovered by Columbus as the sponsors of his voyage.

“Most indigenous people don’t accept the idea that America was discovered by Columbus,” Fleming said.

Those who advocated changing Columbus Day to Indigenous Peoples’ Day argue it is also about educating non-Native Americans about the history of the US before the arrival of settlers.

“We often say Indigenous peoples are erased in this region because many non-Native people do not seem to realise that we are still here, nor do they acknowledge the Indigenous history,” Munro said.

“Through Indigenous Peoples’ Day, we can focus the conversation away from the genocide that was started by Columbus and his men, and instead to the ongoing resilience and resistance of Indigenous people throughout the Americas”. 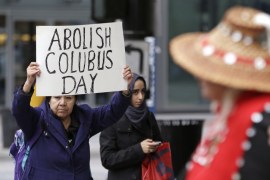