Cox’s Bazar, Bangladesh – Rohingya trapped inside Myanmar say thousands are starving and in need of medical care in northern Rakhine State, where a half-million majority Muslim ethnic Rohingya have fled an army crackdown and communal violence.

Abdulla Mehman, who works for an aid agency in the Buthitaung Township, said more than 2,000 people in his village, Kwan Dine, had run out of food, with many others facing shortages.

“We are not allowed to move about freely, and people are struggling to survive,” Mehman told Al Jazeera by telephone on Tuesday.

“Some people are starving.”

The reports are difficult to verify independently, as the region has been under an army lockdown, but the witness accounts are in line with what Rohingya refugees in neighbouring Bangladesh have been telling Al Jazeera.

About a half-million Rohingya are thought to remain in Myanmar’s westernmost state.

“Please help us,” a Rohingya woman from the village of Kin Taung, speaking on the condition of anonymity, begged in a telephone conversation this week.

“We are sick, but we cannot seek medical treatment. We cannot work and we cannot eat.”

A group of 20 diplomats who visited northern Rakhine on an official tour on Monday described the humanitarian situation there as “dire”, and urged Aung San Suu Kyi‘s government to resume “life-saving services without discrimination”.

People could die in Rakhine State if aid does not arrive soon, Human Rights Watch said.

The Myanmar government could not be reached for comment.

It has previously promised to deliver aid to communities affected by the violence.

Accounts by refugees pouring into Bangladesh of mass killings, gang-rapes, and burning of whole villages has led the UN to accuse the Myanmar government of ethnic cleansing, a claim it denies.

The woman in Kin Taung told Al Jazeera that soldiers had threatened to rape the civilians and burn down homes of Rohingya, and were extorting money, food and cattle from them.

Her family had to bribe soldiers to keep their homes safe, she said.

Nay San Lwin, a Rohingya activist based in Germany, said northern Rakhine was “like a prison” and that thousands of Rohingya were continuing to flee their homes after the army intensified a campaign of intimidation and arson this week.

Paul Seger, Switzerland’s ambassador to Myanmar, who joined the government tour of Rakhine, posted a video on Twitter of smoke rising from some villages on Monday.

He also posted a video of shuttered shops and deserted streets in the once-bustling town centre of Maungdaw.

The office of the army chief Min Aung Hlaing, in a Facebook post on Thursday, blamed the fresh bout of arson on the Arakan Rohingya Salvation Front (ARSA).

In some areas, the violence has ebbed, but Rohingya said they lived in fear.

“The situation is calm now, but we cannot go to the shops to buy necessities because we are afraid the Buddhists may beat us,” Abu Tayeb, a teacher in Bura Shida Para in north Maungdaw, said by telephone.

“We cannot get adequate food and we cannot pray [at the mosques].”

Peter Bouckaert of Human Rights Watch told Al Jazeera that he was “concerned” by the lack of information about the hundreds of thousands remaining in Rakhine.

He added: “It is imperative that the Myanmar authorities give full humanitarian access to northern Rakhine or people will die.”

Mehman, the aid worker from Kwan Dine, said he will not flee even when his food reserves run out next week.

“Bangladesh is not my country,” he said. “The government wants to push us out. I don’t want to leave, even if I have to eat leaves.” 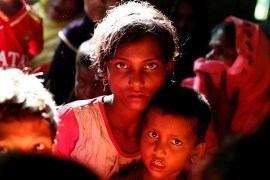 Foreign minister says a delegation from Myanmar offered to take back hundreds of thousands who fled army violence. 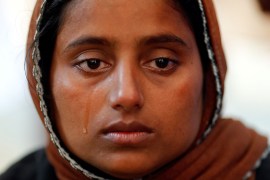