Cox’s Bazar, Bangladesh – The Rohingya refugee boat was metres away from safety in Bangladesh when a huge wave upended it, throwing Nur Fatima and her nine-month-old son into the choppy surf.

She grabbed the edge of the boat with one hand and held her son with the other.

“We went under four times and I saw the bubbles coming out of his mouth as he died,” she told Al Jazeera on Saturday, her face impassive as she recounted the September 28 disaster that reportedly killed more than 60 refugees.

Most of those feared dead were women and children.

At least 23 bodies have been recovered along Inani Beach, a popular tourist spot in Bangladesh‘s Cox’s Bazar, and among them was Fatima’s son, Saiful Rahman.

The 20-year-old mother of two and her family were fleeing an army crackdown in Myanmar‘s Rakhine State, which the UN said amounted to ethnic cleansing.

More than half a million Rohingya have emptied out of northern Rakhine and into Bangladesh since August 25, carrying stories of mass killings, gang rapes, and razing of whole villages.

“It’s very clear that people are quite desperate to flee,” said Kitty McKinsey, a spokeswoman for the UN refugee agency (UNHCR). “And clearly they are risking their lives to do so.”

Fatima lost eight members of her family on the voyage to Bangladesh. Twelve survived, including her husband, three-year-old son, and brother-in-law Nurul Salam.

Al Jazeera met Salam at a Bangladeshi fisherman’s house, hours after the boat capsized near Inani Beach. In shock and exhausted, his voice was hoarse and he kept nodding off to sleep. His wife and only son had drowned that day.

“I tried to hold on to my son, but I couldn’t,” he said, too exhausted for tears.

On Saturday, Al Jazeera caught up with Salam’s family at the Kutupalong camp, a vast and squalid tent city, which houses more than 200,000 refugees. They had spent the night at a UNHCR shelter in Kutupalong.

Salam covered his face and broke down into dry sobs, as he described his two-year-old child’s drowning. “He went under six times, and every time I saved him. And every time he called out to me, ‘baba’.”

Fatima, wincing in pain, said she held on to her son’s body even after his death, letting him go only to save herself. Her arms and thighs were covered in bruises, she said, and her breasts were sore and heavy with milk.

Their family had fled Myanmar in mid-September when the Myanmar military allegedly razed a village near their home in Mwai Daung in the Rathetaung township.

Myanmar has denied allegations of ethnic cleansing, saying the military offensive was a “clearance operation” to flush out Rohingya fighters who had staged attacks on border posts in August.

Myanmar considers the Rohingya illegal immigrants from Bangladesh despite the ethnic minority living there for generations.

Salam’s family left behind 6.5 hectares of paddy fields, and only took a few clothes, blankets, bulbs, all of their gold and 500,000 Burmese Kyat ($366). They trekked for three days through the foothills of the Mayu mountains to Go Zon Dia, a border village where the Naf River flows into the Bay of Bengal.

There, they boarded a packed and rickety fishing boat organised by a relative in Australia. Thousands remained on the Naf’s mud flats as they set off.

Most refugee boats departing Go Zon Dia dock at Shah Porir Dwip, a Bangladeshi fishing village two hours from the Myanmar coast. But their boat got lost when Myanmar soldiers opened fire, Salam said, causing the captain to take to the open seas, where they remained overnight and through the next day.

IN PICTURES: Rohingya mothers and babies – Hungry and traumatised

“The weather was so rough. It rained all day. We didn’t eat anything,” Fatima said.

Compounding their misery, the boatmen forced them to throw their belongings, including food, overboard, and attempted to seize their cash and gold, Salam said.

Later that afternoon the captain, fearing Bangladesh border guards, refused to anchor at Shah Porir Dwip, Fatima recalled. Instead, he took them further west, and was looking to come ashore at an unguarded point when the boat capsized.

This was not the case for most sea voyages, the International Organisation for Migration (IOM) said.

Hala Jaber, an IOM spokeswoman, said a majority of the fishermen only asked for the cost of fuel and that most Rohingya were surviving the journey.

“A lot of people from Bangladesh from the areas near the border are doing this because they want to help,” she said. “Everything we know is that these people are really feeling for the Rohingya.”

In Kutupalong, Fatima’s family now faces an uncertain future as they try to rebuild their lives.

“We lost everything,” she said.

Clutching her surviving son Abdul Rahman to her chest, she added: “We lost members of our families, our homes and our neighbours.

“I hope the world community will ensure us justice.” 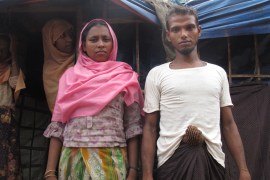 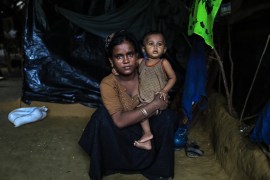