Bishkek, Kyrgyzstan – Remote and landlocked, Kyrgyzstan is framed by the Tian Shan mountains that take up nearly 90 percent of the country’s territory and form its border with China’s northwestern province of Xinjiang.

Xinjiang province is home to several Muslim Turkic ethnic groups, the largest being the Uighur, making up 46 percent of the area’s population.

The historical tensions between the community and the Chinese government have flared-up in recent decades, receiving attention from the international media and rights groups. As many as 700 Uighur have died between 2013 and 2014 alone, according to the Washington-based Uyghur Human Rights Project (UHRP).

Uighur communities in China say they suffer repression at the hands of the Communist government, and demand greater religious and cultural autonomy. The Chinese authorities deny any wrongdoing, though they insist they are working against religious extremists and separatists with links to “terrorism”, al-Qaeda, and other armed groups.

The conflict has spilled over China’s border to the former Soviet republics of Central Asia, where, in August, the Chinese embassy in Bishkek was subjected to an attack that injured three employees of the diplomatic mission. The Kyrgyz authorities accused the East Turkestan Islamic Movement (ETIM), a Uighur separatist group, of orchestrating the attack.

But, this attack against Chinese interests in the region is not new, similar incidents have taken place on numerous occasions over the last decade. In a previous such incident, two Chinese government representatives were killed and another injured in an apparent attack in 2000 in Kyrgyzstan. And two years later, a Chinese diplomat and his driver were shot dead in Bishkek. The Kyrgyz authorities blamed Uighur fighters for both attacks.

There is a significant Uighur community in Kyrgyzstan. Uighurs migrated to Kyrgyzstan from Xinjiang in the mid-1950s, says Rosjan Kurbanov, head of the “Ittipak” ethnic Uighur cultural organisation’s chapter in south Kyrgyzstan, seeking to escape repressive Communist rule in China.

“Our parents came to this country and Kyrgyz people accepted us very well. They allocated land to our fathers, so Uighurs could build homes in Kyrgyzstan,” Kurbanov told Al Jazeera. “And so many years have passed since then. Now, we have our grandchildren born here.”

Central Asia’s post-Soviet republics have become a second homeland to an estimated half-a-million Uighurs, the majority of whom settled in Kazakhstan and Kyrgyz Republic. There are reportedly more than 250,000 Uighurs living in Kazakhstan and close to 50,000 in Kyrgyzstan.

Alisher Nasrakhunov, chairman of the Uighur council of elders explained that the violent incidents involving Uighurs are a big concern for the community.

“Surely, we know from news reports about conflict between Chinese authorities and the Uighur population in China,” he told Al Jazeera. “This is, of course, regrettable. Conflicts disrupt the peaceful life of the population. Therefore, we reject violence,” Narakhunov said from his office in the southern city of Jalal-Abad in Kyrgyzstan.

“But we are not in the position to make assessments of what is taking place in China. Every country has its own policy on certain issues. That is why we think that we cannot evaluate these processes from outside.”

Beijing’s Strike Hard campaign in Xinjiang during the 1990s and emergence of the political ties between the Central Asian states and China after the demise of the Soviet Union has added pressure on the Uighur communities of Kazakhstan and Kyrgyz Republic to respond to actions carried out by the members of the Uighur community.

China is concerned that the conflict in Afghanistan presents a threat to the stability of China’s western province.

Nicolas De Pedro, Research Fellow at the Barcelona Centre for International Affairs says the issue of Uighurs was always part of the China’s policy towards Central Asia.

“It is a key factor to explain the rapid rapprochement between Beijing and the newly independent republics after the collapse of USSR. Beijing was interested in putting an end to the Soviet policy of traditional support and sympathy for the Uighur activism, particularly in Kyrgyzstan, Kazakhstan and Uzbekistan,” De Pedro told Al Jazeera.

For Kazakhstan and to a lesser extent, Kyrgyzstan, the control over the Uighur community is an asset to bargain for better deals with Beijing on border and trade, De Pedro said. “The Central Asian republics are not interested in becoming a safe haven for Uighur exiles.”

“Growing up in the 1980s and later in the 1990s, I witnessed Kyrgyz state security service agents come to speak with my father who was a Uighur community activist back in those days,” he says.

He thinks that after the latest bombing incident, things may get worse for the community.

“When we celebrate a holiday or attend a wedding, we only talk about business, family or friends because politics is not something Uighurs in Bishkek want to discuss,” the trader tells, explaining that the community is wary of surveillance.

The security service of the Kyrgyz Republic (GKNB) declined to comment to Al Jazeera regarding allegations of state policies towards the community of Uighurs in the country.

Steve Swerdlow, Central Asia-based researcher for Human Rights Watch says the situation for Uighurs who are Chinese nationals in Central Asia is complicated by the fact that there are large populations of Uighurs who have long resided in the region and are citizens of the post-Soviet Central Asian states.

“While there’s no official information on the surveillance of these communities, Human Rights Watch is aware that the security services of the Central Asian states, including Kazakhstan and Kyrgyzstan, do conduct surveillance on Uighurs, closely monitor their borders, and keep tabs on all those they might perceive to be sympathetic to or involved with the Uighur cause for greater autonomy,” Swerdlow told Al Jazeera.

“For those of us who were born in Kyrgyzstan, the conflict in Xinjiang is something that we may share only among very close friends, but not in the public, because you never know whether an informant is next to us or among us,” the trader said. “In a way, we, Uighurs who are citizens of Kyrgyzstan, are in a better position than Uighurs in Xinjiang because the Kyrgyz government deports Uighur Chinese citizens upon China’s request.”

The Kyrgyz ministry of interior and GKNB did not respond to Al Jazeera’s request to comment on alleged deportations.

Leaders of the Uighur community are concerned by past Kyrgyz government and local media efforts to tie Uighur activism with “global terrorism” and separatist organisations in Xinjiang.

“Let us ask ourselves: ‘What good does it serve attacking the Chinese Embassy in Bishkek?’ It certainly doesn’t do any good for local Uighurs and those living in East Turkistan [Xinjiang province],” said Kayum Masimov, former head of the Uighur Canadian Association in Montreal.

“The Chinese Communist Party will further clampdown on Uighurs and justify its heavy-handed rule in the region,” Masimov told Al Jazeera.

Many Uighur community organisations have condemned violent act against Chinese interests in Kyrgyzstan.

“We are against extremist ideas and terrorism. This is a concern for our peaceful lives here. It will only bring negative feelings,” said Alisher Nasrakhunov. 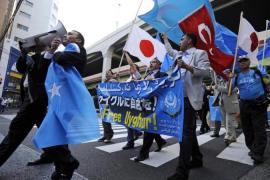 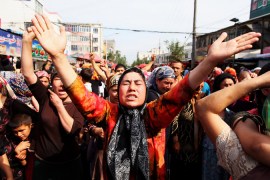