Mexico City, Mexico – A sudden and drastic increase in fuel prices has sparked protests and discontent across the country, threatening to further destabilise an already weak economy and unstable political system.

The price rise – or gasolinazo as it is known informally in Mexico – was announced by Treasury Secretary Jose Antonio Meade on December 27, less than a week before it took effect on January 1.

The spike in prices provoked panicked runs on petrol stations in the last week of 2016 as business owners, transport workers, and others rushed to buy petrol and diesel before the new year.

OPINION: Mexico – Neither Pax Mafiosa, nor rule of law

Jose Antonio Vazquez Gonzalez, a Mexico City taxi driver, told Al Jazeera he stocked up on fuel when he heard the price was going up.

“They won’t let us charge more, so I bought some gas to put aside before they raised the prices,” he said. “A lot of my friends are doing the same thing. I’m keeping it in water jugs in my garage.”

The first protest against the gasolinazo was organised over social media and took place on January 1, the day the higher prices went into effect. The demonstration was small by Mexico City standards, but the protesters were loud and angry. After arriving for the march they decided to shut down a nearby petrol station.

Ramiro Ramirez, a car mechanic, told Al Jazeera that the protest was the first he ever attended. As the group argued over strategy, he urged other demonstrators to take bold direct action.

“It’s time for us to do what they do in other countries,” Ramirez said. “We should set the gas stations on fire.”

Ramirez, like the other protesters, is not only worried about needing to pay more for petrol but also for all the other products he fears will become more expensive as a result.

“When the price of gasoline goes up, the prices of a basic goods basket, as well as other products, also goes up,” he said. “They’ve been raising the prices for a long time, but after a while you get sick of it and you need to go out and demonstrate your inconformity.”

Analysts expect the move will aggravate inflation for an already weak peso as higher fuel costs drive up prices across the economy, especially in agricultural goods and construction.

Although the Treasury secretary promised that gasolinazo would not boost inflation, others – including Mexican central bank head Agustin Carstens – predicted it will rise to 5 percent.

In the first few days of 2017, newly formed groups organised over social media began staging protests and shutting down petrol stations across the country, while labour organisations blocked major highways. In addition to demanding cheaper fuel, the marchers called for the resignation of President Enrique Pena Nieto.

Frustrated attempts by protesters to steal petrol led to riots and the looting of convenience stores and shopping centres around the Mexico City area.

One police officer was killed after being struck by a vehicle while trying to stop the looting. In the southern state of Tabasco, protesters ransacked and burned an Oxxo convenience store. Oxxo is the largest Mexican convenience store chain, and will probably become one of the main beneficiaries of the opening of Mexican fuel markets to private investment in February.

Hundreds of people have been arrested.

The price hike is the penultimate step in a process of liberalisation of Mexican fuel prices that is part of Mexico’s energy reform. If all goes according to the government’s plan, fuel prices will remain at their current elevated levels until February 3, when price controls will end and private companies will begin to import and sell fuel competitively.

The government justifies the price hike by pointing to rising international petroleum prices related to the late 2016 OPEC production cuts. However, critics say the Mexican government often applies this kind of free-market logic in an unbalanced way.

Pena Nieto has said “the consequences would have been far more painful” if the decision had not been made.

At an occupation of a Pemex gas station on Tuesday, economist Carlos Cabrera pointed out to Al Jazeera that the record low oil prices between 2014 and 2016 did not mean cheaper petrol for Mexicans.

“That’s the neoliberal hypocrisy,” he said. “We’re a petroleum-producing country; now that the prices are going up, that should theoretically benefit Mexico, it should generate more income, so it’s ridiculous that they are putting these costs on our backs.”

Cabrera said part of the problem is Mexico’s dependence on the United States for refining. Even though Mexico is a major petroleum producer, it needs to buy petrol and diesel from US refineries at international market rates, priced in increasingly expensive US dollars.

“To take advantage of the high prices, Mexico needs to refine our own gasoline,” said Cabrera. “That would generate incredible income, and it would also give us cheap gas. We are, after all, a petroleum-producing country.”

Laura Carlsen, director of the Centre for International Policy’s Americas programme, is sceptical that gasolinazo can really be fully justified by the relatively minor increases of international petroleum prices in the last few months. Instead, she suspects the price hike is a strategy to raise government revenue.

“Pena Nieto has a budget crisis on his hands,” she said. “The government needs more money, and Pena Nieto is willing to absorb the political cost of this unpopular measure to fix the budget problem.”

Mexico’s budget for 2017, already historically austere in terms of spending cuts, planned for an average exchange rate of 18.62 pesos per dollar over 2017, a projection that already seemed overly optimistic when the budget was approved in November.

On Thursday, Mexico’s central bank set the exchange rate at 21.37 pesos per dollar, 15 percent higher than the government’s projection. The weakness of the peso against the dollar is one factor that could create massive budget deficits that could be filled by higher petrol prices.

“Pena Nieto understands the damage it will cause, but he thinks it will be better in the long term,” said Carlsen. “He might be right about how serious the budget problem is, but he’s fixing it at the expense of the poorest and most vulnerable Mexicans.”

Pena Nieto has been a historically unpopular president, and throughout his term, calls for his resignation have come up in response to his handling of the 2014 Ayotzinapa mass disappearances, his perceived weakness during his meeting with then-US presidential candidate Donald Trump, and claims he plagiarised his university thesis.

Carlsen said the opposition to the fuel-price surge has more potential than any of these controversies to become a sustained mass movement.

“When people are seeing reductions in their purchasing power due to specific policies, they’re going to do something about it,” she said. “The government should be ready to deal with the consequences.” 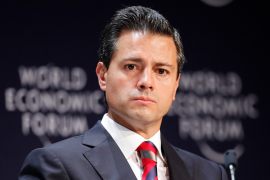 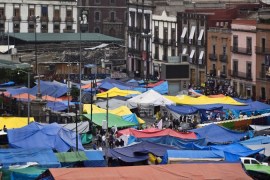