Los Angeles, United States – The few blocks of Iranian American-owned businesses on Westwood Boulevard known as “Little Persia” were busier than usual on the Sunday after US President Donald Trump signed an executive order barring people from Iran and six other Muslim-majority countries from entering the country.

Families and friends poured onto the street outside Saffron & Rose Ice Cream Shop. And there isn’t usually a long wait at the iconic Shaherzad Restaurant, a culinary stalwart in a community that mostly came here from Iran following the tumultous 1979 Iranian Revolution and the Iran-Iraq War, but today, there are no free seats. Families are gathered around plates of stew, grilled meats and rice dishes. Some diners are students from the nearby University of California, Los Angeles.

There were a number of protests across the city – at the federal building nearby, at churches, at the airport where people of Iranian origin were detained.

But few people in the area wanted to talk about the executive order. They are here to eat with friends and family. They are here to forget, some say, the reality that some of them are now effectively stranded in the US – citizens of the affected countries have been advised by legal aid organisations to cancel international travel plans; they can leave, but it’s possible that they won’t be allowed back.

“Certainly, what’s worrying us is the sudden change without precedent,” said a man in his 20s who asked to be called Dan, so as not to affect his citizenship status.

“Over the past week, I haven’t even been able to concentrate on my work. Right now, I don’t know what my next move would be, but I’m considering leaving the country,” said Dan, who is an Iranian working at a tech company in the US.

Trump reminded him of the former Iranian president, Mahmoud Ahmadinejad.

“The campaign that Trump ran was word-by-word copied from Ahmadinejad,” he added, explaining that Ahmadinejad also ran on a populist platform and, he said, drove the country’s economy to a state that is only just being repaired by current President Hassan Rouhani.

“Things are going to really get worse and the next president is going to have to undo everything that Trump does.”

Responding to hate with affection

At Gallery Eshqh (or Love Gallery) business-owner and artist Bahman Bennett, 68, sells Sufi designs and words of boundless love printed in warm, saturated colours on garments, carved into iPhone cases, stamped onto throw pillows. He says he is doing with his art what protesters of multiple ethnic identities are doing, miles away at the airport: offering up overwhelming shows of affection in response to hate.

“If everyone comes together and supports each other against this matter, [the government] can see,” he said.

Arash Saedinia, 43, an Iranian American English professor and rights activist, has been on the frontlines of the demonstrations at Los Angeles International Airport (LAX).

“Last night’s protest was phenomenal. We saw black, brown and white people, young and old, hijabs and yarmulkes. The crowd was as diverse as this city and so we know that the opposition to Trump’s order is widespread and vigorous,” he told Al Jazeera via email.

“It’s important to emphasise the intersectionality of the protest, in both composition and content. We’re in solidarity in our support of all affected by this disgraceful, unconstitutional order.”

“The vast majority of Iranians in Los Angeles have at least one family member, friend, and/or colleague who is a permanent resident, who travels abroad as a green card holder, who visits the United States to see loved ones, who is literally designated a resident or nonresident ‘alien’ by the United States government,” Saedinia said.

But for Bennett, where there is love, there is hope. “Everything will be back to normal in a month,” he said, emphatically. “I’m sure, 100 percent! The government is not going to give him permission to do something like that to the people [that is] against the law in America. Because he’s new, he wants to show he’s different. But nothing [will be] different. The rule [of law] and the policy is from before, he is supposed to follow it.”

Mitra Ebadolahi, an attorney with the American Civil Liberties Union advocacy group chapter in the southern Californian city of San Diego, talked to Al Jazeera from New York’s JFK Airport, where protests broke out over the detention of people arriving from the seven countries.

“Within hours, an army of lawyers and Americans who treasure fairness and decency had mobilised to halt this executive order,” Ebadolahi said. “We will continue to resist. Hear this, Trump administration: We will not allow you to shred our precious freedoms and destroy our beloved constitution. If you insist on violating our laws, we will see you in court and on the streets.”

Still, Bennett will not be leaving the country any time soon. “As long as the government does things like that, I’m not going to trust them,” he said. “I can go easily, but will they let me come back? They’ll say, ‘Oh you have a beard, stay out.'”

Of a handful of business owners who spoke to Al Jazeera, Bennett was the only one who would go on the record.

“Many people are afraid to talk out right now,” said one store owner, explaining that he worried the publication of his name would jeopardise his citizenship. The store owner’s fears over citizenship and safety are reflected in several American communities protesting against the ban across the country.

“It’s unconstitutional!” proclaimed one “Little Persia” visitor, who asked to be identified only as Rahim, offering no further comment on the matter. 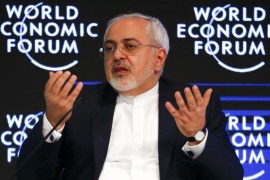