It’s dark outside and Kyriakos Papadopoulos fills out his boat’s log inside a small, dimly-lit cabin.

“It’s a nightmare, this agony …” he sighs, his voice worn out and distant.

“Everywhere we went, there were people in the water. The only thing I’m hoping is that there is no one missing,” he continues, his gaze darkening as the memories of yet another grim day flood back to him.

These closing sequences are as powerful as every other scene in Daphne Matziaraki’s film 4.1 Miles, nominated this week for an Oscar in the Best Documentary Short category.

Over 21 minutes, Matziaraki captures the efforts of Papadopoulos, a Greek coastguard captain, as he and his small crew rescue men, women and children in the waters surrounding the island of Lesbos – just 4.1 miles from the Turkish coast – in late 2015.

The footage is captivating and hard-hitting, often unnerving. In one particularly poignant scene, Papadopoulos’ boat is gradually filled with frightened, wailing children as a handful of crew members frantically tries to pull to safety dozens of refugees, one-by-one.

But not everyone makes it.

“Oh my God, she has two children with them,” a panicked voice is heard screaming, as a mother falls back into the rough sea with her son and daughter.

Instantly, there is chaos, tears and desperation.

The crew eventually manages to rescue the family, but the children are unconscious. The camera pointedly stays away, capturing from afar the frenzied efforts of Papadopoulos and his crew as they pump the small bodies in a bid to bring them back to life.

“I had never seen so many people, so many children, so many families being so scared,” Matziaraki tells Al Jazeera.

The Greek filmmaker, who made her debut with award-winning 4.1 Miles, joined Papadopoulos and his team on their boat for three weeks, but all the rescue scenes included in the film are from October 28, 2015 – her first day on the ship.

“That day wasn’t very different to every other day that followed,” she recalls, “but I was so shocked by what I witnessed in that first time.

“I think this is really conveyed in the footage, and I really wanted the audience to have this experience in the same way that I had it.”

Matziaraki was in the United States when her country – already struggling after years of a deepening recession – was confronted with a worsening refugee crisis, the worst since World War II. During 2015, some 600,000 people made the crossing from Turkey to Lesbos; across Greece, the figure topped 820,000.

California-based Matziaraki, who has also worked as a journalist in East Africa and Europe, decided to return home to shoot a documentary that would “bridge this gap between our everyday lives, where we are in a safe comfort zone, and what is actually happening out there in the real world”, she says.

Yet upon arriving in Lesbos, she encountered a situation far worse than what she had imagined.

“There were just four Greek coastguard boats, with four-five crew on them, and one helicopter from the European border patrol – and that was it,” the young director says.

“The scale of the emergency was so big that I would expect tonnes of helicopters and ambulances and big boats rescuing these people – but there was no help. I just couldn’t believe that nobody in the world was providing a safe passage for these people and they were just letting them drown.”

Instead, it was people like Papadopoulos – whose jobs up until that point simply involved routine border patrols around Lesbos – who were charged with responding to the massive crisis.

“You cannot even begin to compare the numbers,” the captain says in the film. “Every hour that goes by, 10 of us are asked to rescue an influx of 200 people [from Turkey].”

Moreover, most of the coastguard crew did not have CPR training, while their boats lacked basic equipment to deal with such emergencies, according to Athens-born Matziaraki.

“The Greek coastguard was not prepared or equipped to undertake this,” she says. “They felt alone and abandoned; the captain thought that the entire world is turning their backs to this crisis, and they are leaving this overwhelming burden to be carried by them.”

At one moment in the film, Papadopoulos recalls the arrival of 20 Afghan refugees to Lesbos in 2001, describing it as the biggest news of that year.

Back then, things used to be easy, he says, “under control”, but today everything has changed – including his own life.

“It’s an overwhelming and a haunting nightmare that the captain is going through,” says Matziaraki of Papadopoulos, whose daily rescue operations – sometimes more than five a day – have saved the lives of thousands of refugees.

“The burden is more than he can handle, and that comes not from the intensity, but from a feeling of duty.

“He is a truly honourable man who has a real sense of responsibility that he cannot afford to lose one person – and the people and the children that he does lose really haunt him.”

In the months after Matziaraki shot 4.1 Miles, arrivals in Lesbos and other Greek islands sharply decreased, mainly due to a series of Balkan border closures and a controversial EU-Turkey deal aimed at stopping the flow of refugees into Europe – an agreement that has been widely criticised both by aid groups and United Nations agencies.

“It may be that some time has passed since I shot that film, but it couldn’t be more timely and relevant,” Matziaraki says, citing the collapse of the EU-Turkey treaty and actions such as US President Donald Trump’s executive order banning refugees from entering the country.

“At the moment, I feel we are in a very dark place in the world, so it’s very hard to be optimistic because of the developments in the US and Europe.

“But it’s very optimistic that the Academy chose to honour the film because it means that at least in the world of cinema, art and journalism there is a huge recognition that this is a really important story that is affecting all of us,” she says.

“Its choice echoes the message of the film that we are really interconnected and that we are all the same.”

The Academy Awards’ ceremony will be held in the US city of Los Angeles on February 26. 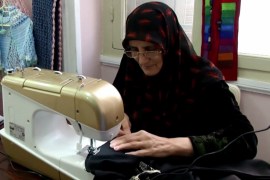 Refugees in Greece work together and build communities 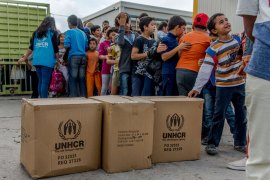 Nearly 1,500 refugee children in Greece attended school for the first time since safely arriving in the country. 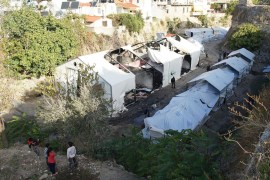