New York, United States – Up until he was inaugurated as United States president this month, opinions were divided over whether Donald Trump would come good on his hard-line campaign pledges to tighten US borders, scrap Obamacare and exit free trade deals.

One week into his presidency and it has become clear that Trump meant business. He hit the ground running with a flurry of executive actions that won cheers from his Republican admirers but alarmed liberals, environmentalists, minorities and others.

US presidents issue executive orders, memoranda and proclamations to take legally-binding action without asking lawmakers. Some have immediate, real-world consequences; others just get the ball rolling on policy shifts. Others still are never heeded.

According to the Congressional Research Service, executive actions are not defined in the US Constitution, but are “an inherent aspect of presidential power”. They can have the same effect as federal law, but Congress can also override them with new laws. So can future presidents.

Al Jazeera spoke with experts about the documents Trump signed on his White House desk this week to assess what effect they would likely have on the world’s biggest economy and its friends and rivals overseas.

After Trump’s rainy inauguration ceremony on Friday, he quickly directed government agencies to freeze regulations and start weakening Obamacare, the signature healthcare policy of his predecessor, Barack Obama, a Democrat. Trump campaigned hard against the Affordable Care Act, which is broadly unpopular among Americans. His order directs officials to “waive, defer, grant exemptions from, or delay the implementation” of some Obamacare provisions, but it remains unclear exactly how Republicans will repeal and replace it.

“I sobbed,” Donna Smith, director of Progressive Democrats of America, a campaign group, told Al Jazeera. “I thought: here we go, putting me, my husband and millions of other families in that uncertain place, insecure about our access to healthcare.”

On Monday, Trump signed an order formally withdrawing the US from the 12-nation Trans-Pacific Partnership (TPP). He called the move a “great thing for the American worker”. While campaigning, Trump had blamed trade deals such as TPP for closing down US factories, and increasing crime and joblessness in rust belt towns. The pact, which the US had signed but not ratified, was also unpopular among Democrats.

Criticism mostly came from overseas. The 2015 deal took five years to broker and was seen as a trade bloc for US allies that would check China’s rise. After Trump’s order, critics lamented Washington’s waning clout in Asia. Australia and New Zealand contemplated renegotiating the deal to include Beijing.

Lori Wallach, from the liberal advocacy group Public Citizen, urged Trump to ditch other trade deals based on the “damaging model” of TPP. Wallach told Al Jazeera that Trump’s new trade agenda should create jobs in the US, raise wages, reduce the deficit and protect the environment.

OPINION: What’s next after the US withdrawal from the TPP?

That same day, Trump re-instated the so-called “Mexico City policy”, issuing an executive order barring foreign aid or federal funding to global aid groups that promote or provide abortions as a method of family planning. The policy has been a political football since the 1980s; Obama lifted it at the start of his presidency in 2009.

Anti-abortion rights groups were thrilled by Trump’s move; those supporting women’s choice were furious. Officials in the Netherlands predicted a global funding shortfall of $600m over the next four years and announced plans for their own fund to help women continue to access abortions in the developing world.

Trump showed his friendliness to the oil industry on Tuesday by signing orders smoothing the path for the controversial Keystone XL and Dakota Access oil pipelines, which respectively link Canada and North Dakota with US Gulf Coast refiners. Obama halted Keystone XL in 2015 amid environmental concerns.

Last year, Obama ordered a comprehensive environmental review of the $3.8bn Dakota Access pipeline before the final section was completed beneath a lake near the Standing Rock Sioux reservation, amid protests by Native Americans and others. Trump said he wanted to expedite such environmental reviews.

On Wednesday, Trump came good on his headline campaign pledge, ordering the building of a multibillion dollar wall along the 3,200km US-Mexico border and signalling tough action against the roughly 11 million undocumented immigrants in the US, mostly Latinos. Trump says the wall will stop drugs, crime and illegal immigration to the US, adding: “A nation without borders is not a nation.”

He also ordered the hiring of many more US immigration agents and the stripping of federal cash from so-called “sanctuary” states and cities that harbour paperless immigrants, such as New York, Los Angeles and Chicago.

On Thursday, Mexican President Enrique Pena Nieto cancelled his planned trip to meet Trump in Washington later this month in the face of demands from the US president that Mexico pay for the border wall, possibly via a 20 percent import tax on Mexican produce.

6. It does not stop there

As of Thursday, the Trump administration had signed 13 executive actions. Others, not listed above, dealt with cutting regulations on US manufacturing, a freeze on hiring new government employees and other issues. More are in the works. Most widely anticipated are new orders on national security, refugees and visa rules.

According to one draft order, Trump was expected to block refugees coming from war-torn Syria and to suspend the entry of any immigrants from seven mostly-Muslim countries: Syria, Sudan, Somalia, Iraq, Iran, Libya and Yemen. He was also expected to order a review that could lead to bringing back a CIA scheme for holding suspected terrorists in secret overseas “black site” jails where water-boarding and other forms of torture were used.

“Washington has exported violence to the Middle East for decades and now Trump moves to refuse sanctuary to those forced to flee the consequences of that violence,” Arun Kundnani, a New York University scholar, told Al Jazeera. “It is hard to imagine a greater hypocrisy.” 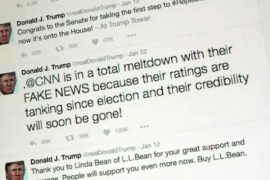 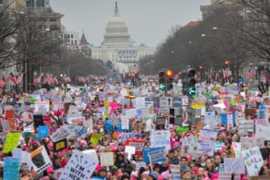 Sexual assault in the time of Trump

Eight years of progress and funding for programmes countering sexual violence against women are about to be undone.