British scientists say they have conducted an unprecedented, long-term study showing a link between Roundup – one of the most widely used herbicides in the world – and severe liver damage in test rats.

The research sparked further debate in the international scientific community over the potential health hazards to people caused by exposure to the well-known weed killer.

Scientists from King’s College London, whose findings were  published in the journal, Nature , earlier this month, said their tests used cutting-edge technology to demonstrate that “extremely low doses” of the herbicide administered to rats through their drinking water had caused “non-alcoholic fatty liver disease (NAFLD)” over a two-year period.

NAFLD can lead to more serious liver disease such as cirrhosis, and increases the risk of other illnesses including diabetes, heart attacks and strokes.

“The study is unique in that it is the first to show a causative link between consumption of Roundup at a real-world environmental dose and a serious disease condition,” the report said.

In recent years, there have been an increasing number of studies alleging links between herbicides – used to help grow genetically modified crops – to a wide range of health issues including birth defects, reproductive and neurological problems, cancer, and even DNA damage.

Monsanto, the maker of Roundup, has repeatedly denied the accusations, insisting the product is safe for humans.

A number of scientists and researchers say there has been insufficient evidence to prove herbicides cause health problems for people.

READ MORE: WHO – Monsanto herbicide unlikely to cause cancer

Robin Mesnage , a research associate at King’s College London, Department of Medical and Molecular Genetics, who took part in the study, told Al Jazeera how highly advanced methods helped analyse the effects of the herbicide on rats’ health.

“Metabolomics and proteomics allows detection of hundreds or even thousands of molecules at the same time, which is much greater than other techniques. So we could clearly see what is happening in the organs,” Mesnage said.

In the report, the researchers highlighted that glyphosate, a chemical compound that is the main component of Roundup and has been described as a “probable carcinogen” by the World Health Organization’s International Agency for Research on Cancer, was administered in “ultra-low doses” – well below the exposure level permitted for humans.

“The dose of glyphosate from the Roundup administered was thousands of times below what is permitted by regulators worldwide,” it said.

“Regulators worldwide accept toxicity studies in rats as indicators of human health risks. Therefore, the results of this latest study may have serious consequences for human health, and thus warrant careful consideration by regulatory agencies and further investigation by toxicologists.”

In addition, the study concluded that regulators should reconsider current safety limits for glyphosate.

Cathy Milbourn, a press officer for the US Environmental Protection Agency, told Al Jazeera the study by the King’s College London team is currently “under review” by the government agency. It is also still investigating whether glyphosate-based herbicides are safe for human exposure.

In a statement sent to Al Jazeera, Monsanto denounced the study and accused King’s College London researchers of using “flawed data” from a similar study published in 2012, which was retracted by the journal Food and Chemical Toxicology.

Monsanto also criticised Mesnage and Gilles-Eric Seralini, who both took part in the latest study, for their involvement in the retracted report, which the company claimed was “pseudoscience”.

However, a statement by A Wallace Hayes, editor-in-chief  of the journal Food and Chemical Toxicology, said the data used in the previous study was “not incorrect” – but “inconclusive”.

“Unequivocally, the editor-in-chief found no evidence of fraud or intentional misrepresentation of the data … The retraction is only on the inconclusiveness of this one paper,” it added.

The retracted study was later republished by the scientific journal Environmental Sciences Europe.

Michael Antoniou , a research leader based at King’s College London’s department of medical and molecular genetics, who led the latest study, told Al Jazeera the bodies of the same rats from the previous study were analysed for the new report.

Wayne Parrott  is a professor and researcher at the University of Georgia’s Agricultural and Environmental Sciences Department who was not involved in the King’s College London study.

“They did not declare the ages of the rats, which is a key factor in how their bodies are affected by the doses of Roundup,” said Parrott.

“The higher the dose, the bigger the effect … If you really want to show the effects of the chemical, you have to give the different aged animals different levels of it, and you have to show ages are affected differently.”

He added a cause for concern was that the specific rat species – called the Sprague Dawley – was prone to tumours, an attribute that could affect its health condition.

Antoniou countered, however, by saying: “The ages of the rats were declared in a preceding publication in 2015 … which also predicted liver and kidney damage and found that age was not a confounding factor.

“By adhering to the old adage, ‘The higher the dose the bigger the effect,’ Parrott is ignoring established science in the field of endocrinology, which has shown that very low doses of chemical pollutants can have potent disruptive effects on the hormone system, with serious negative health consequences.

OPINION: Monsanto versus the people

“The criticism that the wrong strain of rats was used in the study is also totally unfounded. Sprague-Dawley rats are by far the most frequently used strain used in chemical toxicity studies by both those in academia and industry for regulatory purposes. In fact, Monsanto commonly uses this strain for its own tests on GM crops and glyphosate.”

Dave Schubert is a medical research scientist and professor at the Salk Institute for Biological Studies , which develops drugs for various diseases and conducts toxicology and animal studies related to medicine in the United States.

With no involvement in the study, Schubert told Al Jazeera the King’s College London researchers used the same technologies and methods to test the herbicide as the US Food and Drug Administration would require for a human drug.

Schubert also said that there have been reports of a correlation between the increased use of herbicides, the level of glyphosate found in people’s bodies, and a rise in the prevalence of liver cancer.

“The amount of glyphosate detected in people’s bodies has gone up exponentially … It has been found in people’s blood, urine, body tissues, almost everywhere,” he said.

The chemical compound has been “found in all types of foods in the United States, from cereal and beer to baby food”, Schubert added. 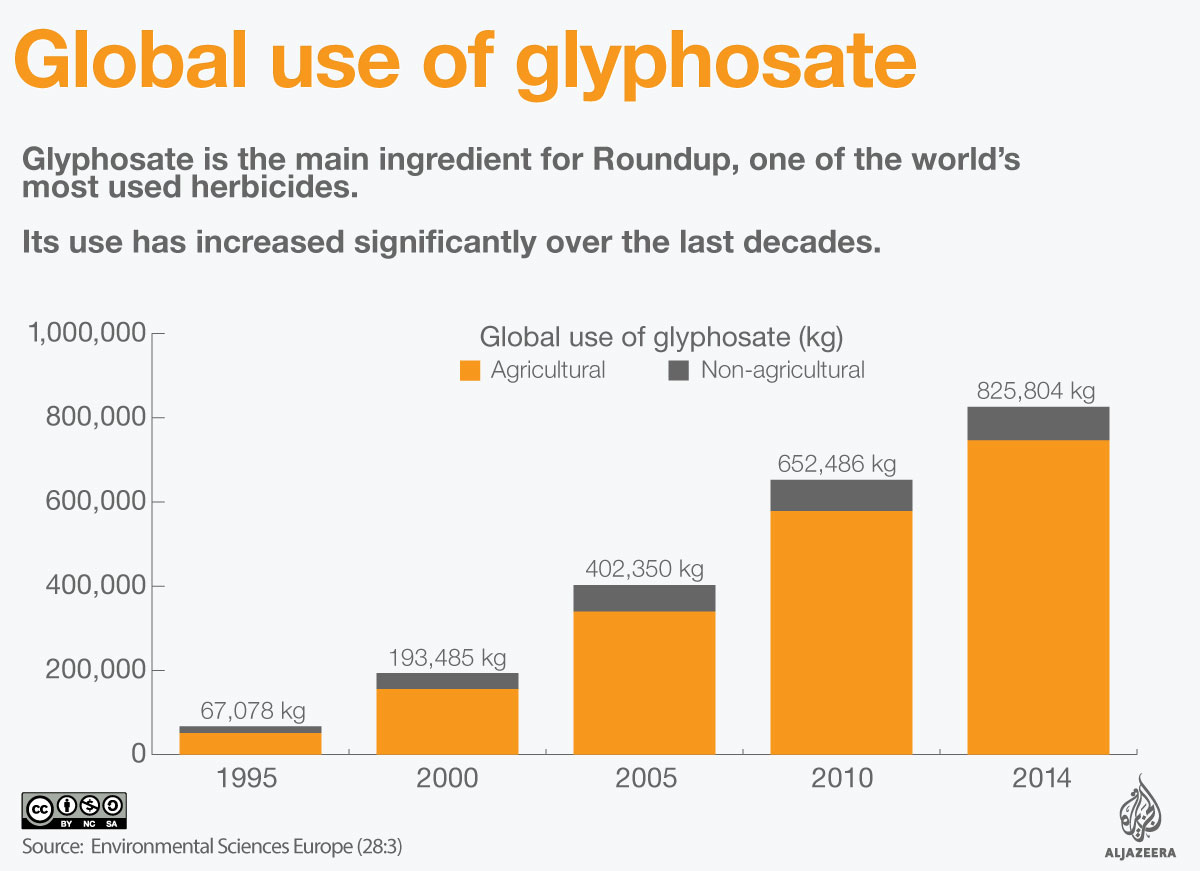 He blamed increased herbicide resistance of genetically modified crops, as well as the use of herbicides to rapidly kill cereal crops such as wheat, oats, and barley to speed up harvesting, as two key factors for the rise in human exposure to herbicides through food.

INSIDE STORY: Should Americans be told what to drink? (25:16)

Leonardo Trasande , a professor of pediatrics, environmental medicine and population health at the NYU School of Medicine, and member of the NYU College of Public Global Health, told Al Jazeera he worried most about how the human intake of the herbicide could harm babies and children most.

“This study raises serious concerns about the consequences of Roundup in our daily diet … Early studies suggested minimal exposure, but increasingly newer studies are showing more detectable exposure because of the more widespread use of Roundup,” he said.

“Roundup exposure from GMO foods can have serious health consequences, especially for children who eat more food per pound of body weight and whose developing organs are uniquely vulnerable to toxic chemicals.

“And in pregnancy and childhood, that may be more problematic to the effects of disruptive chemical exposures.”

Trasande added that there needed to be more studies in order to determine the impacts of herbicides on human health.